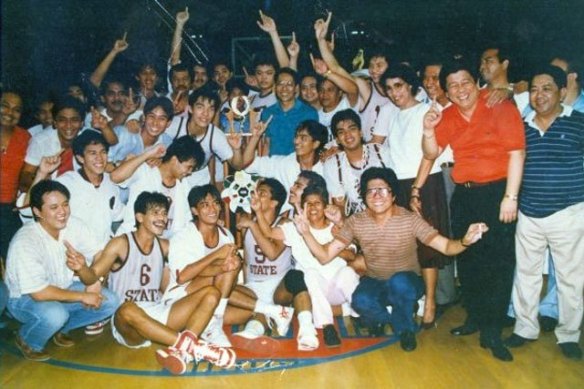 I HAD a whole other column lined up for this Monday, but that’s going to have to wait after last Wednesday’s titanic ballgame—you all know what I’m referring to, that heart-stopping semifinal do-or-die clash between the Adamson Soaring Falcons and the UP Fighting Maroons for a spot in the UAAP finals. Without a ticket to the live game at the Araneta Coliseum, I watched the nailbiter on a giant screen at the UP Theater with 2,000 other maroon-shirted fans, and screamed my head off as shrilly as the girls around me when UP sealed the 89-87 win with a shot in the closing seconds.

I can’t say that I’m a huge basketball fan—I hardly know what’s going on in the NBA or PBA—but I’m a big fan of school spirit, and have cheered for UP since my mother (BSE, 1956) indoctrinated me by playing a 78 rpm record of “UP Beloved” and “Push On, UP” every day when I was a boy. I do have to confess that I wore green and sat with DLSU last season, having reconnected with my grade-school classmates, but UP just wasn’t a serious contender then.

The victory over the Falcons sent me scurrying back to my UP history files, the last time we had been in the UAAP basketball finals having been 1986, when we emerged champions. Since then it’s been a long and frustrating story of losses and thwarted ambitions, reversed only this year by the Maroons’ Cinderella appearance in the finals which began last Saturday.

I dug into UP’s unpublished history and discovered some interesting factoids—one of the most interesting and rather unfortunate tidbits being that back in the ‘60s, as UP oldtimers may still recall, the Maroons were briefly called the Parrots, the emblems worn by the cheering squad. They were already known as the Maroons in the 1930s, when UP was part of the Big Three Basketball League (the other two being UST and NU). UP team captain and later Senator Ambrosio Padilla, who also played baseball, led the Philippine team in the 1936 Olympics and in the 1934 10th Far Eastern Championship Games, where we came out champions, beating Japan and China.

A bit of a spoilsport, UP President Jorge Bocobo pulled UP out of the Big Three, citing complaints that players had begun sporting a “star complex” and that the spectators had become too rowdy. Intramurals between UP Manila and UP Los Baños took over, as well as two annual “playdays”—one for boys, and one for girls. When the UAAP was founded in 1938, UP rejoined the big league. When we lost a game, we told ourselves (and others) that it was okay, because we were smarter anyway—a lame excuse we’ve fallen back on way too often down the decades.

But the evidence was there to show that our athletes had, indeed, as much brain as brawn. The unpublished history notes that “Alfonso Ybañez, varsity football captain of 1939, placed second in the board examinations for mining engineers in 1940. In that same year the spirit of sports enthusiasts was further lifted when Ambrosio Padilla joined the law faculty. And, while there might have been some excitement among the law freshmen at the news that he was going to teach the introductory course on family relations, his appointment was taken more as ‘an auspicious sign for their local basketball team.’”

Given our country’s crazy infatuation with basketball, few remember that UP actually won the general championship of the UAAP in the 1977-78 season, having bested all others at volleyball, track and field, baseball, football, and women’s basketball.

But UP’s 1986 basketball championship—powered by the likes of future PBA stars Benjie Paras and Ronnie Magsanoc—still glimmers in the memory of many Maroons of my generation, harking back to a golden age when we had just ousted a dictator (ironically also one of UP’s own) and were looking forward eagerly to a bright new future not only in sports but also in society itself. Neither of those expectations materialized—not so easily and not so quickly.

As I walked back to my car after the Adamson game, the cheers and chants of the crowd still ringing in my ears, I savored the extraordinary sense of solidarity that sports can bring to a community all too easily fractured by politics. Everyone needed the relief after a couple of weeks dominated by horribly bad news about misogyny and brawling among frat boys—a discussion that can’t and shouldn’t go away, but which also can’t be everything that defines a university.

After the 1986 victory, UP went wild, holding a big motorcade featuring three bands and capped the night with a bonfire. I’d have to wonder how we’ll top that in the event that the miracle continues and we rout our favored Katipunan neighbors. Raze the arboretum? Just to annoy the mighty Eagles, I think I’ll look for a parrot, dye it maroon, and train it to screech “Atin ‘to! Atin ‘to!”