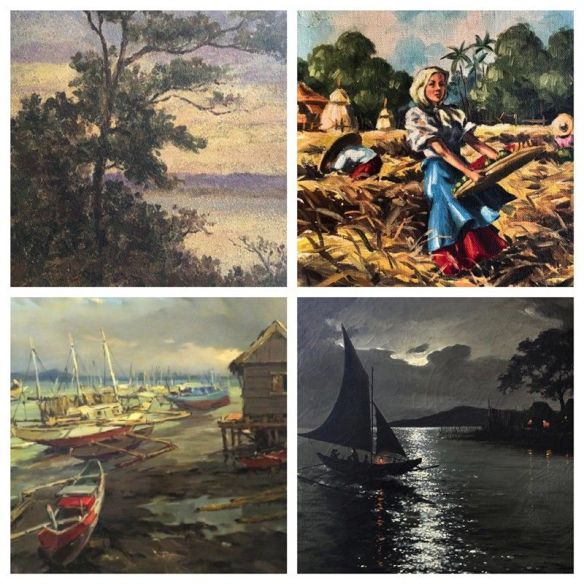 CHATTING WITH a friend about my growing collections of old books and paintings the other day, it struck me how so many of my Philippine-related items were sourced abroad, mainly from the US, Spain, and the UK. In other words, these materials left the country one way or the other ages ago, and are only now being repatriated by those like me who pick up other people’s throwaways with a gleeful passion. And beyond just wanting to acquire some new old thing, we collect with a special mission—to find, retrieve, and restore valuable or at least interesting pieces of Filipiniana, so they can be enjoyed by another generation of Filipinos.

I have friends who have the kind of checkbooks and connections that allow them to score and bring home stray Lunas and Hidalgos from some obscure Spanish estate or farmhouse. I’m glad that players like them exist to compete with the high rollers at Sotheby’s and Christie’s, but I’m clearly not in that league, so I look for far more plebeian objects: books written by Filipinos or about the Philippines, and paintings by Filipino artists.

The books are far more plentiful than the paintings, of course. At the turn of the 20th century, following the American occupation of these islands, there was great publishing interest in accounts of America’s first imperialist adventure, as well as in depictions of life in the new colony. Easily the most available antiquarian books you can find on the Philippines will have to do with that period, sporting triumphal titles such as the large two-volume Our Islands and Their People (1899), War in the Philippines and Life and Glorious Deeds of Admiral Dewey (1899), and Under MacArthur in Luzon or Last Battles in the Philippines (1901). My best acquisition in this department is the huge, elephant-folio-sized Harper’s History of the War in the Philippines (1900), which has superb illustrations, but quite frankly, as a Filipino reader, I find the propagandistic prose barely tolerable, with only my indulgent humor to carry me through passages deploring our “numerous piracies and cannibalistic feasts.”

I’ve had more fun and a deeper sense of satisfaction tracking down the foreign publications of our literary masters like Carlos Bulosan, Manuel Arguilla, Jose Garcia Villa, Nick Joaquin, and Bienvenido Santos. Like many writers of their generation, they saw publishing in America as a form of validation, and while we may argue today that we needn’t look to New York for approval, you can’t deny that surge of pride when you see those names in, say, a 1953 issue of Partisan Review alongside the best of the West.

It was, in fact, my discovery of an issue of Story magazine from the early 1930s some 30 years ago, when I was a graduate student in the American Midwest, that fired up this enthusiasm for retrieval and repatriation. That issue contained the Baguio-based Sinai Hamada’s iconic story “Tanabata’s Wife,” and I had the pleasure of presenting his family with that copy years later. I would stumble on the odd book about Dewey and his exploits at antique malls for 50 cents, and bring that home. In Edinburgh years later, I found a postcard of Filipino women, and turned that into a story titled “We Global Men.” Sometimes you just have to look very closely; scanning some antique documents being sold online, I spotted a reference in a 1578 travel book to “von der Spanier mache in den Philippinischen Insuln,”and was able to pick that up for a few euros.

Most delightful have been the paintings that I’ve come across on eBay and other auction sites—among them, a purplish treescape by the great Jorge Pineda from 1937; a patriotically themed harvest scene by P. T. Paguia from 1945; a moonlit near-monochrome by Cesar Buenaventura from 1956; and a Cavite seascape by Gabriel Custodio from 1965. Probably brought over to the US by American servicemen or by tourists looking for souvenirs, and less regarded by their next owners, these artworks turn up like flotsam on the shores of eBay (or shopgoodwill.com, where the Custodio appeared, being sold out of a Goodwill store in Spokane). And how do I know they’re not fake? The answer is, I don’t, not until I actually have and see them, but then I’m a poker player, and quite used to going all-in on a solid hunch. (The Pineda was a tricky gamble, but it’s the original frame from the period—with the seal of the well-known but long-defunct frameshop in New York—that provided the validation).

I’m not the only person on the hunt for these lost treasures, so they don’t necessarily come dirt-cheap, and shipping poses special challenges, but holding them in your hands after they’ve crossed decades and thousands of miles brings a matchless thrill. Like Filipinos themselves—the Ulysses of this age, global wanderers who inevitably come home—these pieces best belong where they are loved.

1 thought on “Penman No. 359: Retrieval and Repatriation”