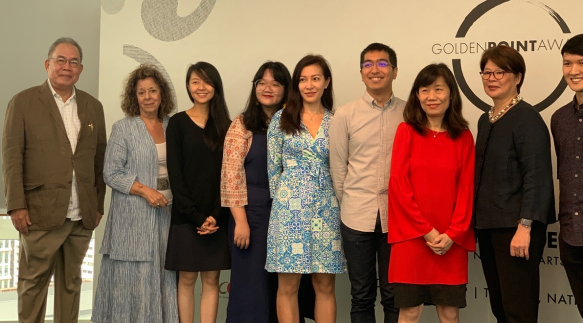 WRITING ABOUT Singaporean short fiction in the Malaysian literary journal Tenggara in 1990, the highly respected Singaporean poet and teacher Robert Yeo observed of his country’s short story writers that “They prefer the relative safety of naturalism or realism and have learned to construct the short story in terms of traditional ways of having a well-defined plot, a single moment, clear characterization, and a resolute or indeterminate end. There are no innovative tales like the surrealism of Franz Kafka, the magical realism of Marquez or the labyrinthine mazes of Borges, writers who have responded to the urgings of their personal visions of the worlds they inhabit and make….” At the same time he remained optimistic, and opined that as poets had lorded it over the previous decades, the time for fictionists had come.

Prof. Yeo’s self-criticism reminded me that, years earlier, I spotted a remark in the introduction to an anthology of Singaporean short stories that Singaporean writers had much to learn from their Filipino counterparts, who had explored the territory with both talent and audacity.

Two weeks ago, as I attended the awarding ceremonies of the Golden Point Award at the National Library of Singapore, I reflected on those comments and was happy to conclude, on my hosts’ behalf, that those days of cautious apprenticeship were over: Singaporean fiction had fully come of age. Indeed perhaps it had done that much earlier than I had noticed, but this time I was staring it in the face, in the form of the superlative pieces that won prizes in the GPA competition.

Begun by the National Arts Council in 1993—perhaps precisely to encourage the risk-taking and innovation that Robert seemed to be missing—the Golden Point Award is Singapore’s biennial version of our much older and broader Palancas, focused on discovering and encouraging new writers in Singapore’s four official languages (English, Chinese, Malay, and Tamil) in the poetry and short story categories. I was the sole international judge in the English short story, a task and privilege I shared with two distinguished Singaporean writers, Meira Chand and Balli Kaur Jaswal (who had also been a David TK Wong Fellow at Norwich, and who lived for some time in Manila).

The judging that we did online over several weeks was exciting but exhausting. Of the 1,200 entries submitted this year to the GPA in all categories, more than half went to the English short story. We plodded patiently through the digital pile, and were pleasantly surprised to find, when we finally met in Singapore for the final deliberation, that our top-six shortlists were practically the same, save for one or two pieces.

The stories submitted covered an astonishing and also very revealing range of themes and concerns that created (especially for me, as an outsider looking in) a comprehensive image of Singaporean society today. They included the following, in no particular order: migrant workers; Chinese grandparents; filial piety; competition and conformity; the generation gap; Western education, the English language (Oxbridge and British accents), and social status; arranged marriages; racial disharmony; sexual liberation; Singaporean history and nationhood; the Singaporean future; utopia and dystopia.

In my judging, I looked for the human in the Singaporean, and the Singaporean in the human. While it may not have been explicitly stated in the rules, I tried to see how the works represented both contemporary Singaporean society and also the state of writing in Singapore.

The best stories for me displayed complexity, subtlety, intimacy, and insight; they had a palpable narrative and emotional impact, and took their time to develop their tensions and arrive at their subliminally earned conclusions. I was especially taken by our second-prize winner, “Little Fears” by Lauren Ho, which drew on the tension between a Singaporean mother and her Filipino nanny, who had clearly won over her child’s affections.

The least successful ones bore many of the hallmarks of amateurs, which I see often enough in our own workshops and the Palancas: a plethora of literary quotes and allusions, hurried summaries of situations, essayistic discussions of their subjects, revelatory titles, one-dimensional characterizations, and predictable plots.

Nevertheless, the enthusiasm of all participants—the courage of writing and submitting a story for judgment—should be commended, as I could sense that the GPA was as much about encouraging effort and expression as it was about recognizing excellence.

At the awards ceremony, I also had the opportunity to meet and chat with Singaporean publisher Edmund Wee, whose Epigram (epigrambooks.sg) imprint has been championing local literature and writers. Now Edmund is looking beyond Singapore itself for the best new works by sponsoring the Epigram Books Fiction Prize, which offers the largest prize money in the Singaporean—indeed Southeast Asian—literary circuit: S$25,000 (about P933,000) plus a publishing contract; three other shortlisted finalists will get S$5,000 and a publishing contract. Starting this year, the competition was opened to ASEAN authors, and Edmund made a point of asking me to encourage more Filipinos to join. The next deadline will be in August 2020, with the winner to be announced the following January. Check out their website, folks.

With incentives like the GPA and the Epigram Prize, Prof. Yeo can rest assured that Singaporean fiction will be alive and well for many decades to come.