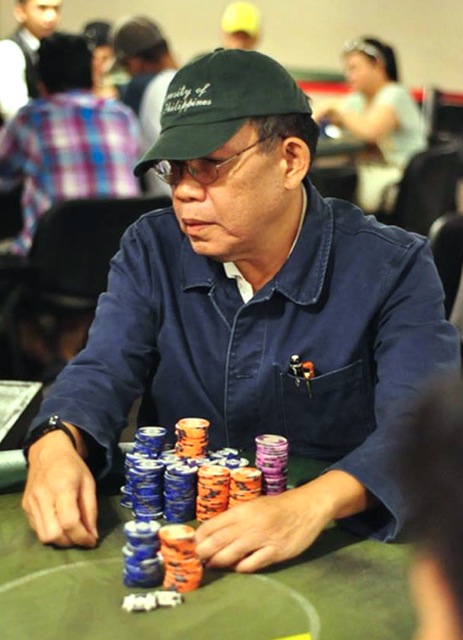 IN CASE you’re wondering where “The Pinoy McManus, Part 1” is, it came out in this corner almost two years ago, on May 28, 2012; and in case you’re wondering who or what a “McManus” is, let me reprise what that first piece was all about.

Jim McManus is a prizewinning journalist, novelist, and director of the Master of Fine Arts Program at the Art Institute of Chicago, whose fiction won him the Carl Sandburg Prize for the novel in 1996, and whose journalistic pieces—on everything from stem cell research to poker—have been published by the New York Times, Esquire, and Card Player Magazine, among many other periodicals. He’s been a Guggenheim and Rockefeller fellow as well.

In other words, in the writing game, Jim’s no slouch, and you’ll pardon me if I’ve felt a certain affinity to him, having shared the same interests and experiences—not the least a passion for poker. The fact that Jim and I are both writers and creative writing teachers is my official excuse for posting this column-piece in Arts & Culture rather than in the sports page. Now let’s get to the fun part.

Jim McManus was assigned by Harper’s to cover the 2000 World Series of Poker in Las Vegas as the backdrop for a murder investigation, but rather than watch the game from the sidelines, he decided to use his advance to buy a satellite seat (a kind of pre-tournament tournament, with a much smaller entry fee). That started an incredible run to the main event itself and, against all the odds, to the final table, where he finished in fifth place, beating out many established pros to win almost $250,000. He later chronicled that miraculous ascent to poker stardom in the book Positively Fifth Street: Murderers, Cheetahs, and Binion’s World Series of Poker, a copy of which I picked up in a second-hand bookshop some years ago.

Some years ago—about eight years now, to be more precise—was when I began playing no-limit Texas Hold ‘Em poker semi-seriously, starting with beer-soaked Friday-night home games among friends and progressing to the Pagcor-vetted Metrocard Club in Pasig’s Metrowalk, where Manila’s pokerati regularly converge. Since then, I’ve spent many a night at Metro, usually on 16-hour binges, playing low-stakes poker while pecking away on a biography or an essay on my laptop and subsisting on dry saltine crackers and hot tea and black coffee.

My excuse to indulgent Beng for these excursions is that I’m gathering material for my third novel, on which I’ve been at work for three years now, and which features a call-center agent who moonlights as a poker grinder. But heck, I’ll admit it, the game’s addicting, and while other old guys might prefer golf, my turf’s the green felt table, and the swish of the cards is music to my ears. I’ve learned a few things about the game and have even won a few small tournaments, but I’m still basically what the pros would call a fish, an amateur whose rank enthusiasm for playing will often get the better of him.

As I wrote for a magazine a couple of years ago in a piece titled “Confessions of a Fish,” I’m in it more for the rush than the money: “For fish like me, winning is less an outcome than a moment—a surge of adrenalin, a flood of endorphins—that can pass very quickly, but is a high well worth buying. It’s the high you get when you hit your flush or your inside straight on the river, busting your cocky opponent’s three aces or two-pair. Never mind that that rush is followed by a long, slow slide back into the doldrums, and that you’ll be driving home in the wee hours many thousands of pesos poorer. All a fish has to do is to remember that instant—that look of utter horror and disgust on the other guy’s face—and all the pain of losing fades away, like dirty water down a drain.”

Part 1 of my McManus article came out because I’d just then placed 20th in a big million-peso tournament at Metro, my best-ever finish at that point. Jim McManus actually read my Star column online and congratulated me for it; we exchanged messages and pleasantries, and I promised to take him up on his invitation to have coffee or a beer with him in Kenilworth, Illinois one of these days and have my copies of his books signed (I also have his definitive history of poker, Cowboys Full).

Now, Jim, if you’re still out there, here’s an update from the fanboy and wannabe: last week, I did myself one better, and made the final table of another major tournament, the P1-million Metro Summer Event. A million pesos is small beans by Las Vegas standards, but the first prize could have wiped out my credit-card bills and bought me a Montblanc or two, so I was all worked up for the four-day marathon.

Like Jim, I entered the MSE through a pre-tourney satellite, winning a ticket to the big game. We started out with 15,000 in chips, and at one point on Day 1—among over 400 other players in the pool—my stack went down to 7K. On Day 2 and with the pool down to a hundred, I hit a lucky streak and nursed my 40K stack to almost 380K; on Day 3, that ballooned to over 1.2 million (these are just chips, folks, not real money, so don’t get too excited). On Day 4, down to the final table of ten players, I went in as second chip-leader, but also as the oldest guy and the biggest fish in the pool of sharks.

The technical details that follow will fascinate only the poker cognoscenti: I got that far in the tournament because of some of the most incredible, heart-stopping suckouts or last-card, last-second turnarounds you ever saw. At one point, my opponent drew a flush on the flop against my Q-10, but I hit trips on the turn and a full house on the river. The wildest hand of the tournament had me going all-in against the chip leader with a pair of 9s; he called, and tabled a pair of 10s: I was, 90 percent, a dead duck right at the start. The first three cards or the “flop” rolled out, none of them a 9 or a 10, but with two clubs; the fourth or turn card was the 6 of clubs. My opponent held the 10 of clubs, so he wasn’t just leading from the get-go but also had a backdoor flush draw.

Only one card in the whole deck remained that could beat him, the 9 of diamonds; if any other card showed up, I’d be homebound (even if the fifth and last or “river” card was the 9 of clubs, he would still hit his flush). At this point, I got up and shouldered my man-bag (loaded with crackers, a cellphone power bank, and Splenda sweetener); I needed the Splenda, as I could smell and taste the bitterness of certain defeat. Then the dealer drew and turned over the river card—hallelujah, the 9 of diamonds, the absolute, 2-percent one-outer. My opponent collapsed against the wall as I heard choirs of angels singing “Ode to Joy.”

On the final day, after a good night’s sleep, I got up at 6, and did a 10-kilometer walk around the UP campus, running the “Chariots of Fire” theme in my head. This was my day of days; I showered, did my students’ grades and turned in my grade sheets, worked on one of the biographies in the pipeline, got a foot massage, then put on my “University of the Philippines” baseball cap and blue jacket—my battle gear—and went to the final table.

I held on that night, scribbling messages to myself over the breaks on a notepad with my faithful Agatha Christie, reminders like “Keep your head!” and “Patience, endurance, opportunity!” (It was probably the doodling more than the messaging that relaxed me.) With uncharacteristic smartness, I played it safe, tossing away nine out of every ten hands, preserving my stack while I let the others duke it out. Eventually I finished in second place, bowing to a friend and previous champion, a genial and exemplarily cautious player, TV and film director Tofie Runas.

The next day I brought Beng with me to Metro to claim my prize, to ensure that the money would go to good causes (I might treat myself to a pen or two, as a souvenir of the experience). “Heck, this beats the Palancas,” I told myself, remembering my first Palanca short-story win nearly 30 years ago, also a second-place finish. I could see Jim McManus grinning in Kenilworth, Illinois. He’d addressed me in his messages as “brother,” so here’s to you, brother Jim, and to all of us 60-somethings chasing thrills and spills on the green felt table.