ONE OF the most delightful gifts that Beng and I got a couple of weeks ago for my 60th birthday and our 40th wedding anniversary was a bag of oven-fresh bread, accompanied by a handwritten letter. I found the bread so literally warm, and the letter and its contents so unique, that I secured the permission of the sender to reproduce it for this column. It’s a testament to the persistence of good things and good intentions—and, of course, of good people in a world too often and too crassly ruled by the bottom line.

In part, the letter said: “I’m sending traditional pan de suelo breads which are pugon-baked on the suelo or floor of the 75-year-old wood-fired oven of Kamuning Bakery. The crust is crunchier and it should be reheated with a toaster and not with a microwave oven. Nick Joaquin, NVM Gonzalez, and others of past generations have written about this pan de suelo bread of the Philippines.

“I bought Kamuning Bakery just before Christmas, and have kept the old owners as minority shareholders so they can continue the traditions and tastes of this bakery. I also bought the land and old building. I invested here because I believe in the old owners, the pugon bakers who are artists and the staff with their unique commitment to their craft and vocation. I want to support this independent pugon bakery with their traditional no-preservative and no-additive Filipino breads, despite the huge challenges of this era of big multinationals, bakery chains and supermarkets and their mass-produced factory or industrial breads.”

The sender of the bread and the letter was none other than my fellow STAR columnist Wilson Lee Flores, business chronicler extraordinaire and confidant of Filipino taipans. Wilson may move in those lofty circles, but his feet remain solidly on the ground—in this case, Kamuning and the oven floor on which pan de suelo is baked, unlike the more familiar pan de sal, which comes to life on metal trays. (Incidentally, many young Filipinos probably don’t know that kamuning—like the kamias that lends its name to the same street across EDSA—is a plant, Murraya paniculata, with tiny and fragrant white flowers.)

The Kamuning district is one of Quezon City’s oldest—in fact, the bakery was put up in its present location in 1939, when the city itself was established—and while modernization has inexorably overtaken many other parts of the city, Kamuning has managed to retain some of its 1940s charm and character, an effect assisted by the proliferation of antique and resale shops and even a vintage-car restoration outfit in the neighborhood.

You can’t get more original than Kamuning Bakery, which has stayed pretty much as it was when it opened. It’s been kept alive by the seventy-ish Ted Javier and his sister Beth Javier Africa, the son and daughter of the late Atty. Leticia “Letty” Bonifacio Javier, who co-founded the bakery with her husband Lt. Marcelo Javier.  Wilson tells the rest of the story: “It was President Quezon’s close ally Alejandro Roces, Sr. who suggested to the Bonifacio family of Los Baños Bakery that they open the new city’s first bakery. So they sent their newly-married daughter Atty. Leticia Bonifacio Javier and her husband Marcelo, who founded Kamuning Bakery.” Sadly, however, Marcelo, his father-in-law Major Miguel Bonifacio, and another of Ted’s uncles were killed by the Japanese during the Second World War.

So it fell to Letty to keep the bakery going with the help, in time, of her three young children, producing pan de suelo, described by Wilson as the “fist-sized version of pan de sal with a hard and crisp crust,” and of which Nick Joaquin wrote “colegialas got their gums toughened on their segundo almuerzo in the morning and, with hot chocolate, their meriendas in the afternoon.”

Indeed it was all the crunchy goodness that Wilson and Mang Nick promised, but don’t take it just from me. Just last month, a blogger named Tummy Traveler reported, after receiving her own gift bag of the bread, that “The pan de suelo was toasted just right. Just the right amount of crunch on the outside yet the bread still had that delicious moistness and softness on the inside. It had a faint hint of sweetness that went well with the salty corned beef together with my freshly brewed coffee and sausage.”

If all this sounds like a shameless plug, it is. Let’s help Wilson Lee Flores help keep a family and Pinoy tradition alive. I’m already planning a sortie there this weekend with Beng to stock up on the good stuff, and to visit an antique shop or two while we’re in the area. Kamuning Bakery can be found on 43 Judge Jimenez corner K-1st Street, one street inward on the left somewhere between EDSA and Tomas Morato, telephone 929-2216. They also have a Facebook page at https://www.facebook.com/kamuningbakery1939. 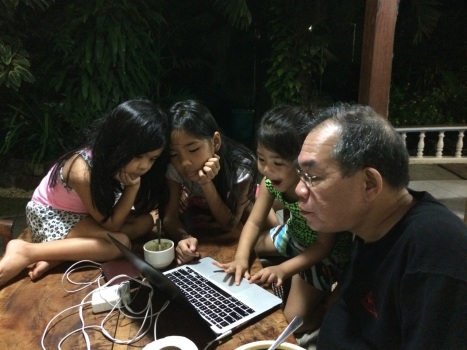 WHILE I’M writing about bread and giving thanks to friends, let me thank another fantastic baker, Theresa Juguan, who with her family and husband Herwig hosted me and Beng in their home in Puerto Princesa over the post-Christmas break. A few months earlier, we had been first-time guests at their seaside villa just outside Puerto, and we struck up such a rapport that Theresa and Beng now call each other “sister.” I’ve also urged Theresa to write her cookbook-cum-autobiography, with her life-story being as remarkable as her cooking and baking.

What I most enjoyed about this second visit, though, was playing “Tito Butch” to Theresa’s granddaughters, particularly five-year-old Zanique and her elder sister Zitroenne and cousin Zantelle, who amazed me with their precociousness. Since the in-house wifi was down, my MacBook Air—hooked up to cellular Internet—became the center of the girls’ attention. “Tito Butch,” they cried, “we want to play! Can we use your computer?” “Sure,” I said, “where do you want to go?” And here’s what floored me: these girls knew what a URL was and could recite it by heart: “W-W-W-dot-Y-8-dot-com!”

So I keyed in the address and sure enough, a website for online games popped up. “Go to Games for Girls!” shrieked the kids, and so we did, and they quickly zoomed in on “Cooking Games,” which featured the step-by-step cooking and baking of everything from spicy corn and shrimp salad to tiramisu. “You cook this,” said Zanique, “and I’ll cook this!” And so they did, in all earnestness, arguing over the sequencing and the measuring of the ingredients. (Beng and I had watched Zanique stick by her grandma in the kitchen, helping with the making of fresh lumpia and admonishing a tita who was going about it the wrong way.)

Thus are great cooks and bakers and great traditions made.