LAST WEEK’S piece on “Fairlyand”—the mountain of Calatong in my home province of Romblon—elicited quite a bit of interest among my readers, and I was very pleased with the response until my mother, who grew up around the place, called my attention to a potentially lethal mistake I’d made in my retelling of my cousins’ and aunts’ stories about that enchanted kingdom. (I’m thinking that “lethal” might depend on whether you believe in spirits or not, and I don’t, but talk like this always reminds me of a conversation I had with a sharp old nun whom I met in one of my Italian sojourns, who said: “The question isn’t “Do you believe in God?’ but rather ‘Does God believe in you?’”)

The mistake I’d apparently made was in saying that eating quinta, or black mountain rice, was an antidote to fairy spells. “It actually works the other way around,” my mother told me in our little garden in Diliman. “They’ll offer you black rice, and if you eat even a handful of it, they’ll take you to Calatong and you’ll never be seen again.” So folks, be so advised; beware of strangers offering black rice, although it’s not very likely you’ll be seeing any soon. The last time I saw truly black rice was in an American grocery store in the Midwest, where it was being sold as Indian wild rice, and cost considerably more than any other exotic variety on the shelf. But then maybe that preciousness implies more than a smidgen of magic. If black rice banishes people to oblivion, I’d like to buy a sack of it, whatever the cost, to feed to certain politicians before 2016.

Which returns us to the more prosaic realities of modern-day Romblon. Not too many people, even Filipinos, know about Romblon, which if they ever board a ship for Panay they’re likely to pass unseen in the night, after Mindoro. It’s composed of three main islands—Tablas, Sibuyan, and Romblon—and was a sub-province of Capiz during Spanish times. As Philippine provinces go, it’s a pretty small one, with less than 300,000 people (excluding encantos), and my favorite quote about it comes from Jose Rizal via NVM Gonzalez (who was born in Romblon in 1915), who passed it on his way back to Manila from exile in Dapitan, remarking that it was “muy hermosa pero muy triste.”

Much of the hermosa part remains. On this first long visit home in two decades, we took an SUV around Tablas, a day trip I’d never taken before, and I was awestruck by how lovely the place was, fringed by one emerald cove after another. I lost no time in telling my friends to consider Romblon as a vacation alternative to Batanes, Palawan, and Boracay.

Indeed, Boracay’s a short hop away by motorized banca, and being on the other side of the same oceanic basin, Romblon is also blessed with many white beaches, most of them yet undiscovered. (All these islands and their people belong to one ecosystem, as it were, their languages familiar to one another, though subtly different; my paternal grandfather must have come from the Dalisays of Ibajay, Aklan, where a playwright named Marianito Dalisay Calizo wrote moro-moros in the mid-1700s.)

Some of these natural getaways have been found out, and the developers and entrepreneurs have begun streaming in, and foreigners with Filipino wives have been buying up prime beachfront property for a fraction of Boracay prices. (The best fish catch in Romblon still goes to Boracay, where it can fetch two to three times as much.) 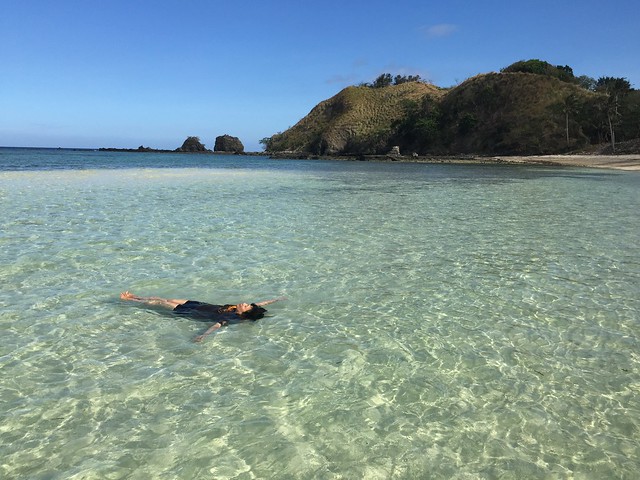 One happy discovery we made was just a 15-minute ride from my hometown of Alcantara: Aglicay Beach, owned and managed by an affable balikbayan doctor, which offers a white-sand beach, great snorkeling, and spectacular hilltop views, all within a resort with the usual amenities, including conference facilities and wi-fi. You’ll have to pay the admission fee, though—all of 30 pesos. (To know more, check out www.aglicaybeachresort.com.)

The triste part, I don’t know. There’s certainly enough to be sad about, as much of Romblon remains painfully poor. On the other hand, the tougher things get, the harder many Romblomanons work, with their brains if not with their hands. I was puzzled by the knot of schoolchildren who gathered in front of our beachside house at dawn every morning—they carried their shoes rather than wore them—until I realized that they had walked over barefoot from a nearby island at low tide. I would later learn that one child, barely nine, had drowned this way when the tide came back in too quickly. But there was no fear in these survivors’ faces, only an insistent resolve that now and then would fracture into laughter.

We were roused one morning by the thump-thump-thump of techno music in the plaza. “They’re just testing the sound system,” said our host. “It’ll be fiesta soon.” They called the uncanny practice of waking every one up pag-di-diana, and I thought that it might have had something to do with Paul Anka’s karaoke staple.

A few other discoveries I learned on this trip were rather more personal. I had always wondered why I had spent such a long summer there as a ten-year-old in 1964—an experience I recounted in my first novel, Killing Time in a Warm Place—and I learned that it was because we were then so hard up in Manila that we children had to be farmed out, as it were, to save some money. My aunts recalled me as a smart but prissy boy who wore long-sleeved shirts in a seaside village and who would recite long poems in English at the drop of a hat.

We also solved the mystery of why my grandmother Pinang left my Lolo Tolio in the mid-1920s shortly after marrying him and giving birth to my father Jose. It had been something of a forced marriage to begin with, and Pinang was a headstrong woman, but the story we heard was that she hated being made to serve hot chocolate when some constables came visiting one day, and took that as the last straw and left. (They would live a kilometer apart for the next 60 years, and would inevitably run into each other in town but never speak.) Now it emerged that Tolio was having a saucy little affair—an explanation that makes Lola Pinang much less petulant than the chocolate story would make her out to be.

Whether sad or funny, it felt good to hear and to understand these stories again in Romblomanon without having to defer to my wife’s more widely spoken Hiligaynon, to say udi instead of diri, basi instead of ngaa; it’s still palangga in both languages. I felt at home.