“ON A CLEAR day, you can see Malaysia,” they said. And we did, from the waters off Balabac, on the southernmost tip of Palawan. At that point, approaching the lighthouse at Cape Melville, our guide pointed to a gray mass on the far horizon across the strait, and said, “That’s part of Sabah.”

We had arrived in Balabac the day before, after a six-hour ride by van from downtown Puerto Princesa to the station at Rio Tuba, and then another three- to four-hour trip by motorized boat to Balabac’s poblacion. It was an unlikely adventure for Beng and me, being the only seniors in our party that included our favorite traveling companions—my niece Susie, her husband Toto, my cousin Edith, and our good friends the Puerto-based expat innkeeper Herwig and his wife the chef and baker Theresa. We’ve been to Palawan pretty often—staying when possible with Herwig and Theresa, who run the very aptly named Amazing Villa in Aborlan just outside of Puerto—but had never been down to Balabac. An invitation from a Balabac native, Theresa’s lawyer Atty. Regidor Tulale, proved compelling enough to make us pack our bags and head out to our southern frontier.

I’ve always wondered why our tourists—both foreign and local—seem so fixated on Boracay when Palawan offers beaches just as spectacular, in contexts far more interesting than D’Mall, without the crush of tricycles and tourist vans depositing hordes on fellow visitors on the same crowded stretch of white sand. Puerto Princesa alone and the islands on Honda Bay offer enough pleasures and treasures for the urban straggler, but, as we would discover, the farther out you go, the closer you get to tropical nirvana.

There are buses that ply the 240-kilometer route from Puerto to Rio Tuba, the nickel-mining barangay in the town of Bataraza past Brooke’s Point, but it’s a trip best taken in an air-conditioned van, given the summer heat and the need—especially for the elderly—to stop at a gas station now and then for some private relief. It’s a long but pretty ride, not unlike the run up to Baguio from Manila in the distance and scenery, on a road flanked by views of cloud-topped mountains, and golden showers blooming riotously.

Rio Tuba itself seems as rough as mining towns tend to be, an impression little helped by a recent fire that gutted the area around the pier, the transit point for boats venturing on to Balabac. Nevertheless, there was a plucky, pick-me-up cheerfulness to the locals (the fire, they said, had started accidentally in one of the big stores in the neighborhood, and everyone was busy rebuilding what they had lost), and the pier at the end of a huddle of houses on the water bustled with traffic.

The boats they use in these waters are large motorized outriggers that can easily take 30 passengers, seated four or five to a row on wooden planks; they can theoretically reach Sabah in a few hours, but, we were told, these boats were prohibited from docking in Malaysian ports because their breadth took up too much berthing space; the sleeker and faster kumpit would be the vessel of choice for that voyage. There was clearly a lot of trade going on between Palawan and Sabah, judging from the stockpiles of Malaysian goods and groceries in Rio Tuba, and one had to wonder how much of that went through customs and other legal encumbrances, but we opted, I think wisely, not to ask too many questions.

The three-hour ride to Balabac itself, with one or two stopovers on the way, was smooth and pleasant. “Balabac” is the central island and town in the area, but it also broadly refers to a cluster of more than 30 islands, and you’re never too far from one of these. (“That’s owned by Senator XXX and by former President YYY,” our guide would tell us as we passed by one paradaisical isle after another.) The glassine sea challenged the poet to come up with all variables of blue and green, and with some luck—not that day—dolphins were known to swim alongside the boats.

Balabac’s town proper was small and compact, with one main street along which shops selling clothes and groceries huddled; the largest and most impressive building in town, aside from the municipio, was the Coast Guard quarters, a sign of how important patrolling these waters was. The local tribe, the Molbog, are said to have migrated from North Borneo and have their own dialect, but what surprised me throughout this visit was how widely Tagalog (or, more accurately in a national context, Filipino) was spoken, even by the locals among themselves.

You won’t have any problems choosing a place to stay, because there’s only one public lodging house in Balabac, above and adjacent to the Sing and Swing Karaoke Bar. Maybe not the best prescription for a good night’s sleep, as some of my companions would discover, but for P300 per room a night with shared toilets and baths (P100 per extra person), you can’t complain.

What to do in Balabac, aside from shopping for Malaysian chocolates and biscuits? Why, island-hopping, of course, and dining on the plentiful fish, which we did the next day, taking a boat out to Candaraman Island and dipping into the cool clear water beside the small seaweed farms cultivated by the people for their livelihood. Unfortunately, the low tide prevented us from docking and marching up to the century-old lighthouse on Cape Melville, but we did get that glimpse of Malaysia along the way, in a day that culminated in one of the most stunning sunsets I’d ever seen.

As the darkness deepened around us, we sat quietly along the dock, watching the southern summer sky. Above us blazed Venus, a solitary sparkle; down to its left, as if a genie had conjured it up with a wave of his hand, emerged a crescent moon. It was a long way from home, but a sight well worth the journey. 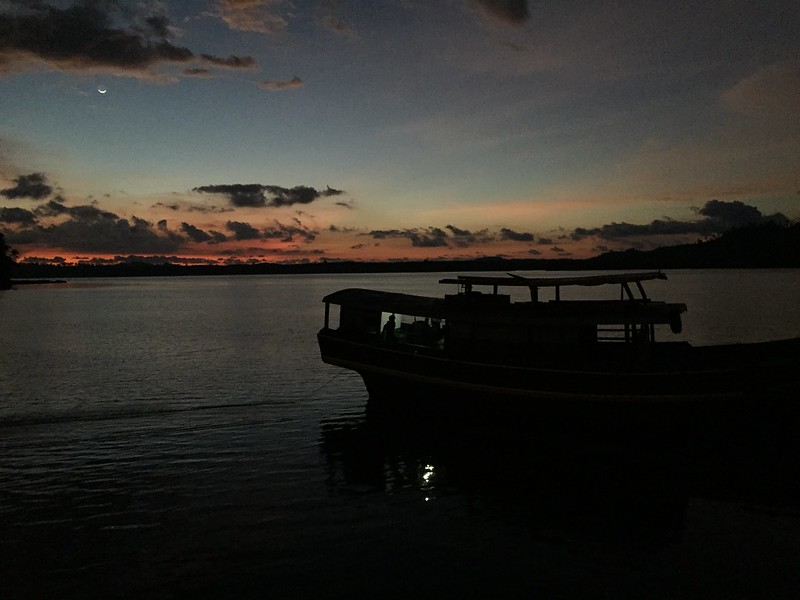