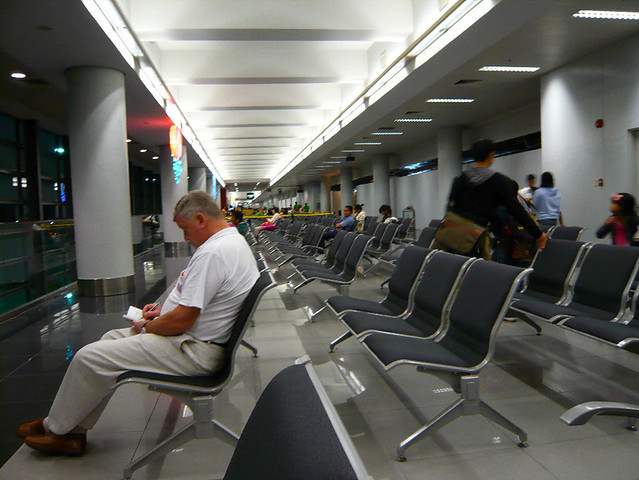 I’M NOT as big a TV fan as I used to be—I haven’t seen a single episode of Game of Thrones—but I can’t get enough of certain types of reality shows. I’ve been strangely attracted to Project Runway, and despite being a culinary philistine who hates cheese, I’m a sucker for food shows. I don’t care much for Survivor-type formats, believing that living in Manila beats sharing an island with snakes and monkeys anytime. I reserve my highest praise and deepest fascination for junk-o-ramas like American Pickers and Pawn Stars, being the kind of ukay-ukay addict who flew to Barcelona not for Gaudi’s Sagrada Familia but for the Encants flea market.

But there’s another kind of show I’m fixated on, in the same odd way that I hate even the prospect of surgery—I shrink like a schoolboy at the sight of a needle—but can be engrossed by medical documentaries, where other people get cut up. It’s the airport immigration and customs show, like Border Security Australia and Border Security Canada, where incoming passengers go through a gauntlet of questions and searches meant to find out if they’re drug dealers or food smugglers or people pretending to be tourists but are either (a) jobseekers; (b) international terrorists; or (c) fugitives from justice in disguise.

I cringe whenever a passenger—usually an Asian, sometimes a Pinoy—is loudly asked a dozen times, in clear, slow English, “Are you carrying any food?” The passenger looks stricken and bewildered, but ultimately decides to feign ignorance and/or linguistic incompetence and shakes his or her head, immediately upon which the customs officer opens the passenger’s bags to reveal enough meats, cooked dishes, condiments, and desserts for a wedding feast. The officer points to the customs form in which the passenger has boldly checked “No,” which occasions even more vigorous head-shaking, or the groan of discovery, or the wheezy laughter of surrender. The culprit is then fined, or given a stern warning, and the illegal edibles are confiscated, presumably for incineration (in this country, I think we know where they’ll end up—it’s a bigger crime to waste good food!).

As a frequent traveler myself to places out West, I shouldn’t rejoice at these embarrassing encounters between cat and mouse, but I’d have to shamefully admit that I do, which is why I keep watching these shows, for more of the same thing. I suppose it’s what the Germans call schadenfreude—the strange but delectable pleasure we get from the misfortunes of others, if only because it happens to them and not to us. Or at least that’s what we’d like to think.

I remember how, just a couple of years ago and after having made dozens of trips across the Pacific and gone through countless immigration lines, I foolishly “forgot” that I’d bought a few packets of chicharon—the deadlier bituka version, mind you, not the more innocent-looking rinds—at a planeside shop in NAIA, thinking that I would munch on them on the flight to San Francisco in the long stretch between meals. I must’ve fallen asleep instead, because they were still in my carry-on bag when Beng and I arrived in SFO, and had the misfortune of being singled out for random inspection (I think they read the vibes I must have subliminally emanated: “This guy is carrying chicharon. Arrest him.”) I speeded through the immigration process like the veteran I’d thought I was, chatting up the border agent in my best Midwestern-accented English, only to find myself in a special customs queue for secondary inspection. OK, I thought with a minor shrug of annoyance, no problem, let’s get this over and done with, shall we?

The immigration gods didn’t desert me completely, however, assigning me to a customs agent who was obviously Fil-Am, and who just as obviously knew how to deal with sneaky kababayans like me. “Magandang umaga po,” she said sweetly in Filipino as she took hold of my bag. “May pagkain po ba kayong dala ngayon—bagoong, chicharon, mangga?” I was all set to harrumph and put on my foulest professorial airs when I suddenly remembered—at her mention of the usual suspects—the packets of chicharon that I’d stuffed into the side pocket of my bag.

For a millisecond I toyed with gambling on her missing them—the chicharon bulaklak seemed even more delicious, being forbidden, and now I was never going to get a taste of it—but decided to come clean. Decades earlier (you see how these things have histories), an immigration beagle had sniffed out a stash of dubious comestibles in Beng’s luggage, meant for lonesome me in Milwaukee; now I was sure that they had 21st-century detectors and X-ray profiles of bagoong, chicharon, etc. in some secret room behind a nearby wall.

“Ay, may chicharon bulaklak pala ako!” I exclaimed, throwing my hands up. “I meant to eat it on the plane, but forgot,” I added, grinning sheepishly. The agent reached in, felt for, and fished out the offending packets, and tossed them into a trash bin that seemed about to overflow with other people’s confiscated contraband. “I’m glad you told me, sir,” the Fil-Am agent said, with the barest hint of regret. “I would have fined you $300 if you didn’t!” I shuddered at the thought of having to fork over $300—the price of a fancy fountain pen—for three packets of pork innards that I didn’t even get a bite of. There, I thought, but for the grace of a kind Pinay go I.

So whenever I watch those poor, guilty souls trudging toward the immigration and customs agents on the TV shows, I silently scream at them, “Confess! Reveal the sausages and the century eggs! Resistance is futile!” Of course they never do, and I feel rewarded with my minute of smug satisfaction at having narrowly escaped the clutches of Western justice. (And it’s just them, right? Nobody but nobody ever asks incoming Americans, Canadians, or Australians, “Excuse me, sir, but do you have hotdogs, burgers, or French fries in your luggage?” Perhaps our immigration people should be better trained.)

SPEAKING OF overseas Pinoys, a fraternity brother in Toronto, Fred Postrado, emailed me to ask for some help in reaching out to his batchmates from the Manila High School Class of 1973, which is planning to hold a reunion during the last week of February 2016. Those interested may contact organizers Zen Alcantara Cabaluna at 0908-8849190 and goldland_zen@yahoo.com, Mario Bulatao at 0917-5215739 and supermcb55@yahoo.com or Virgie Nudalo Calimag at 0932-8615484 and vncalimag@yahoo.com.