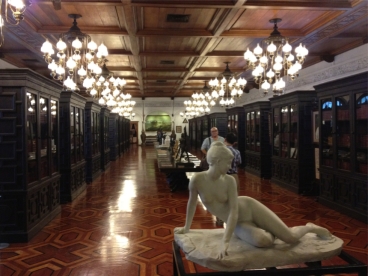 I HAD an unusual encounter with history last week, by way of two sorties to two different exhibits that turned out to have a bit more to do with each other than I might’ve initially thought.

The first trip was something I’d been meaning to do for years but just never came around to doing—a visit to the Presidential Museum and Library at Malacañan Palace. (Our tour guide took pains to point out that “Malacañan” referred specifically to the presidential seat of power and the more popular “Malacañang” to the entire place itself; I think we’ll go with Malacañang for the rest of this piece.)

It’s one of those sad ironies that we footloose Filipinos can make elaborate and expensive plans to visit the White House and Buckingham Palace without ever setting foot on our own presidential abode. It could be that for far too long—particularly all those years of martial law—Malacañang didn’t lend itself to friendly visitations by ordinary citizens. That, plus the fact that we Pinoys have never had much of a sense of history, beyond routine celebrations of Independence Day and tired if not tiresome commemorations of Edsa 1. We’ve been schooled to think of history as high drama, as a calendar of big events, forgetting that those events were forged in offices, classrooms, factories, and the shade of mango trees.

Malacañang is, of course, the perfect theater for high drama—one of the balconies in the museum was the setting for that famous picture of Ferdinand Marcos and his family vowing defiantly to stay and to fight on, shortly before decamping to America in February 1986—but it was also, and remains, home and office to a long succession of men and women who led the country, people doing nothing more earth-shattering on most days than signing letters of condolences and felicitations and proclamations declaring this or that period to be National Fire Prevention Week.

As a museum rat, I’ve always been fascinated by presidential and royal regalia, and by the mementoes left behind by the high and mighty—not to be awed by them, but to appreciate their humanity behind the pomp and the poses. George Washington’s signature blue coat is on display at the Smithsonian, but so are his dentures, which must have hurt far worse than mine, and I don’t even have to worry about putting a country together; the mock pockets on Jose Rizal’s jacket in Dapitan betray a sharp fashion sense even in exile (and the smallness of his body size—a surprise to many Filipinos expecting a titan of a hero—merely accentuates his real stature).

Last week, thanks to the invitation of Ronnie Geron—an undersecretary in the palace and an avid member of Fountain Pen Network-Philippines—our group of over 30 fountain-pen enthusiasts got to visit and tour the Presidential Museum and Library. Since fountain pens themselves are something of an anachronism, stepping back into presidential history was a treat for all of us, and we can’t be blamed for feeling that the highlight of the tour was staring at Emilio Aguinaldo’s pen, or what remained of it—a piece we quickly identified as being very likely a Waterman 52 in mottled red hard rubber (a sorry shell of a pen, in exchange for which I offered to provide a near-mint example from my collection—but no one seemed to be too interested).

There were no other pens to be found that day in the museum and library, but there were roomfuls of other memorabilia, from the time of the Spanish and American governors-general to the prewar, postwar, and recent presidents: photographs, paintings, clothes, books, furniture, documents, and campaign materials. Every president had either a room or a corner devoted to materials from his or her presidency, and our very knowledgeable guide—a young man named Louie—walked us through the history of every room, mindful that the building itself was historic, quite apart from its residents.

The museum and library are located in what is now known as Kalayaan Hall, a 1921 structure used by the Americans as their Executive Building; the Marcoses called it Maharlika Hall, but Cory Aquino gave it its present name. Aside from the Main Hall and Library (or the Gallery of Presidents), the building also contains the Old Waiting Room Gallery, with materials from the Spanish era; the Old Executive Secretary’s Office, with rare Rizaliana; the Old Governor-General’s Office, the Osmeña Cabinet Room, the West and East Staircases, the Quezon Executive Office, the Quirino Council of State Room, the Roxas Cabinet Room, and the Northeast and Southeast Galleries. Plan on spending at least an hour to see and imbibe everything.

What most Filipinos (including many of us) don’t know is that tours of the Presidential Museum and Library are available for a minimal fee to individuals or groups who make the necessary arrangements beforehand. (Call 784-4286 local 4945 or email pml@malacanang.gov.ph for details.) The entrance is through Gate 6, and parking can be had at the Freedom Park just outside the gates.

Another exhibit that I made a point of looking into was one at the Cultural Center of the Philippines Main Gallery, titled “ReCollection 1081: Clear and Present Danger (Visual Dissent on Martial Rule),” co-curated by Marika Constantino and Ruel Caasi, and staged by the CCP in cooperation with the Liongoren Gallery. ReCollection 1081 brings together a selection of artworks produced by Filipino artists during and after martial law, as well as publications produced by both the underground and alternative press.

Those who lived through martial law can’t possibly miss the irony of the exhibition venue—much hated and derided in Imelda Marcos’ time as the domain of the elite, but long since reclaimed by more ordinary folk.

This show was already written about by Constantino herself a few days ago here in the Star, so I’ll just have a few points to add—chiefly, that the artist’s protest against oppression, injustice, and exploitation both preceded and continued after martial law (see Jaime de Guzman’s Sabbath of the Witches, 1970, and Nunelucio Alvarado’s Tunok sa Dahon, 1986).

It was martial law, of course, that provoked both the most explicit and subtlest forms of protest, demanding both courage and wit of the artist, and this range of responses is on full display in the exhibit. Assembling these works was already a feat in itself, considering how many more such works (and their creators) have been lost in the crossfire. Their survival into another century and their installation in the cultural bastion of the dictatorship is sweet poetic justice.