AS IF two trips up to Baguio in early April weren’t enough, I went up a third time later this month. But while my previous sorties had to do with literature—high-minded work, you might say—this third one was purely for fun… and, well, okay, some education of the esoteric kind. That education, I hope, properly qualifies this piece for the Arts & Culture section, particularly as it has to do with my favorite subject of discussion, fountain pens—that’s right, those inky instruments of insistent individuality.

The members of our five-year-old pen club, the Fountain Pen Network-Philippines or FPN-P, had long planned to hold a vintage-pen-repair workshop in Baguio, and this month it finally happened. Why Baguio? Because that’s where our host—the Bali-based Fil-Am pest exterminator (seriously, that’s what he does for a living) Butch Palma—keeps house when he’s in the Philippines, with a veritable pen repair shop and laboratory in the basement. After some hemming and hawing, seven diehards signed up for the workshop: the onetime mechanic, nurse, and now banker JP Reinoso, our local “nibmeister” or master of nib repair and modification; the retired pharmaceuticals executive Chito Limson; the lawyer and DepEd Undersecretary Albert Muyot; the UP engineering major Jonathan Isip, our resident geek and IT specialist; the UP Special Ed grad student Cesar Salazar, who’s had as rich and varied a business background as any; and the two Butches, Dalisay and Palma.

In FPN-P, my tocayo and I are known as the vintage-pen guys, since our collections (about 200 pens for me, and double that for The Other Butch, or TOB as he’s affectionately called in the group) lean heavily toward prewar pens. I have about 60 Parker Vacumatics—fabulous pens and eye candy, with colorful shimmering stripes—and have learned to repair them myself; TOB also likes Vacs, Sheaffers, and gold pens, and is far more advanced and experienced at repair than the rest of us. But what’s even more impressive about TOB is his armory of pen-repair tools, including a mean-looking heat gun and Dremel drill, maintained and arranged as carefully as a conscientious dentist might treat his picks and forceps. (The comparison isn’t as fanciful as it may seem; the dental pick is one of a pen repairman’s most constant friends.)

Fountain-pen repair is a lot like vintage-car restoration. You want the final product to come out all spiffy and shiny, but there’s a lot of work to do—often insanely complicated work—under the hood. You don’t need just the skills, which no one really teaches; you also need the parts, supplies, and tools, which can be as arcane as they come, such as an inner-cap puller for Parker pens, sac protectors for Sheaffer Touchdowns, lever boxes for hard-rubber Watermans, and rubber sacs and diaphragms of many sizes. These aren’t things you can pick up at True Value; they have to be sourced online, and then painstakingly practiced with, inevitably at the cost of a priceless pen or two.

And when a repair newbie’s eagerness outstrips his skills or his patience, disaster happens. Thirty years ago, as I was just getting hooked on pens, I found a rare, mustard-colored Parker 51 Vacumatic in a thrift shop in Michigan for 25 cents—not bad for a pen worth at least 1,000 times more—and promptly cracked the barrel with a twist of the pliers. (Memo to self: heat the barrel with a hair dryer before attempting disassembly, to let the plastic expand.) 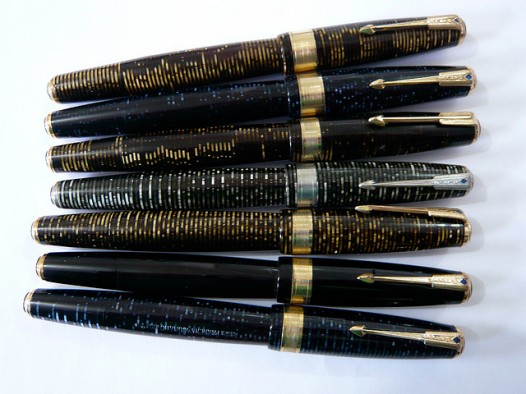 You would’ve thought that—dozens of fixed Vacumatics later—I would be a master at this, and maybe I thought so, too. But at TOB’s workshop, I made another dumb newbie mistake: using a tool I didn’t know without reading or following instructions. The tool in point was TOB’s heat gun, which sends out a blast of hot air like some kind of light saber. I was kidding my tocayo about his having a heat gun instead of a hair dryer because—well, if you see his shiny, saintly pate, you’ll understand why—and then I turned the heat gun on a 1940 Vacumatic that I was going to use to demonstrate my graduate-level skills to the nervous newbies. But, alas, before I could say “This is how…”, the heat gun vaporized a chunk of the pen’s barrel, and there in a smoky wisp went another of George S. Parker’s creations, having survived for over 70 years before some dumb monkey with a PhD zapped it to pen heaven.

Happily the rest of our weekend’s forays into the art of reviving dead writing instruments went much less dramatically, with positive results. Taking a break from headaches in primary education, Usec Albert (one of three Usecs in FPN-P, big fountain pens being a lawyer’s weapons of choice) learned how to replace a “jewel” or an ornament in the butt of a ca. 1960s Parker 61, Chito repaired the 1940s Vac of San Beda Prof. Pidoy Velez (threatening to bill him P8,000 per hour for the three-hour service), JP showed me how to breathe life back into a 1930s Touchdown, and TOB put together a pretty 1938-ish blue Esterbrook using a cap and barrel rummaged from my parts bin (and I found a black Vac barrel from his, to replace the one I ruined), so in the end, everything worked out just fine for the pen boys. (And just to get this straight, at least a third of FPN-P’s more than 300 registered members are female, some of them—the amazingly talented Ms. Leigh Reyes instantly comes to mind—blessed not only with formidable pen collections but with divine calligraphic skills as well.)

We didn’t do too badly as amateur pen repairmen go, but we were glad to be reminded that for truly difficult jobs and truly valuable pens, there are pros we can always tap around the world for their unique expertise. For the longest time, the bible of pen repairmen was the late Frank Dubiel’s “Da Book,” but a new generation of more scientifically savvy restorers has taken over. The legendary Richard Binder (who lent his name to the word “binderized,” to mean exquisitely finetuned and smoothened nibs) has himself retired, but nibmeisters John Mottishaw and Greg Minuskin can still refashion a perfect nib from a sorry scrap of gold, and out in Nebraska, Danny Fudge still services my Vacs and Duofolds when I can’t bear to break them myself. Ron Zorn in upstate New York has a backlog of at least six months, but he’s almost the only one who can properly put back a broken pen together—not with superglue or epoxy, but with a solvent weld that takes months to cure. (Can anyone here in Manila do these things? Beyond the simple repairs we did, the short and plain answer is no; Montblanc does do basic repairs in its service center in Rustan’s Makati, and sends on the tougher jobs to Hong Kong and Gemany.)

Is it worth it? That depends on how much you value your pens. If it’s a P500 Schneider or Inoxcrom, replacing it might be cheaper than attempting a fix; if it’s your grandfather’s Wahl Doric or Waterman Patrician, a $30 solution from Danny Fudge (plus postage, of course) will be a bargain. As far as I’m concerned, and as far as I can help it, every old pen deserves a second chance, if only because they’ll never be made again the way they were back in the 1920s. (That’s not entirely true: companies like Conway Stewart have come out with splendid revisions of the old classics, but these pens could cost you more than an iPhone.)

Boys being boys, and with our precious cargo back in their leather cases, we gathered around the table over scotch and coffee, and babbled into the wee hours about a host of manly subjects: cars and carburetors, terabytes and audio formats, Paul Simon and the Beatles, swords and light sabers, Malcolm Gladwell and Jared Diamond. Now and then some new words and brilliant ideas slipped into the conversation: hadoken, innumeracy, dyscalculia; now and then wives and women were mentioned, but not too often. And every five minutes or so, the talk drifted back to pens, about how gorgeous but oh how expensive the prewar Omas Extra Lucens was, about how Sheaffer Vac-Fills use a bewildering range of rod sizes, and, yes, how quickly vintage celluloid can melt in the wrong hands.

Such was our pen boys’ weekend, and—as I’m sure our wives appreciated—there are worse things men can spend their weekends on and weekends with than leaky Vacumatics.