EVERY SUMMER, when the UP National Writers Workshop caravan heads up to Baguio for a week-long literary retreat, our first stop right after we drop off our bags at the hotel is an art and ethnographic museum on Asin Road off Naguilian, built and run by National Artist Benedicto Cabrera, better known to all as Bencab. This Easter-Sunday visit with Bencab has become one of the staunchest of workshop traditions, as eagerly anticipated as the Friday evening poetry slam at the Mt Cloud bookshop.

Most years, there’ll be three National Artists in attendance at these meriendas—aside from Bencab himself, we’ll have workshop panelists Virgilio “Rio” Almario and Bienvenido “Bien” Lumbera with us (and if our prayers gets answered and poet Gemino “Jimmy” Abad gets named to this grandest of honors one of these days, there’ll be one more). It’s a treat for the workshop fellows, this leisurely afternoon with cultural heroes, and as mid-career writers with at least one major book or work behind them, they’re not expected to genuflect before the luminaries but to chat with them as peers—although, of course, it can’t be helped if some get star-struck and tongue-tied.

Bencab makes it easier for everyone by personally welcoming the workshop fellows (that’s him with filmmaker Jim Libiran, above) and leading them to the generous merienda, which also serves as his birthday celebration (he was born on April 10, 1942). Then he’ll lead a smaller group of fit and intrepid volunteers on a walking tour of the grounds, showing off new additions and developments.

It has to be said that the Bencab Museum has become a reason unto its own to go up to Baguio. Built on one side of a gorge (Bencab had the foresight and thankfully the wherewithal to acquire both sides, to ensure the integrity of the view), the modernistic multilevel museum and its adjoining buildings dominate the landscape, a white counterpoint to green. It’s been 13 years since Bencab decided to move his studio from the old artists’ village in Tam-awan to Asin, and we’ve had the privilege of watching the museum grow from year to year, a few bricks and exhibits at a time. These days, the museum features not only paintings—Bencab’s own and those of some of the best young Filipino artists today—but a world –class collection of traditional Northern highlands art, including the iconic bulol. The sculpted grounds covering five hectares all in all feature plots of homegrown strawberry, coffee, and lettuce, and this time we got to meet the museum’s newest denizens, the delight of squealing children—15 Peking ducks in the pond.

Despite the entrance fee of P100 per person (discounted to P60 for seniors and students), the place attracts many hundreds of visitors on weekends, and if you’d rather have Benguet coffee than acrylic abstractions, the museum has Café Sabel (named after Bencab’s signature character) with a fabulous view.

I’ve admired Bencab’s work since the early 1970s, when I first met him at the old Printmakers Association of the Philippines shop on Jorge Bocobo in Malate. Fresh out of martial law prison—where I’d studied art with a fellow detainee, the printmaker Orly Castillo—I was apprenticing with the masters at PAP, and Bencab himself would drop by. Knowing my limitations, I soon shifted from prints to prose—but not before I met my wife-to-be, the artist June Poticar, at PAP; the other bonus of that brief foray into printmaking was a lifelong friendship with people like Bencab.

When we visited him last Easter Sunday, Bencab was just about to leave for New York to participate in an international exhibition and symposium with 17 other artists from the Spanish-speaking world. He spoke eagerly of the new commissions he had been working on, including an eight-foot sculpture for the recently inaugurated Solaire casino. Not too long ago, he had been a resident artist at the Ken Tyler Print Institute in Singapore; his pieces have been realizing premium prices at international auctions.

Here, I thought, was an artist who, at 71, was still at his productive prime, generously sharing his experience and his influence with younger artists and the public through the museum. But while he’s assumed a public persona, he’s never forgotten—like all good artists—to return to his studio beside the museum and to work in creative solitude. You can’t share what you don’t have, and Bencab’s been great at doing both. Thanks again, Ben, and we look forward to more visits and chats with you. 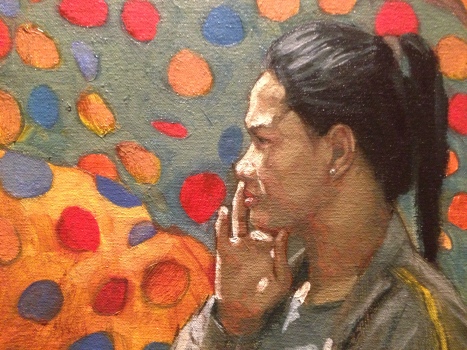 I WAS also fortunate to have been invited last month to the opening of Antipas “Biboy” Delotavo’s 13th one-man show, titled “Mallcontents”, at the ArtInformal gallery on Connecticut Street in Greenhills. Biboy and I also go back a long way to 1978 when he illustrated the poster of the first movie I ever scripted, “Tahan Na, Empoy,” for director Lino Brocka. It turns out that Biboy was born a couple of months after me in 1954 (as were Jacky Chan and Kazuo Ishiguro, so I suppose I’m in good company, ha ha.)

Biboy has been called a social realist, an artist whose work carries an explicitly political agenda. Indeed his paintings have demonstrated a keenly political sensibility, an awareness of how ordinary Filipino lives are shaped if not mangled by forces much larger and more powerful. You can see this in one of his most familiar works, “Itak sa Puso ni Mang Juan,” which depicts a man on the street walking against the backdrop of a giant Coca-Cola sign—suggesting, perhaps, a form of cultural imperialism, of how we’ve allowed brands and loyalties like Coke to define our tastes and therefor define us.

But whatever you may think of the politics of art, no one captures the contemporary, everyday Pinoy as sharply as Biboy Delotavo. His portraits of pedestrians in “Mallcontents” are painstakingly honest—neither pessimistic nor jubilant, neither warped nor romanticized. These are people just getting through another day, mulling over the usual problems (rent, supper, tuition, cellphone load, birth certificate, happiness, relief, rheumatoid arthritis); they don’t look particularly hopeful but they’re not despondent, either—they’re thinking about possible ways of coping. You look at a Delotavo portrait and see yourself and people you know, and you feel that one way or another you’ll survive, and the affirmation of that shared experience—of community and society—makes it well worth the visit to the gallery.