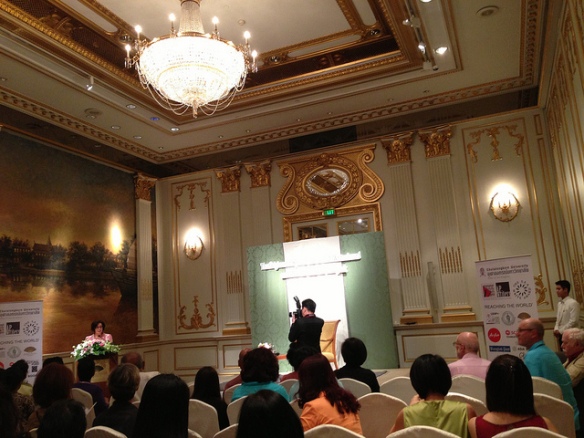 I’LL BEGIN with a sheepish apology (and a word of thanks) this week, for a stupid mistake I made in my piece about hats a couple of weeks ago. I was in the car on my way to a meeting in Makati last Wednesday when I realized to my great horror that I’d written something very wrong, and resolved to fix the problem in the blog version of my column at www.penmanila.ph, but of course, before I could do that, an alert reader named “Nestie U” caught the error and pointed it out to me. I’d written that “felt” meant “mashed leather pulp,” but it’s certainly not—it’s wool, not leather. It probably won’t mean much to most people, but if we self-proclaimed wordmeisters don’t get finicky about words and what they mean exactly, then who else is going to care? Many thanks again, Nestie, for reminding me of what a confused and forgetful fellow I could be, sometimes.

THIS IS going to be a week of announcements, not because I’m too lazy to write a properly thought-out column—you know how I can go on and on about my pet causes and peeves—but because my involvement in certain literary organizations and concerns gives me access to news and information that (given the usual space limitations) might not even make it to the literary or culture section of most newspapers. (Here in the STAR, of course, we do our best to keep you abreast of the most important and interesting goings-on in the cultural front.) So let’s get on with the literary news—these just in!

Most people don’t know this, but the NCCA—the government’s funding agency for cultural programs—has been supporting most if not all of the country’s major writing workshops for almost 20 years now. Without the NCCA’s substantial support, these workshops would have been forced to shut down a long time ago, or would never have become as highly developed as they are now. The workshops enable young writers to meet both their peers and their seniors, examine and affirm the writers’ talent, and initiate them into a community that can help sustain their productivity for life.

The UP workshop, for example, has been held every year for almost half a century, and while we now take only 12 fellows a year, we used to have more, so if you average everything at about 20 fellows per batch, we would have produced almost 1,000 alumni fellows since the beginning. Add to these the fellows who’ve gone to the Silliman, Iligan, Iyas (La Salle Bacolod), and other NCCA-supported workshops in the regions.

Like any other government agency, the NCCA has to be publicly accountable for how it spends the people’s money, so we at the NCLA thought of initiating a tracer study to see exactly how these workshops have helped our writers in their careers—say, in terms of books written and published and awards won for their work, among other criteria.

We’ve asked Dr. Christine Godinez-Ortega of MSU-IIT to be the project leader for the first phase of this project, and Christine and her team have formulated a set of questions that we’d like all workshop alumni from 1994 to 2010 to respond to. If you’ve attended and benefited from one of these workshops, please click on the link following and fill out the form.  http://www.msuiit.edu.ph/ research-extension/ncca/ tracer.php. Your response will go a long way to help sustain government support for the development of Philippine literature, as well as create a very helpful database and virtual network of all workshop alumni.

The second item on this week’s literary agenda is another call, this time for papers to submit to the “Reaching the World 2013” conference, scheduled for October 3-6, 2013 in Bangkok, Thailand. Spearheaded by the Asia-Pacific Writers and Translators Association, the conference is co-sponsored by Chulalongkorn University, the SEAWrite Award, and the Bangkok Metropolitan Administration.

Among many other Filipino writers, I’m one of the founding members of APWriters (www.apwriters.org), which has become one of the most active and viable organizations of writers and academics in the region. Last year, a formidable contingent of Filipino writers attended this conference, also in Bangkok, and our participation there left a very positive impression on the organizers and our fellow delegates, so much so that this year, I’ve been asked to head the Academic Committee that will receive proposals for papers and presentations.

Bangkok has been named by UNESCO as the World Book Capital for 2013, which is why we’re returning there (aside from the fact that Bangkok and Thailand are worthy of visiting for food, fabulous sights, fantastic shopping, foot massages, and other pleasures anytime, given any reason or excuse). Its famed Oriental Hotel has also hosted the annual SEAWrite Award, honoring the region’s best writers. (That’s a session from last year’s conference in the pic above.)

“Reaching the World 2013” will bring together authors, literary translators, scholars, teachers of Creative Writing, publishing professionals, and others from Asia and beyond. This three-day international conference with workshops and a free public day will enable writers, readers, scholars, students, publishing industry professionals and interested members of the public to network and share their work.

APWriters is a fairly open and friendly organization, and you just have to be a writer, a translator, a teacher, or have an interest in either writing or translation to sign up. Even in the academic area of the organization and the conference, we try to remain accessible, preferring discussions on topics of broad application to obscure and highly specialized ones that only a very few can understand and appreciate.

This year, for the conference, we are inviting papers and presentations on the following subthemes: Teaching Creative Writing; Literary Translations; Cultural Identity; Food in Literature; Music/Art in Literature; Online Writing; Young Writers; Literary Fiction; Creative Nonfiction (including biography and memoir); Poetry; Genre Fiction; and other related topics. Our main focus, however, will be the teaching of writing.

To offer a presentation or longer paper with a focus on teaching and practice of creative writing, email me, Jose (“Butch”) Dalisay, Chair of AP Writers’ Academic Committee, at jdalisay@mac.com. Deadline: August 10.

If you’re teaching Creative Writing at a university which offers this discipline and would like to offer a half-day or full-day workshop, send a paragraph describing the workshop you’d like to offer along with a brief bio to AP Writers’ Board Member Xu Xi at xu.xi@cityu.edu.hk.

If you would like to read your poetry or discuss your creative writing on the panels at the public forum on Sunday, October 6, in the Bangkok Arts & Culture Centre, or if you want to launch a new book at “Reaching the World 2013,” email Jane Camens at admin@apwriters.com.

I’ve reminded the early birds who’ve already emailed me to express their interest in presenting a paper that they will have to produce a ten-minute-maximum version of their paper (and that time will include setting up PowerPoint, should they need it). I’ve noticed that here in Asia, we tend to be too respectful of each other in terms of extending time limits, which many paper presenters routinely ignore, droning on and on without compunction. Well, I’m going to pull the plug on any such miscreant (I think it’s a gross discourtesy to the next speaker and to the audience itself to speak beyond one’s allotted time), so please practice your presentation with an alarm clock before leaving home.

There’ll be a small conference fee (last year it was only USD$50 per participant) and we have no travel funding whatsoever to offer anyone, including ourselves, so save up and book a budget fare early, and see you in Bangkok in October!

6 thoughts on “Penman No. 54: Calling All Filipino Writers”