IT SEEMS entirely fitting that I’m writing this review of a Singaporean novel practically on the eve of flying to Singapore for a writers’ conference. I’m actually meeting its author—Suchen Christine Lim—at that conference where she’ll be one of the keynote speakers, so I’m sure we’re going to have an interesting conversation at the kopi tiam.

We Filipinos have generally looked at Singapore with an odd mixure of liberal disdain and a pauper’s envy. We like to imagine the typical Singaporean as an ideological robot who has to be programmed to have good clean fun, even as we shamelessly admire and imbibe Singapore’s First-World comforts on our occasional sorties through Changi’s Terminal 3 and down Orchard Road. We feel deeply conflicted by the fact that over 150,000 Filipinos work in Singapore, mainly as domestic helpers—proud of their tenacity and sacrifice, while being shamed by our inability to give them good jobs at home, with their families. 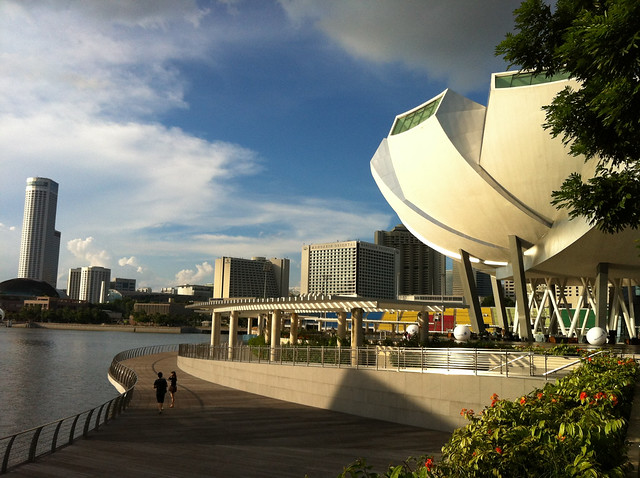 This kind of duality, we soon learn, exists within Singaporean society as well. Singapore isn’t nearly as monolithic as we commonly think, and what it is today came about as a result of a complex, continuing, and often painful process, one that involves folding the past into the ever-changing present.

This is the narrative burden assumed by Suchen Christine Lim’s The River’s Song (UK: Aurora Metro, 2013). It’s a novel that sprawls over more than three decades and straddles Asia and North America, but its achievement lies less in its scope than in its intimacy, which is sustained throughout the work. There’s no great mystery or wizardry to Suchen’s technique: it’s solid storytelling, employing compelling and credible characters caught between being rich and poor, being young and old, being man and woman, and being loved and unloved.

Premised on the modern renewal of Singapore’s riverfront, The River’s Song takes us back to that city-state’s backwater days, and follows the lives of its two main protagonists, the girl Ping and the boy Weng, whose shared passion for music helps relieve their abject poverty and turn an innocent friendship between children into an almost irreparably difficult love between adults. Suchen evokes this lost age of Singapore with masterly precision:

“Weng ran out of the hut, pulled off his shorts and jumped into the river. At the crack of dawn the river had stirred to life. Fires were lit in the stoves in his neighbors’ huts. Bare-chested boatmen squatted on the decks of their bumboats brushing their teeth with a bit of coconut husk, gargling into their tin mugs like hundreds of tenors and baritones in the choir. This was the music Weng had heard since he was a toddler on his parents’ boat, when they still lived on a boat then. He swam out to the middle of the cool brown water. Smoke from the charcoal and wood stoves was starting to tickle his nostrils. Soon the food stalls in the market would open and his stepmother would buy fried dough sticks or fried vermicelli for the family’s breakfast.”

Ping and her mother are taken in by a rich man, and she later goes to America for an education and an escape from all the pain that Singapore has meant to her, hoping all the while to keep in touch with Weng, who becomes an activist for the poor, embittered by what he sees as Ping’s desertion. How they get back together after failed attempts at happiness with others forms the novel’s present, and Suchen composes and choreographs this reconciliation in musical terms, with Ping playing the pipa (a Chinese guitar or lute) and Weng the dizi (a flute):

“The pipa lets out an anguished groan. The Ming Ensemble joins in with a sobbing of erhu strings. The guqin gives a rippled cry. In a lilting undertone, the dizi sings a sorrowful accompaniment, underscoring the pipa’s grief. When the pipa rages in the desert storm in a fury of plucked strings, his dizi soothes in calm counterpoint. When the pipa weeps among the bleak sand dunes, his dizi comforts with broef snatches of melody. The rapt assembly has never heard the likes of this before. As bamboo, wind and strings sweep across the desolate plains beyond the Great Wall, weaving an intricate song of bleak beauty and sorrow, some people in the audience weep. When the pipa grieves her loss, the dizi consoles. When the dizi queries, the pipa replies. You left, he rues. I left, the pipa sighs.”

As with all good novels, The River’s Song is much more than the love story at its core, as satisfying as that already is. It’s a virtual chronicle of how modern Singapore came to be, and an accounting of the human and social costs of modernization, particularly at the fringes of society where every penny and every inch of land matters. Reflecting its author’s maturity and sensibility, it’s not the kind of angsty rant we tend to get from juvenile writers these days, but a poignant lament that holds out hope for redemption despite—to advert to a section heading—the darkness of the waters.

Here and there, in a spot or two, I might quibble with Suchen over a note that may be slightly off-key; I suspect, for example, that the stray quotation from the Irish poet Seamus Heaney springs more from the author than from the character, whose musical artistry and intelligence I can’t contest, but whose literary inclinations had never been clearly established. Otherwise Suchen—one of Singapore’s most celebrated writers—has an impeccable gift for dialogue and scene-setting; the novel is practically a script, needing just a camera to become the movie its material seems cut out for.

I spoke earlier of the stereotypes that we non-Singaporeans have of that place and its people. Suchen Lim banishes these stereotypes and much of our ignorance along with them. Of course there were poor and homeless Singaporeans. Of course there was principled resistance to the regime. Of course there’s a steamy underbelly to the façade of manicured lawn, polished glass, and hard-edged steel that contemporary Singapore projects. Those of us who visit and remark, perhaps too casually, about the “soullessness” of modern Singapore will have good cause to rethink that assumption; the soul may not be in Marina Bay Sands, but it’s clearly alive in the literary imagination.

If you want to know Singapore beyond what the Lonely Planet guidebook will tell you, pick up a copy of The River’s Song; I know I’m going to look up Pagoda Street, one of the book’s locales, when I get the chance this week. The book is available on Amazon. (Suchen, a frequent Manila visitor and friend to many Filipino writers, also left a copy with the Gonzalo Gonzalez Reading Room of the UP Institute of Creative Writing in Diliman; have a look at it there, then find your own copy to cherish and to share.)