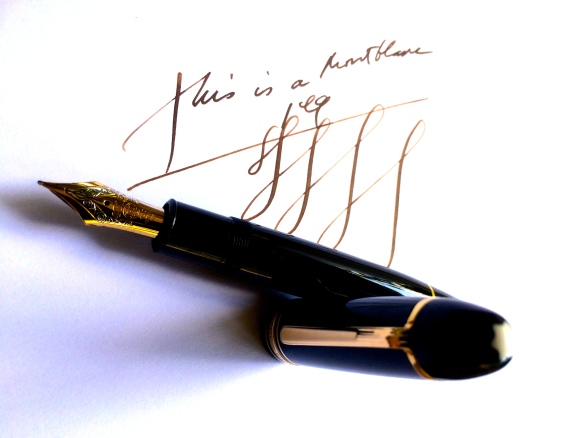 FOR THE past few decades, nothing has declared “I’m a fountain pen!” more emphatically than the Montblanc 149, also known as the Diplomat. This is the daddy of modern pens, the big kahuna, the standard by which other pens—fairly or unfairly—are measured. You’ll know a 149 when you see it. It’s as long and as fat as a cigar, which is probably why it’s been traditionally considered the quintessential man’s pen, the kind you’d find in the pockets of Supreme Court Justices, oldtime newspaper editors, and connoisseurs such as my friend the architect Toti Villalon, although fashionable but feisty ladies have been known to sport one.

You’ll also know that that big black pen is a Montblanc because of the white star (sometimes also called the “snowflake”) on top of its cap. Montblanc, which started out in Germany in 1908 as the Simplo Filler Pen Co., later chose the now-iconic white star to suggest the snow-capped peak of Mont Blanc (“white mountain”), the highest massif in the Alps. You’ll see the number 4810 on a Montblanc nib because that’s the height, in meters, of the mountain. (Montblanc, the pen or the pen company, is always spelled as one word; Mont Blanc the mountain is always two.) Some 149s also will have a white diamond—or even nothing—in lieu of the “snowflake,” which can be construed as the Star of David: not good for sales in many places in the Middle East.

The 149’s cap ring (like that of the 146, its junior sibling) will have “Meisterstuck” engraved on it; that’s German for “masterpiece.” This year, Montblanc marks the 90th anniversary of the Meisterstuck line, of which the 149—introduced in the 1950s—remains the flagship; appropriately enough, a special 149 with rose-gold trim was produced to mark the event.

If imitation is the best form of flattery, then there’s no pen more admired—because none more copied—on earth than the 149 (or, more accurately, the slightly smaller 146, but most people wouldn’t know the difference). You can almost be sure that, somewhere in Shenzhen, there are shops and families devoted to one and one thing only: the production of fake Montblancs, for sale in such places as Shanghai’s Nanjing Road or for export by the container van to countries like the Philippines, where they will be sold as cheap corporate giveaways or passed off as the real thing to unsuspecting buyers. Given this traffic, there are websites and pages just as ardently dedicated to spotting Montblanc fakes (here’s a quick tip: if your “Montblanc”’s nib says anything like “Iridium Point Germany,” it’s fake—that’s a generic steel nib employed by many Chinese makers.)

The real 149 is a classic, and deservedly so. Montblanc and the 149 gained popularity in the 1950s and the 1960s, as Americans returning from the War and from their growing contact with postwar Europe became more familiar and comfortable with things German, and with the high quality of German goods. There’s a story that when John F. Kennedy visited what was then West Germany to sign a treaty with his counterpart, Chancellor Konrad Adenauer, the German fumbled around for a pen, and JFK sprang to the rescue by offering his—a 149. 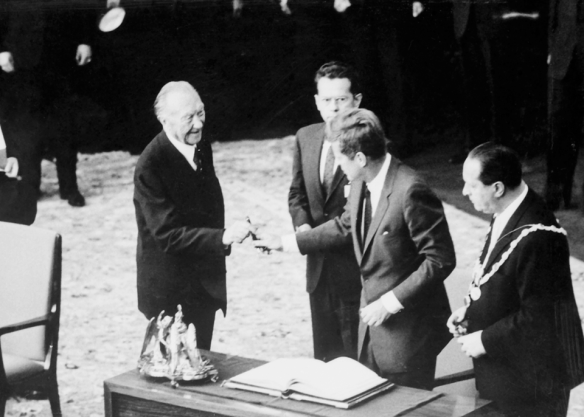 That 149, wherever it is now, should fetch a princely sum on the collectors’ market (like the big red Parker Duofold that Douglas MacArthur signed Japan’s surrender papers with). Indeed, even a new 149 (you can check it out locally at Rustan’s, the authorized dealer for the Philippines) will set most people back a few months’ wages. You can get a thousand cheap ballpoints for one 149—if a writing tool is all you’re looking for. Clearly, that’s not what 149 fanciers—yep, I’m one of them—have in mind.

Among 149 collectors, the pens to go for are not the shiny ones you can grab at the MB boutique, but the vintage ones made of celluloid from the 1950s and 1960s. The old, tricolor (gold-platinum-gold) nibs are also thought to be more desirable because they flex—the tines are soft and can spread apart, producing line variations that most modern fountain pens and certainly no ballpoints and rollerballs can. 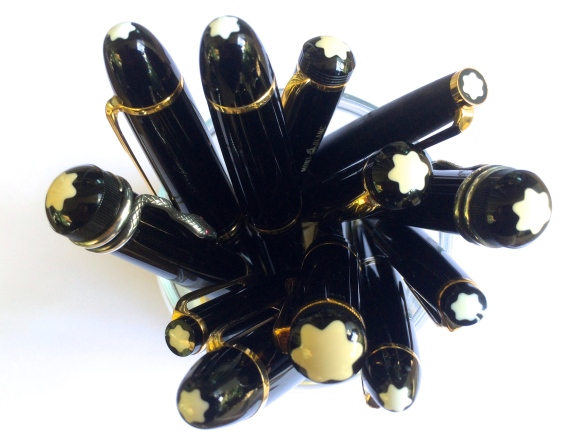 At one time or another, I’ve had maybe ten 149s in the collection, which isn’t too strange because I buy and sell pens to support the habit. I usually pick them up on eBay for a whole lot less than they’d go for in the store, which also means I assume a lot of risks that newbies would be well advised to steer clear of. I’ve kept three of these, and regularly use one. When people ask me why I go around with such a fancy and expensive pen in my pocket, I tell them that it’s because it makes me feel like a real writer, and because I’m 60, and should be able to use and enjoy what I damn well please before I croak.

Not everyone is a fan of Montblanc and of the 149. There are legions of rabid Montblanc haters who eschew the brand in the belief (somewhat justified) that many people buy Montblanc to acquire instant status, and that the company itself has encouraged this pretentiousness by marketing the 149’s plastic as “precious resin.” Detractors see this as pure hype, designed to rack up sales among ambitious junior lawyers and middle managers.

Do you think I care what they say? I’ll never be able to afford the Range Rover or the rose-gold IWC Portuguese of my big-boy fantasies, but when I make loopy figure 8s with my vintage 149—found online for next to nothing at a small auction house in Ohio—I feel like there’s justice in the universe, after all.