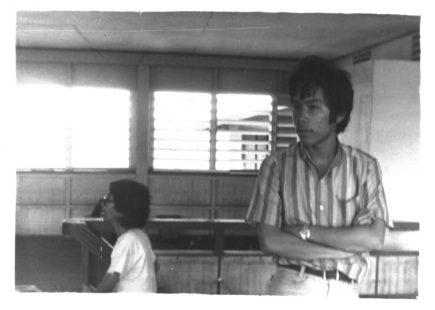 I WAS very sad to hear of the recent passing of an old colleague from my first foray into journalism—Nemesio Dacanay, who was then the City Editor of the Philippines Herald, one of the pre-martial law period’s smaller but pre-eminent newspapers. A relative of his texted me about his death and interment, but I was out of town and felt bad that I couldn’t even pay my respects in person, so I’ll do it here.

Five years ago, in this column, I had to issue an apology—and I was happy to do so—having inadvertently suggested in a previous piece that “Dac” had passed on to the hereafter. As it turned out, he was still very much alive, as his daughter Christine reminded me. This time, unfortunately, the news was real.

The story of my connection to Dac and of how I got into the newspapers is something I may have told before in bits and pieces, but here it is in full. The time was early 1972, and I had just turned 18. I was already a full-time activist, having dropped out of my classes in UP, a lanky, chain-smoking lad who was already a veteran of many a Plaza Miranda march and of the Diliman Commune.

In UP, I hung out with a group of older Journalism majors who were close to graduating and who would, very shortly after, begin to make a name for themselves as reporters—people like Wilson Bailon, Rolly Fernandez, Jun Engracia, Efren Cabrera, Rod Cabrera, and Val Abelgas, among others. I had great respect and admiration for these guys, but at the same time, it annoyed me to know that they were soon going to find and land jobs, while I—technically still a freshman, with but 21 completed units to my name (3 of them good for a “5.0” in Math, the consequence of absenteeism)—was going to be left behind.

I should explain that at 18, I had no greater ambition than to become a journalist. I’d written some stories, poems, and plays, but I had no plans of becoming a creative writer, and might even have thought journalism superior to poetry (and why not?). I had been editor in chief of the school paper at Philippine Science High (following in the gargantuan footsteps of Rey Vea, Mario Taguiwalo, and Rodel Rodis), and I found that I savored the romance of printers’ ink and hot lead (that’s “lead” with a short E for you young ones, the molten metal that magically turned into letters in reverse).

As soon as I stepped into UP, at 16, I did the three things I’d put on my agenda, after enrollment: join the Nationalist Corps (and later the Samahang Demokratiko ng Kabataan, or SDK), join the Alpha Sigma Fraternity (to which high school heroes like my Physics teacher Vic Manarang and firebrand Gary Olivar belonged), and join the staff of the Philippine Collegian.

It was in the nationalist movement and those long nights of proofreading at Liwayway Press that my desire to become a reporter flourished. Never mind poetry and fiction; I wanted to feel and to record the ground shaking beneath my feet from the steps of a thousand marchers, to trace the arc of tear gas canisters flying across the plaza, to bear witness to what we were all convinced was the forging of a bright new future, with all the sparks and all the smoke that came with the process. To be a reporter at that time was to be in the very womb of history, and I thought nothing was more thrilling and more important than to be there on the frontlines, notebook and ballpoint in hand and a barely stifled battle cry rising up my throat: “Pierce the enemy with your pens!” (That was the slogan silkscreened on my jacket.)

As you can see, as a teenage Maoist, I had no idea of and no patience for “objective” and “dispassionate” journalism. I hadn’t even taken one formal unit of Journalism in UP (I was an Industrial Engineering major, and still plowing through my GE subjects) and had embraced the notion that journalism was and had to be a partisan activity, convinced that Malacañang had bought 90% of the Philippine press, with the notable exception of progressives like Tony Zumel, Satur Ocampo, and Rolly Fadul, and young blood like Roz Galang and Millet Martinez. We were going to be the vanguard of what we called the Second Propaganda Movement.

But I didn’t want to be stuck on campus; it was a wide-open arena beyond Diliman, so when my friends began applying for jobs with the newspapers shortly before graduation in early 1972, I tagged along, hoping to land something, anything. (I’d already written and sold a teleplay to the TV drama anthology Balintataw in 1970, when I was 16, so I didn’t lack in self-esteem.) I remember walking up to the editor of the Manila Chronicle, Amando Doronila, and boldly announcing that I wanted to apply as a reporter. “How old are you?” the man asked in all reasonableness. “Eighteen,” I said. “Come back in a few years,” he suggested, not unkindly.

It was like that, one prospect after another, until my path led to the old Philippines Herald office in Intramuros, sometime in March or April. It was must have been around one in the afternoon, because the only person in the newsroom was Nemesio “Dac” Dacanay, whose name I didn’t even know at that point. He had a groovy look about him: dark shades, a colorful, open-necked shirt, and an impish grin. I told him what I was there for, and I can’t recall how long I begged to be given a chance, but finally, if only to get rid of the pesky walk-in, he said: “Where do you live?” I said, “Quezon City.” He said, “Okay. Go back to Quezon City, then come back in three days with a story. Understood?”

I stepped out of the Herald on a floating cloud—I was positive I would deliver as directed. Over the next three days, not knowing anything about real newswriting, I walked around the Quezon Memorial, waiting for some dreadful accident to happen that I could breathlessly report on. The world remained blissfully peaceful, and the only thing that came crashing down was my dream of becoming a journalist. On the third day, I was so tired and depressed that I took a jeepney to the Delta Theater, and decided to cool off in the moviehouse. I watched the screen. The movie was so awful I can’t even remember its title. When it was over, I went home, collected my thoughts, and pulled out my typewriter.

Then I took a bus to Intramuros, and handed Dac my story—a movie review. Damn—I could hear him mutter, and I could see him sizing me up through his shades—okay ka, kid. “I’ll pass this on to Nestor,” he said, referring to the venerable Nestor Mata, who handled the features page. “He’ll take care of you.”

And so I was hired at 18 as a general assignments reporter, the greenest of greenhorns in a roomful of veterans that included editor in chief Oscar Villadolid, news editor Joe Pavia, reporter Lito Catapusan (who took me under his wing), and a deskman who moonlighted as a songwriter named George Canseco. Over the next few months, I would make the rounds of the police, sports, and City Hall beats, cramming three more years of college into a semester. Thanks to a guy who humored me named Dac, I had achieved my ambition of becoming a journalist. (By July, in a flash of activist fervor, I would resign in solidarity with striking workers, and move over to Taliba as a correspondent right up to martial law, when we all lost our jobs and the press as we knew it vanished overnight. But that’s another story.)