THE WORD “staycation” must have been invented for people like my wife Beng and me, who now and then like to laze around in a hotel away from home, though not too far away that we’d have to book a flight or take a long bus ride. For those who’ve been living under a rock, a “staycation” is defined as “a holiday spent in one’s home country rather than abroad, or one spent at home and involving day trips to local attractions.”

For us Pinoys, a staycation is halfway to heaven. It’s neither home nor Hawaii; usually, it means parking the car and one’s brood in a local hotel, then spending the weekend pigging out on restaurant fare and TV marathons, scouting the nearby shops, and flopping around in the pool. So it’s not free, but it won’t break the bank, either.

Of course, there will be people who—for perfectly good reasons—will ask, “Why even bother? Why not just stay at home?” Yes, sure, home won’t cost you a thing, but that won’t do what a staycation does, which is to play and pretend for a blessed couple of days that you’re somewhere or someone else, like a tourist in your own country. A fancy word critics might use for the experience is “defamiliarization,” which is looking at the same old things with new eyes, producing unexpected effects.

Well, Beng and I got a pleasant dose of defamiliarization a couple of weekends ago when a friend generously passed us a staycation package that she and her husband couldn’t avail themselves of, and we found ourselves at the door of a hotel that we’d never really noticed before, in a neighborhood we’d never really lived in before.

The neighborhood, of all places, was Makati. Both steadfast northerners, Beng and I have lived in Quezon City nearly all our adult lives, and crossing Guadalupe Bridge—despite the many thousands of times we’ve done it for business and pleasure sorties to the south—still means crossing a psychological barrier. Makati was always just a place for shopping or for work, or otherwise for attending some bash at a big hotel. And I realized that until that weekend, it had probably been at least 15 years when we last slept over in Makati, thanks to our daughter Demi who was then working for a big hotel chain.

So it was about time we got a bit cozier with our southern metropolis, and off we went to the City Garden Grand Hotel at the corner of Makati and Kalayaan Avenues, a 33-storey, 300-room structure that I vaguely remembered seeing rising but had never stepped into. (An older and smaller cousin, the City Garden—minus the “grand”—was just across the street, and I almost mixed up the two.) The drive up the parking ramp was a bit steep and the elevator could have used a shot of adrenaline in its pulleys, but that would turn out to be the first and last of our complaints.

We were booked into a junior suite on the 30th floor, with a spacious living room and entertainment area (and a large sofa that could have easily slept one more) plus a bedroom with a king-size bed; the suite also contained one big bathroom and two toilets, two TVs, a full-size fridge, a microwave, and a coffeemaker—plus, let’s not forget that most essential of today’s amenities, free wi-fi. In other words, it was a hotel easily at par with its four-star counterparts in Hong Kong or Singapore in terms of creature comforts. We were on the north side of the building, so throwing our curtains open revealed a vista we weren’t used to seeing—our part of the city, stretching from the Pasig to the hills of Antipolo. 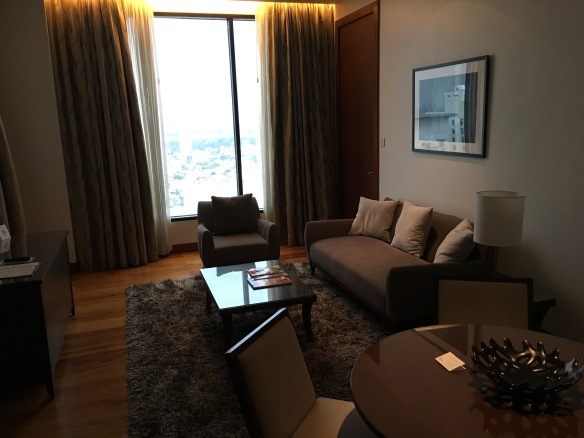 An even better view could be had just two floors up, as we soon discovered. The City Garden Grand’s piece de resistance is arguably its 32nd-floor Firefly roofdeck bar, which offers a nearly 360-degree perspective of Manila and its environs. (A terrace on the 33rd floor is used for weddings and other special events.) Looking southward at sunset, Laguna de Bay shimmered on the left and Manila Bay glowed on the right, while behind us the darkening north soon lit up like a bed of stars. With a cold beer in hand, the swimming pool bubbling in a corner of the roofdeck, a barbecue on the grill casting its savory spell, and the city twinkling at our feet, we felt utterly transported. The sense of estrangement was enhanced by the preponderance of foreigners in the hotel’s clientele—Australians, Brits, and Germans, it seemed to me, who were leveling up from backpacking.

Beng’s a huge fan of breakfast buffets, and even more than dinner, we both look forward to a hearty breakfast to start the day with, and will often judge a hotel by its breakfast buffet; we’d rather live with a smaller room than a skimpy spread. In this respect, the City Garden Grand passed with flying colors, offering a range wide enough to please everyone, from mushroom with truffles to crispy dangguit (and the menu rotated from one day to the next, providing even more variety).

But the best was yet to come, as we were to discover at dinner. Beng and I usually prefer to go Chinese, but as a set dinner at the hotel’s Spice restaurant on the 7th floor was included in the “Love and Luck” package, we decided to give it a try, despite my well-known and admittedly strange aversion to fine dining. Dinner proved a pleasant shock to my pedestrian palate, from the organic mixed salad of shrimp toast and edible flower in strawberry vinaigrette to the broccoli and garlic soup with beetroot foam and focaccia bread to the entrée of beef wellington with bone marrow sauce (Beng’s choice) or sous vide of New Zealand salmon with brown butter asparagus (mine). (I may be a culinary philistine, but I’m addicted to food and cooking shows, so I knew at least what sous vide involved and meant—in short, scrumptious.) The dessert of deconstructed strawberry shortcake with berry coulis and chocolate marble proved too much, on top of everything—we ordered just one and happily had the other taken out. 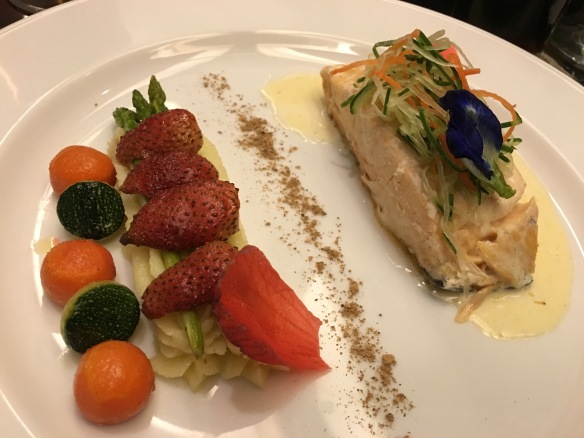 We were so impressed that we asked to see the chef, and were even more floored when he turned out to be no imported Frenchman or Swiss but an entirely homegrown 24-year-old, Ariel “Yeye” dela Umbria, a proud graduate of NCBA’s HRM program.

The surroundings of a hotel are always part of the package, and Beng and I were glad to spend the weekend exploring Century City Mall (just a couple of blocks away) and the Greenbelt-Glorietta area (a longer 20-minute walk, but good for the exercise). Of course, the entire Kalayaan-Jupiter district is a prime restaurant and entertainment zone, which we’ll revisit at greater leisure one of these days.

Meanwhile, our warmest thanks to that friend for the weekend break and for giving us more reasons to enjoy the metropolis; 30 floors up, it never looked so good.