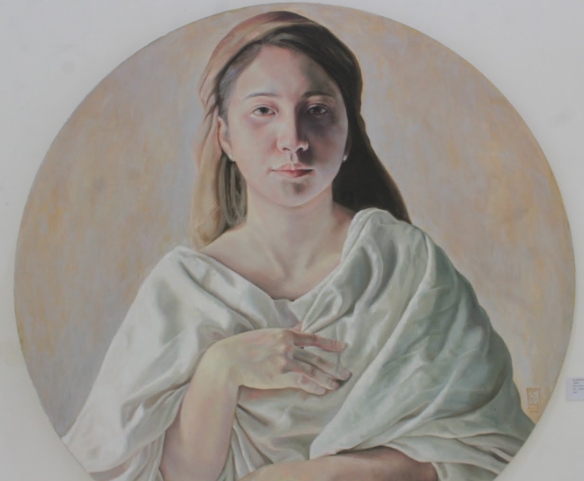 JUST LIKE the city itself, which has undergone a refreshing makeover these past few years under the watchful eye of its chief political patron, former Senate President Franklin M. Drilon, Iloilo’s artists have been brimming with a new vitality that art lovers beyond the region have begun to appreciate.

I know that, because a few months ago, my wife Beng—herself an Ilongga artist and conservator who’d gone briefly back to Iloilo on family business—came home with the news that while in Iloilo, she had found and purchased a large painting by one of the city’s brightest young talents. The word “large” pricked my ears because it somehow sounded like “expensive” to me, but then she said she was paying for it herself, so I asked no further.

But I had to find out who the artist was, and Beng—who regularly tends to Amorsolos, Manansalas, Botongs, and Ocampos in her line of work—began gushing like a fangirl about a young painter she’d met while touring the Iloilo art scene with her old friend Rock Drilon. Rock, himself a painter of no mean stature (a recent exhibit at West Gallery displayed a penchant for organic, microbial forms), has been based in his home city for many years now, and has been a guru of sorts to younger artists there. So it was Rock who took Beng around to introduce her to his wards and their work, which was how this haunting painting of a young woman in white drapery found its way to our home in Quezon City. (It was too large to fly home with Beng and had to be professionally packed and shipped; I didn’t get to see it until months later.)
That’s when I first heard of Kat Malazarte, whose first solo exhibit Beng had seen at Casa Real de Iloilo, where Beng’s chosen work titled “Purity” (an apt choice for anyone surnamed Dalisay) had been the centerpiece. Just 20 at the time, she had already won the Vision Petron National Student Art Competition in 2015 for her video entry “Tingnan nang Malapitan, Damhin nang Malaliman” (Examine Closely, Feel Deeply). Indeed there’s a classical composure and pensiveness to Kat’s work, uncommon in artists of her age more prone to wanton kineticism. Her self-avowed themes of “purity, innocence, chastity, modesty, inner silence, contemplation, and state of nothingness” are monastic notions one might associate more closely with a nunnery (Kat’s a Fine Arts cum laude graduate of the University of San Agustin), and her subject’s luminous hands might have been rendered by a Renaissance master.

So it was with much delight that Beng dragged me a couple of weekends ago to a three-day show at the Gallery at A Space on Legazpi Street in Makati, where a unique concept was being tried out by a pair of young and enterprising creatives, Karen Nomorosa and Prim Paypon. On show were the works of none other than Kat Malazarte and another rising Ilonggo star, the sculptor Harry Mark Gonzales. Dedicated to the theme of “The Quiet Strength of a Woman,” the show of Kat’s paintings and Harry’s sculptures proved a perfect pairing—much like the show’s instigators themselves, who both have outstanding corporate and science backgrounds (both are summas—she in CS, he in Biology) but who’ve taken on the more daunting challenge of promoting Filipino art through their startup venture, Curious Curator. 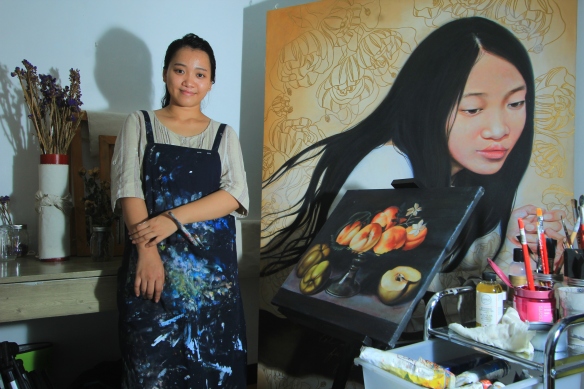 “Curious Curator was conceptualized in order to help budding and potential artists from outside Metro Manila, especially from the Visayas and Mindanao, penetrate the mainstream art scene,” said Karen and Prim. “Keeping the welfare of the artist front and center, Curious Curator manages the financial, marketing and sales aspect of the collaboration so that the artist can focus on the creation process. Curated and conceptual art exhibitions are held in non-traditional venues to reach a wider audience. This enables the startup to promote the evolving Filipino artistry while diversifying and simplifying ways that budding art collectors can secure original but affordable art pieces.”

The two-person exhibit at A Space realized that mission. While we had already seen Kat’s work, Harry’s cold-cast marble figures, more than vaguely reminiscent of Henry Moore’s sinuous women, were another revelation. Coming from a background in IT and with a large brood of siblings to help support (he once drove a sikad around the city), this carpenter’s son put his faith in his vision and his hands, and began sculpting pieces that quickly won local collectors over. The self-taught artist won a Metrobank Art and Design Excellence Award in 2007 for a terracotta sculpture he crafted to protest an oil spill in Guimaras. “My main inspiration for these pieces is my mother,” he told me as we surveyed his pieces, whose exaggerated torsos suggested an overflowing fullness of all good things. 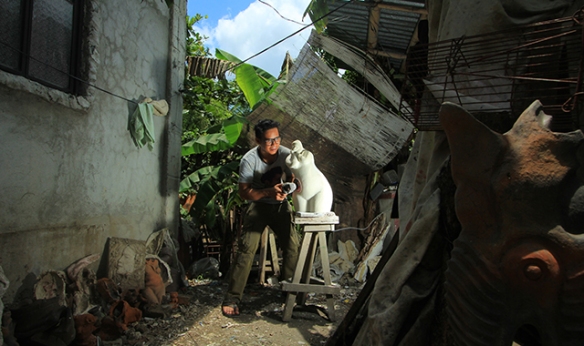 It was too bad the show ran for only three days, from September 30 to October 2, but with rentals at a premium, Karen and Prim have had to be more creative in their marketing, aggressively promoting the featured artists and their work online and selling a good number of them even before the show opened.

As for myself, I got the best part of the deal when Beng generously agreed to lend me Kat’s signature work “Purity” to hang in my new office at the UP Institute of Creative Writing (after the Faculty Center fire last April, we’ve found a new home in Room 3200 of Pavilion 3 at Palma Hall in Diliman).

But there are even more exciting events on the Iloilo art calendar to look forward to, chiefly the Visayas Islands Visual Arts Exhibit and Conference (VIVA Excon) which will be held from November 17 to 21 in Iloilo City. The event will take place in four different venues: the University of the Philippines Visayas (UPV) Art Gallery for the Garbo Sa Bisaya Awardees Exhibit; the Museo Iloilo for the Romeo Tabuena Tribute Exhibition; the UPV Auditorium for Turns in Form (Curated Contemporary Art from the Visayas); and the Visayas Art Fair.

VIVA Excon will also feature lectures on contemporary art practices, talks by artists, and workshops; an art conservator named June Poticar Dalisay, aka Beng, has been invited to talk about art conservation and restoration, and I’m going to do my darnedest best, my schedule permitting, to tag along. Left to herself, Beng just might drag home another local discovery—not that I’d mind too much.