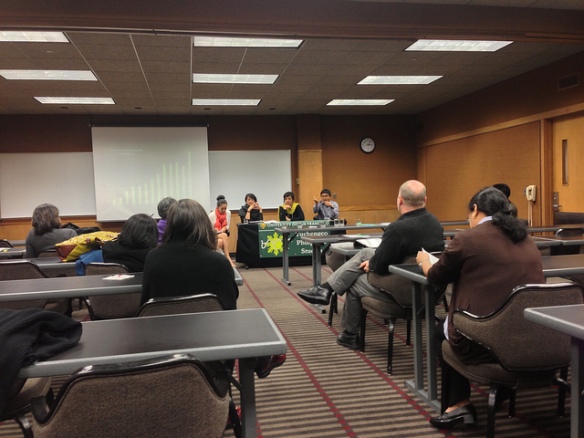 THANKS TO superstorm Sandy, which shut down nearly all public traffic on the US East Coast, my flight back to New York from Lansing, Mich. was canceled a couple of weeks ago, requiring me to stay for the last day of the International Conference on the Philippines (Icophil), where I had come to read a paper. I’d planned on leaving that Tuesday because our departure for Manila was set for Thursday, and I wanted the extra day to tie up loose ends and do some last-minute shopping with Beng, who was waiting at her sister’s in New York. But Sandy nixed all that, threatening even my flight home.

But Providence must have had other things in mind, because that last day at Icophil turned out to be a most productive one for me, in terms of making new contacts and friends and listening to provocative presentations.

Let me report, first of all, that Icophil 2012—the ninth of this once-in-four-year series—was a resounding success, with about 250 participants signing in, well over the 150 the organizers had been expecting. This means that there’s a lot of interest in the Philippines and in Philippine studies out there, not only from us Filipinos but also from foreign scholars specializing in Philippine concerns and affairs. (And if you’re wondering why, ask instead why not—given how we’re a fairly large country of more than 90 million people, living in one of Asia’s richest cultural crossroads and exporting our labor and talent to nearly every other country on the planet.) Indeed, about half or more than half of all the participants I met at Icophil weren’t based in the Philippines (from where, admittedly, going to international conferences can be quite expensive, especially without university or government support).

What were they interested in? As Icophil’s programme went, everything from archaeological digs, Pinoy boxing, and the Ati-atihan festival to the economy, indigenous peoples, peace building, and electoral reform. There’s never a dearth of subjects to be explored where the Philippines is concerned, and every door at Icophil was an invitation to a new dish at an intellectual smorgasbord. Everyone I spoke to agreed that they had a hard time choosing which session to attend, and I myself ended up walking into session rooms almost at random, imbibing whatever was on offer to get the full range of things.

I learned a lot by listening to Jay Gonzalez—who teaches political science while also serving as an assistant boxing coach at the University of San Francisco—talk about how he used boxing as an entry point to introducing his students to Filipino and Asian values and attitudes. Robert Balarbar of the National Museum explained the intricate process by which he and his team restored Botong Francisco’s “The Progress of Medicine in the Philippines,” a painting now hanging at the Philippine General Hospital. Robin Hemley of the University of Iowa undertook his own investigation of the controversy surrounding the alleged discovery of the Stone Age Tasaday tribe in Mindanao in 1971—a discovery soon denounced by critics as a hoax—and came to the tentative conclusion that the truth was probably somewhere in between the claims of both believers and naysayers. Sharon Delmendo, a professor at St. John Fisher College in New York who has written extensively about Philippine-American relations, shared the early fruits of her recent research on the “Manilaners”—Jewish refugees from Nazi persecution who found refuge in Manila under the auspices of President Manuel Quezon. Her findings were supported by film footage and interviews put together by independent Fil-Am filmmaker Sonny Izon. Speaking of film, award-winning director Nick Deocampo closed the conference with a screening of his brilliantly animated new documentary on American influences in Philippine cinema.

I’m becoming something of a recluse the older I get, but Icophil—and that extra day—reminded me of how valuable and important it was to keep in touch with fellow academics, particularly those engaged in significant and interesting research that very few other people can be expected to undertake. That’s the burden of scholars and scholarship: their concerns may seem obscure if not downright silly and useless to more practically oriented people, but their ultimate service is to help us better understand ourselves.

They don’t do our thinking for us so much as lay out possible ways of thinking about a problem or situation like migration, conservation, or resource management. I’m fairly sure that many scholars would make lousy executives (although this has been resoundingly disproved in some cases), but their insights into human and social behavior, not to mention their understanding of the physical and natural world, help politicians and businessmen make smarter decisions (unfortunately, not always more socially beneficial ones).

At Icophil, over the farewell dinner that I would have missed had I left on schedule the day before, I also had the pleasure of meeting Stephen Feldman and Mario Feir, who together run Asian Rare Books (www.asianrarebooks.net) from One McKinley Place in Global City. ARB had operated in New York City for over three decades before moving to the Philippines, where Stephen and Mario oversee an incredible, multi-thousand-volume collection of rare books. It’s accessible by appointment only, and I fully intend to avail myself of their kind invitation to visit them one of these days.

To digress a bit, I had one more reason to be rushing home to the Philippines, notwithstanding Sandy. As a shameless, diehard ‘60s liberal, I’m a big Obama fan, and wanted to see him re-elected. But I seem to have had a personal history with American presidential elections: I was in the United States on my first visit when Ronald Reagan won in 1980, and there again as a grad student when George Bush the Father won in 1988. In 2008, I was also in the US on a family visit, but left just a few days before the election, and Barack Obama won. Call it a voodoo jinx, but I knew I had to be out of there before November 6 if I wanted my guy to win. And that’s what happened—Beng and I managed to fly out of JFK on November 1, a day after the airport reopened. Barack, you owe me a big one.