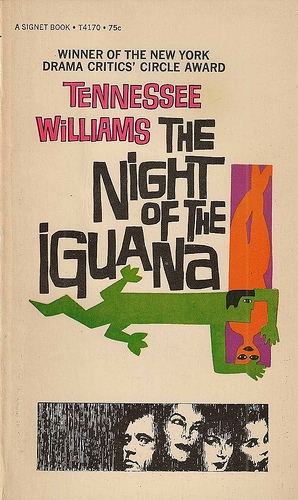 IN MY graduate writing workshop the other week, I received two essays from my students, one titled “Fasting and Abstinence” and the other “Portrait of a Matron.” They were very interesting and well-written pieces, with every potential to be outstanding upon revision. Predictably, the first essay dealt with an eating disorder, and the second with the author’s mother. This prompted me to observe that other revisions aside, these pieces deserved better titles, because their present ones left nothing to the imagination, and worked like big red arrows pointing directly to their respective subjects.

As it happened, I’d already been thinking about writing a short column-piece on the art of the title for some time. As an author, editor, teacher, and reader of books, I deal with titles every working day, and while many if not most of them can be as nondescript and forgettable as the faces of people you meet on the street, a few will distinctly stand out for one reason or another. Memorable titles can be as showy as a bouffant hairdo in electric pink or as plain and as innocent as a five-year-old’s cowlick, but they’ll invariably make you want to take a closer and longer look.

I don’t think that there are any hard-and-fast rules for what makes a good or a bad title; I just know one when I see one, and while tastes will naturally vary, “memorable” can apply to both good and bad. Also, let’s make it clear and not forget that a great title won’t save a bad book, or turn a mediocre piece into a classic (what I’d call “a small shop with a big sign”); conversely, many great books have gotten by with the plainest titles (nothing plainer than The Bible, “the book” itself). Can a short story title be any shorter than John Updike’s “A&P”?

Some titles can simply be too strange; had F. Scott Fitzgerald stuck with one of his first options for titling his new book in 1925, it’s highly doubtful that even Leonardo di Caprio and Baz Luhrmann could have done much to sell a movie version titled Trimalchio in West Egg or another possibility that Fitzgerald considered, The Gold-Hatted Gatsby.

But to be helpful to my students, I told them what I thought a good if not great title should be and should do, and it’s this: it should hint at what the work will be dealing with, but not spell out everything. In other words, it should be oblique, with a touch of mystery, just enough to pique the reader’s interest. This is much more crucial in fiction, which thrives on ambiguity, than in nonfiction, where a certain degree of clarity is to be expected. “The Joys and Pains of Puppy Love” could be suitably efficient for a juvenile nonfiction piece devoted to just that topic; but the only way you could get away with that in a short story would be to assume a seriocomic pose and to deliver far more than what the title might suggest (for that kind of treatment, check out Updike’s 1960 story “You’ll Never Know, Dear, How Much I Love You”).

In no particular order, let me just intone, as in a hypnotic chant, some titles of stories, novels, and plays that have impressed and stayed with me over the years (by editorial convention, titles of books, novels, and plays are italicized; story and poem titles are enclosed in parentheses): Love in the Time of Cholera and One Hundred Years of Solitude by Gabriel Garcia Marquez; “In Dreams Begin Responsibilities” by Delmore Schwarz; “For Esmé, with Love and Squalor” and “Pretty Mouth and Green My Eyes” by J. D. Salinger; The Unbearable Lightness of Being by Milan Kundera; The Importance of Being Earnest by Oscar Wilde; “Of This Time, of That Place” by Lionel Trilling; Midnight’s Children by Salman Rushdie; “Six Feet of the Country” by Nadine Gordimer; Like Water for Chocolate by Laura Esquivel; Interpreter of Maladies and Unaccustomed Earth by Jhumpa Lahiri.

Some authors—the short story writer Flannery O’Connor, the playwright Tennessee Williams, and the novelist Carson McCullers among them—had the gift of titling, almost invariably coming up with titles that burned themselves into your consciousness. Think of O’Connor’s stories “Everything That Rises Must Converge” (which the earnestly Catholic O’Connor borrowed from Teilhard du Chardin) and “A Good Man Is Hard to Find” (which a female colleague, more earnest than Catholic, transposed into “a hard man is good to find”). Williams wrote A Streetcar Named Desire, Cat on a Hot Tin Roof, Orpheus Descending, Sweet Bird of Youth, and The Night of the Iguana, among other plays. McCullers, brilliant but anguished, produced the novels The Heart Is a Lonely Hunter, Reflections in a Golden Eye, and The Member of the Wedding, as well as the short novel The Ballad of the Sad Café.

You’ll see from these examples that I—and the writers I admire—seem to have a preference for longer, almost ostentatious titles, and I suppose it’s true that, uhm, length matters, generally speaking, adding a splendiferous sonorousness (now that’s a terrible title) to the work. Here in the Philippines, no one has employed longer titles than Gregorio Brillantes, some of whose stories I teach—among them “The Cries of Children on an April Afternoon in the Year 1957” and “Faith, Love, Time, and Dr. Lazaro.” Manuel Arguilla’s 1940 story “How My Brother Leon Brought Home a Wife” now sounds almost quaint, but it works perfectly with the temper of that time; and how could one not be drawn to Aida Rivera Ford’s “The Chieftest Mourner” and “Love in the Cornhusks,” classic stories both about Filipino families?

Perhaps surprisingly, despite my expressed preference for the long title, my own works have been rather sparingly titled, with a few exceptions, such as my first novel Killing Time in a Warm Place; the title-stories of my three collections—“Oldtimer,” “Sarcophagus,” and “Penmanship”—have just one word each. I know that you might be seen to be trying to be too cute or too enigmatic this way, but I suspect that my reticence was formed, early on, by an abject lesson from master to neophyte on the perils of overblown prose.

The master was none other than Greg Brillantes, who in the 1970s edited a highly regarded literary journal called the Manila Review, where I—the precocious 20-something newbie with far more ambition than talent—yearned to be published. I sent him a story about a seaside flirtation between a village maiden and a fisherman (a cheap echo of Arguilla, it seems to me now), which I grandiloquently titled “Hour of Defilement”; a few weeks later, my self-addressed, stamped envelope returned to me, with a note from Greg that he had accepted the story, but had decided to change the “sophomoric” (a word I probably had to look up then) title to the less conspicuous “Nights by the Sea.”

That wasn’t the end of my titling aspirations. A few months later, I became enamored of a title that kept running through my head—“Spinsters’ Evenings and Bachelors’ Nights”—and swore to write a story to fit the bill. I did, and sent the piece off again to Mr. Brillantes, who wrote back, in so many words: “I’ve just received and glanced at your new story, and I haven’t finished it yet, but a story with that title can’t be half-bad, so I’m taking it….” My day was made, but I didn’t push my luck, and went on to write stories with titles like “Heartland,” “Cameo,” and “Voyager,” obsessing less with the title than with the opening paragraph, which I was banking on to draw the reader in. But that’s another story.

Next week, I’ll talk about working titles (and changing your mind), and putting titles to artworks and movies.