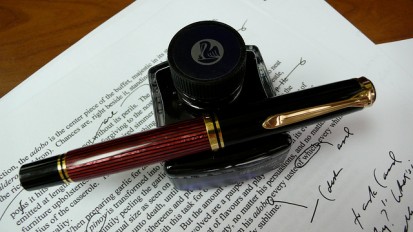 LAST WEEK I promised to write a piece on editing or editorship as a job, and here it is.

Here in the Philippines, when we say “editor,” we usually think of a newspaper editor, someone who lords it over the newsroom with a fearsome temper, wielding a pen like a saber. That’s the growly character we also often see in the movies, a 60-something guy who chews out a quivering cub reporter.

Most editors I’ve met are actually quiet, even mousy people who get their work done with a pencil in one hand and a cup of coffee in the other. Their names might not even appear on the books or the materials they edit. What they do is really an art unto itself, but there are no awards given, no National Artists designated, for editing. The editor leaves a ghostly signature behind; you’ll just know that an editor has been there by the effortlessness and the limpid clarity with which you read the prose of a certain piece.

Editors work with writers to polish drafts and to turn them into the best reading fare they could possibly be. The presumption, of course, is that every writer needs an editor—even the best ones; I certainly believe this, and as an author I expect a reputable publisher to have my manuscript gone over by another pair of eyes. Even in this newspaper, I’ve been saved many a time from woeful embarrassment by the alertness of my editors.

Editors review and revise manuscripts for several things: the accuracy of the contents, grammatical correctness, and stylistic felicity. As the intermediary between the author and the reader, the editor has to ensure that the author’s message comes through to the reader as clearly as possible, while retaining as much of the author’s style—his or her particular manner of expression, which can vary greatly from writer to writer.

Editors can employ any one of several levels or degrees of editing, as the job at hand or the terms of engagement may require: heavy, moderate, and light. Heavy editing means not even dealing with the text line by line or sentence by sentence, but by paragraphs and pages, thoroughly rewriting whole sections if clarity so demands. Moderate editing takes place at the sentence level—rewording this and that, putting this clause before that one, smoothing transitions and strengthening connections between paragraphs and topic shifts, making sure that the punctuation is perfect, and so on. Light editing might be little more than proofreading—checking for typos and misspellings, supplying missing apostrophes, questioning and resolving a word choice here and there, italicizing book titles, etc.

Literary editing is an even more special job than journalistic or technical copyediting, because it involves and requires a finely developed sensitivity to at least two things: what the author intends, and what the reader (or that larger group of potential readers, the market) expects. Creative writing deals in rich and potent ambiguities, and the literary editor must know how to achieve a balance between efficient clarity and nuanced expression.

It’s not the editor’s role to tell the author what or how to write, but a savvy editor will point out potential problems to the author—problems of interpretation, of pitch, of considerations that will sometimes go far beyond the text.

If the author is a creator, the editor is a critic—indeed, the work’s very first critic—who interrogates the text. Depending on the quality of the text, the editing can be more difficult than the writing. And eventually you’re dealing not only with the text, but with the author, who can be even more intransigent than his or her hopelessly garbled copy. Many authors—especially Filipino authors, who have had little or no previous experience with good editors—think very highly of themselves and their writing prowess, and resist the editor’s ministrations, no matter how positive and helpful they may be.

When I take on an editing job, I make it clear from the outset that while I will do everything I can to be sensitive to the client’s wants and temperament, I will literally have the final word as far as grammar and style are concerned. (I often choose to become an editor when I don’t have the time or the inclination to write the text myself; I advise prospective clients that they’ll save some time and money by getting a junior writer to prepare the draft, then getting me on board as an editor to do the final styling.) I ask people to trust me with what I’ve been trained to do, the same way I trust my editors with my copy.

In editorial mode, I’ve sometimes asked clients if they really want to come out with something they said that, in my best judgment, they might later regret, or might cause them unnecessary trouble. Sometimes people use books to settle old scores, and while there’s nothing intrinsically wrong with candor—and every truth or even half-truth contributes to historical discourse—I have to keep the client’s strategic interests in mind, and at least advise him or her of the possible pitfalls ahead. An editor can choose to play the independent and even adversarial critic, and every job needs a bit of that; but you can be sympathetic without being easy, or hard without being harsh, and I’ve found that that’s the best and fastest way to get solid work done, with a minimum of fuss and without leaving a bloody trail of crushed egos.

What do you need to become a good editor? Many editors begin and may still work on the side as writers, but paradoxically, some if not many editors may not be good writers—especially creative writers—at all. But at the very least, you need a near-impeccable command of the language, a sharp eye for detail, self-assurance, guts, and the desire and the drive to shape language to perfection.