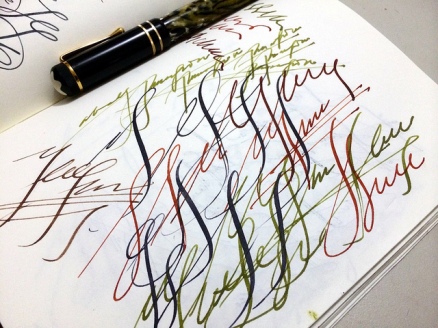 YOU’LL UNDERSTAND if I’m mighty proud of my fountain pen collection, built up painstakingly over the past 30 years. Now numbering about 200, it contains some of the world’s rarest and most desirable vintage and modern pens, and I’m still upgrading it, bringing down the numbers while raising the quality, hoping to downsize it to about 30 of the very best that I can pass on to our daughter Demi not too long from now.

At least that’s the press release. What I’m not saying, and what I’m not too proud of, is how awful my penmanship is, a trail of chicken tracks worthy at best of a Bic ballpoint. We have members in our fountain pen club like advertising executive Leigh Reyes and designer Fozzy Dayrit who can carve out whole new careers as professional calligraphers should they want to, so artfully do they put nib to paper. Oafs like me just wear our pens like others might sport brooches and hats, as body décor to look more substantial and interesting, especially as our other charms wane with age.

The fact is, I can’t write more than half a page of anything with a fountain pen before my fingers start crimping with fatigue, more accustomed as they’ve become to tapping on a keyboard with whispery ease. The saddest part of the story is, the only time my fountain pens get any real exercise is when, joylessly, I have to write out checks to pay for the credit cards and the utility bills.

It’s not as if fountain pens are alien, certainly not to me. We used them as grade-school kids in La Salle, where we also wrote loopy letters for Penmanship class, and where an inkstain on one’s shirtfront was just a blue badge of honor (or so I told myself, to mitigate the embarrassment). But as the world has since moved from writing in cursive to block letters, and from the pen to the computer, our writing muscles have atrophied, and the feathery Fs and coily Qs that garnished our forebears’ documents are a barely legible memory.

So how do I derive pleasure from my pens beyond the sheer, avaricious thrill of ownership? When the day comes to cart away my papers and my trash, they’ll find stacks of well-used notepads in my drawers and cabinets, and the nosy rummager might well imagine discovering some private snippets, or passages from an unfinished novel, among my scribbles. I hate to disappoint the snoops, but they’ll find nothing of the sort; instead, all they’ll come across will be a trail of doodles—page after page of doodles in every color of ink and width of nib. And that’s going to be the big dark secret out of my bag: I buy fancy pens not to craft great literature with, but just to doodle all day, wasting time, ink, and paper on nothing grander than the pursuit of pointless happiness.

My dictionary defines “doodle” as “To draw or sketch aimlessly, especially when preoccupied,” which isn’t too far from Wikipedia’s take on it, which sees a doodle as “a drawing made while a person’s attention is otherwise occupied.”

Here we see that the key idea behind doodling is distraction: you’re thinking about something but don’t really want to think about it, so you do something else, and if there’s a pen in your hand, that pen will have a mind of itself and start making squares and circles and lines that lead nowhere and everywhere. In my case, I know exactly what it is I’m running away from: work! I’m so drowning in book projects that I have no proper business doing anything else—not even writing a column like this—but it’s when things get tough that the doodles get going.

I’m sure that psychologists have a perfect explanation for this, but I’m convinced that there’s a symbiotic relationship between work and distraction, and that doodling actually helps me get my work done by letting me relax while my brain processes headache-inducing conundra like “How can we pass an anti-dynasty bill when 14 out of our 24 senators belong to a dynasty?” You’ll agree that it’s more fun to deal with questions like “Hmm, should I go with the Rohrer & Klingner Sepia in the Montblanc Oscar Wilde or the Diamine Oxblood in the Parker Vacumatic? Heck, let’s do both!”

To some others, doodles are more serious business—or at least halfway-serious, as the Google Doodles illustrate. You may not have heard of them as such, but you’ve surely seen them if you’ve ever used Google, because they’re the quirky, funny, topical drawings that periodically festoon the Google landing page to mark an anniversary, a birthday, or some other cause for celebration.

Googling around, I discovered that there’s actually something called the Doodle Arts Magazine (www.doodleartsmagazine.com), which happens to be Philippine-based. The people behind the website organized Doodle Fest 2015 a few months ago, and you can still catch the artwork online. If you want to see how good doodle art can get all around the world, have a look at http://www.creativebloq.com/illustration/doodle-art-912775.

Me, I’m happy with my squiggles and X’es and endless iterations of “This is a 1928 Duofold” and “This is a Sheaffer Balance” and “This is Carlo Collodi ink” and “This is a fine pen.” Maybe if I wrote something more sensible like “I come from a country without snow and without raspberries,” I could get another novel going and done in no time, but that sounds too much like real work, which apparently was never what these glorious pens and inks were meant to do. 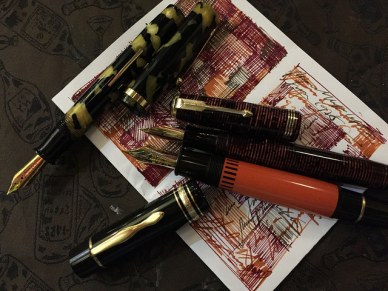