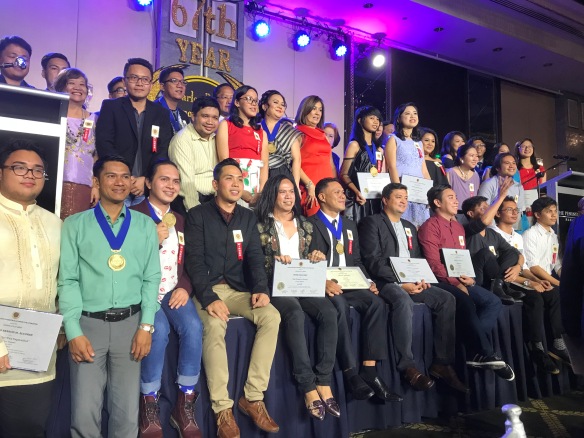 I WAS much honored to be the guest speaker last Friday at the 67th annual Carlos Palanca Memorial Awards for Literature, so I’ll share my talk with my Penman readers this week and next:

First of all, I’d like to thank the Palanca Foundation and family for this tremendous honor, which I honestly never expected to receive. For about forty years, I have been watching and listening to many very distinguished people at this podium explicating on literature and society—and you will forgive my bias if I say that the writers were usually more memorable than the politicians—but I never imagined myself to be in their exalted position.

Indeed I have been fortunate enough to join the Palanca Hall of Fame, but I am no literary genius or philosophizer. I have always introduced myself as a Swiss Army Knife of writing, a practitioner and professional who has made a living of his words. I was already working as a newspaper reporter at 18, before I won my first Palanca; I was a journalist beholden to the facts before I was liberated by fiction.

Tonight I will address myself mainly to the first-time winners in this audience, to those who entered the Rigodon Ballroom with an extra spring in their step and a sparkle in their eyes, with their parents or partners in tow.

I can tell you now that you will never forget this evening, as I have never forgotten my own introduction to this very special society of peers and comrades. It was on this day in 1975 that I won my first Palanca, a share of second prize for a short story in English. The awarding was held on the top floor of the company building in what used to be Echague—now, of course, Carlos Palanca Street—in Manila.

It was a little less opulent than this ballroom, but to that 21-year-old winning a prize the first time he joined, it might as well have been heaven, nirvana, and Camelot all rolled into one. I knew no one, and no one knew me, and I could only watch from afar as celebrated writers like Krip Yuson—who shared first prize in my category with Leo Deriada—regaled each other, likely with stories of their latest exploits in Ermita.

I still have my certificate from that ceremony: an elaborately hand-lettered work of art larger than a college diploma. Since I had dropped out in my freshman year and was working in a government office under martial law, I treasured that certificate as if it were my diploma, and had it framed. I’m told that the calligrapher who crafted those certificates has passed away, but his strokes remain indelible in my memory.

With my prize money of a couple of thousand pesos, plus some savings, I bought my first car—which tells you what kind of car it was: a canary-yellow 1963 Datsun Bluebird, battered but bright, into rehabilitating which I would throw many more years of good money after bad and not get even one day’s worth of driving, before my mechanic finally ran away with it. Years later I would get a call from the Quezon City police to inform me that they had impounded a yellow Bluebird registered in my name, and I could have it back if I paid the fee. I went over to take a look—the car’s tires were all flat, and it was riddled with bullet holes. I muttered an oath and a prayer and left it there.

So that’s what happened with my first Palanca prize, and one of these days if I turn that into a short story I might get some of my money back. But the most grievous consequence of that first victory was the fact that, for the next four years, I lost. I turned in entry after entry, and kept losing and losing. Considering who was winning—the likes of Gregorio Brillantes and F. Sionil Jose—I shouldn’t have been surprised, but I had to fight back the growing fear that my first Palanca was a joke.

In 1980 I won again, and soon hit my stride. It took 20 more years to enter the Hall of Fame, by which time I had published ten books, gone back to college, and begun another career as a teacher. I never joined the Palancas again, except to be an occasional judge, but I have come to these awarding ceremonies as often as I could, eager to witness the annual emergence of new literary talent.

I give you this overview of my long relationship with these awards to bring us to the subject proper of my brief talk this evening, “What This Prize Should Mean to You.” The quick and correct response, of course, is to say that a Palanca award will bring you honor, some fame—certainly bragging rights for your proud mama and papa—and even some money, if not for a car then for a weekend in Boracay or a new phone or laptop to replace the old one.

You will be walking on air for a couple of weeks, until the novelty wears off, the money is spent, and you return to the humdrum of teaching, call-centering, Uber-driving, or whatever it is keeps you and your family alive. You will discover that, to most people, your literary genius makes no difference and no sense. You will begin to wonder, as I did, if it was all a fleeting illusion.

Some of you will fall by the wayside, but most of you will press on, like we did, wanting this Cinderella moment to repeat itself year after year. It will not always happen, and you will learn to take your losses as well as your triumphs—those years I kept joining and losing became my real education—but if you keep at it, you will reach the point when the winning will matter less than the writing. That, I think, will be your greatest victory, the realization that these awards are but an enabler, a handmaiden of books that will be validated no longer by a panel of three judges but by a readership of thousands.