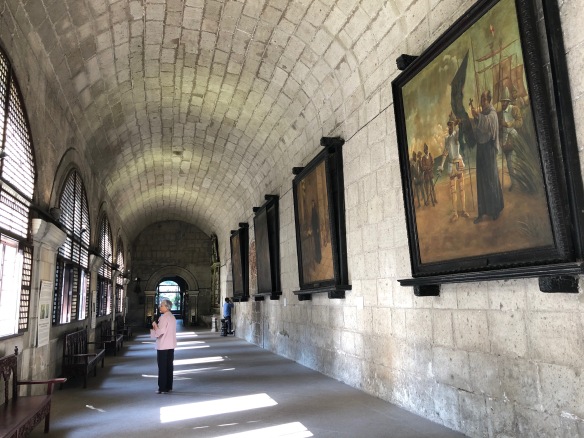 IF YOU ever find yourself with a free morning or afternoon in Manila, with some loose change in your pocket and a bee buzzing in your head about what to do, think no further and just do as I say: get thee to the San Agustin Museum in Intramuros. Your P200 (or even less, with concessions for seniors and students) will never be spent better, certainly not for a movie at the mall.

I hadn’t been to that museum in over 20 years; the last time I visited, it was a dark and gloomy place, as you might expect a 400-year-old institution to be. The museum is attached to the church of the same name, which was completed in stone in 1607 after two earlier and flimsier incarnations were destroyed by fire in 1574 and 1583. The Augustinians were inspired and industrious church builders—the corridors of the museum are lined with paintings of their glorious creations throughout the archipelago—and San Agustin Church itself remains the splendorous anchor of that evangelical effort.

The church has become a favorite choice for weddings, and indeed it was for the wedding of a friend that Beng and I went to San Agustin a few weeks ago. We got there an hour early, so we stepped into the foyer of the museum, and decided to while away the time viewing the exhibits. And what a feast for the eye and spirit that turned out to be. 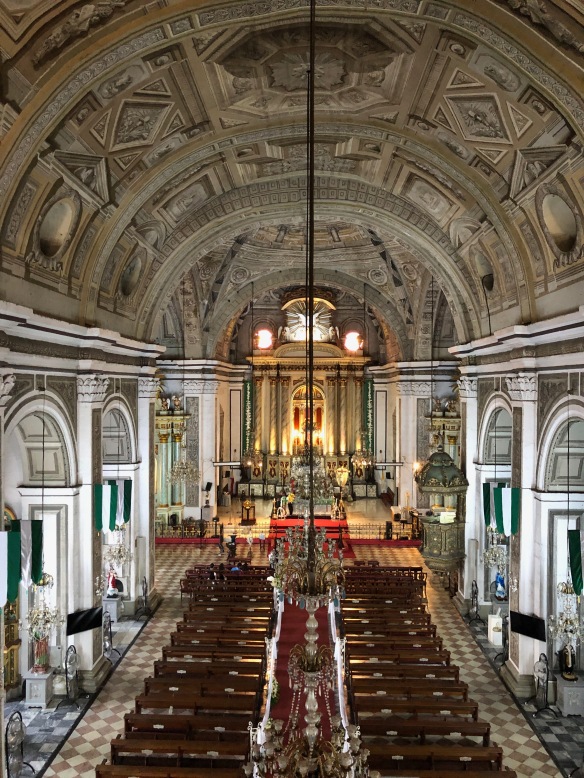 The museum is organized along six basic themes that circumscribe Augustinian life: Love for Songs, Love for Prayer, Love for Music, Love for Wisdom, Love for Science, and Love for Culture. 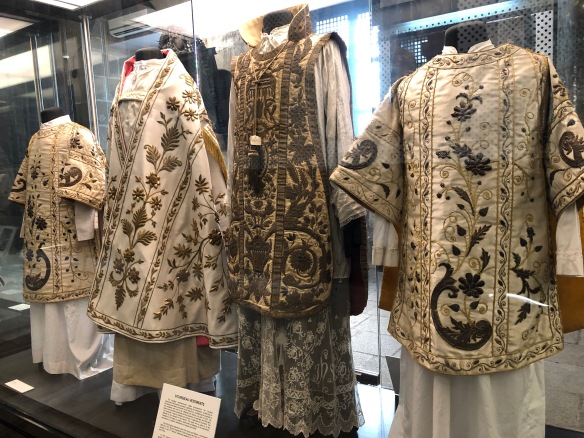 Love for Songs speaks of the order’s devotion to liturgical music, embodied in the old choir books, many still on parchment, that were used in the church’s famous and now accessible choir loft, from where the visitor can appreciate the church’s full majesty under the towering organ. 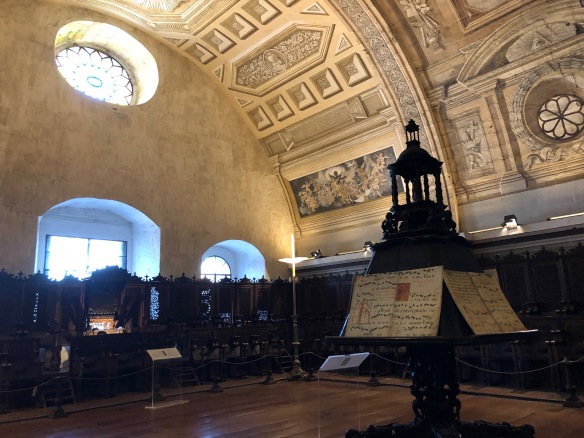 Love for Prayer describes the community’s gathering five times a day for prayer in that loft or coro, seated in intricately carved silleriaor choir stalls that go back to the early 1600s. The space is dominated by the lectern and organ. A tip for the visitor: peek behind the organ for a glimpse of the original colors of the place, preserved in the masonry.

Love for Music is a special exhibition of musical instruments employed for church services, highlighting the work of two important masters, the composer and organist Fr. Manuel Arostegui and musical director Marcel Adonay. 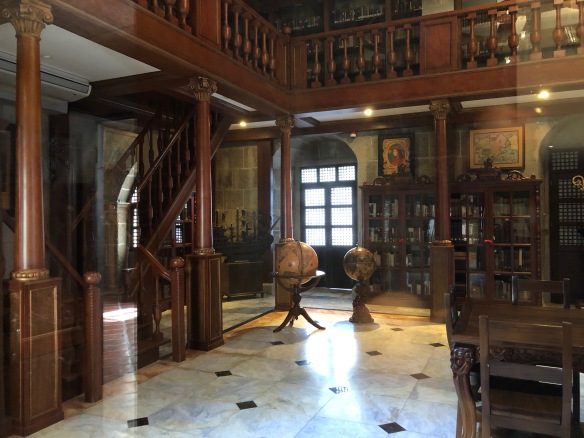 Love for Wisdom brings us to the order’s library which, despite the ravages of war—many thousands of volumes were lost to Manila’s sacking by the British and then to the city’s bombardment in the Second World War—still displays books dating back to the 1500s, proof of the Augustinian devotion to scholarship (particularly to linguistics, based on the exhibits). Being something of an antiquarian, this was of the greatest interest to me (I noted with some amusement that the oldest book in the room was said to have been published in 1552—one year younger than the oldest in my personal collection), but unfortunately the library as a whole can be seen only through a glass wall, perhaps to protect its precious contents. 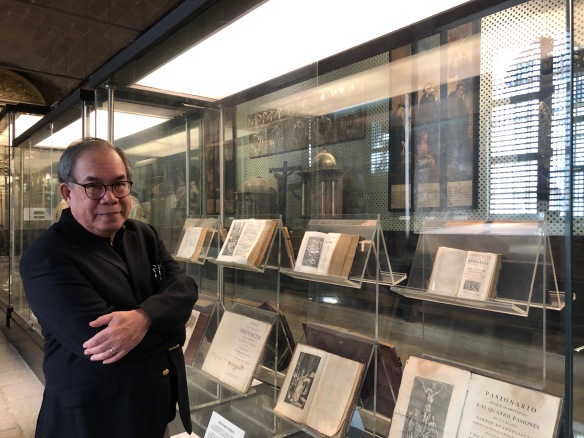 Love for Science brings us to the work of the pioneering botanist Fr. Manuel Blanco, alongside that of two other Augustinian scientists, Fr. Ignacio Mercado and Fr. Antonio Llanos. It was, of course, Fr. Blanco’s Flora de Filipinasthat put the Philippines’ horticultural wealth on the global map, and the book’s illustrated 3rd edition (since reproduced) remains among the most coveted of Philippine publications. 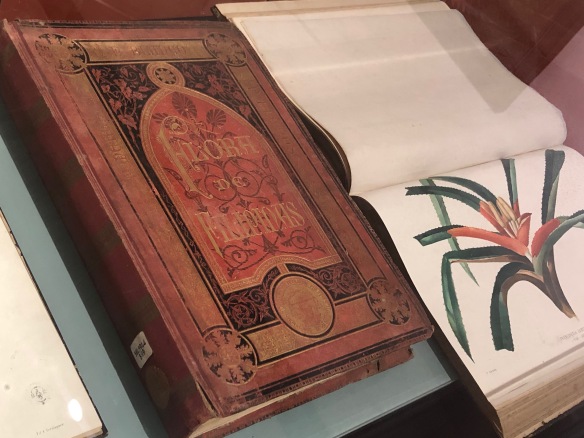 Finally, Love for Culture dwells on the Augustinian mission in education, starting with their first school in Cebu in 1565.

In a larger sense, that educational mission continues with the museum itself and what it offers the modern visitor—people like us who, immersed in the business and digital traffic of the 21stcentury, step into a time tunnel to be magically transported into a past materially composed of gold, ivory, parchment, and wood. Indeed, as we did, the best way to appreciate this museum is simply to walk through it, without too much thought to system or design, allowing the objects—whether they be glass-eyed Madonnas, gold-threaded priestly vestments, or the gravestone of Juan Luna y Novicio—to speak to you. I’m not even a particularly religious person—I’ve long had issues with the Church, despite my deep respect for its core intentions—but this exposure to specific aspects of the Augustinian mission in the Philippines strangely reassures me that good things survive.

Endowed by the likes of the late Don Luis Ma. Araneta, the museum has been very capably maintained and is well lit, and its two stories of exhibits, plus Father Blanco’s Garden, offer the visitor at least an hour of quiet wonderment—with an emphasis on “quiet,” an increasingly rare grace to be found in our frenetic city. Spare that hour and those 200 pesos; you will feel amply rewarded. 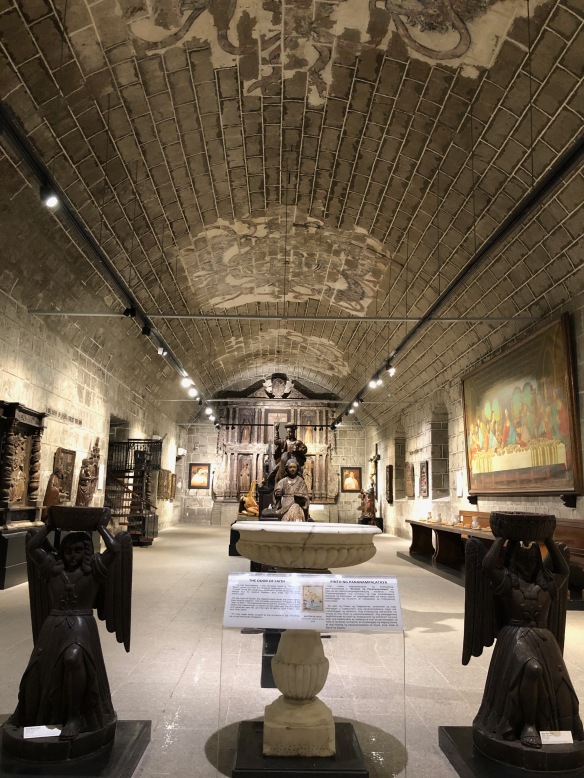