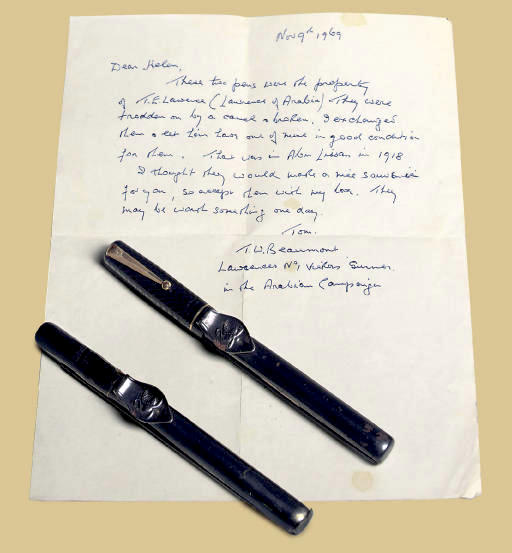 A FEW months ago, I wrote about the fountain pens that famous people like T. S. Eliot, Winston Churchill, and Neil Gaiman used, and especially about how Eliot’s pen had been donated by his widow Valerie to the Royal Society of Literature for members to sign themselves with into the society’s logbook. The more practical-minded will and should, of course, dismiss any such discussions of celebrity memorabilia as mere fetishism, an adoration of idle and otherwise meaningless objects.

Happily, that’s a charge I can live with, as an incorrigible collector of lovable old junk, particularly pens to which I’m drawn by some deep Freudian current I won’t even try to palpate. I never even excuse the fact that I collect pens not so much to write as to doodle with—I enjoy laying wet bright lines on a crisp sheet of paper and watching the ink spread and shade. Whatever words I may be forming really mean little; it’s the sheer pleasure of forming the words that matters for the moment, the joy of the first pictographer tracing the outline of a bull on a cave wall, of the medieval scribe illuminating the Book of Genesis.

Eliot and Co. weren’t collecting Watermans and Conway Stewarts, of course; they were putting them to work. In their time, everyone wielded a pen, from insurance executives like Wallace Stevens to ambulance drivers like Ernest Hemingway and Walt Disney. Soldiers carried pens with them to the trenches, using ink pellets they could dilute in water; today these wartime pens and their embedded pellets are highly prized.

I was thinking of just this scene last week when I came across a thread in a pen forum talking about the pen or pens that T. E. Lawrence—Lawrence of Arabia, immortalized by Peter O’Toole in the 1962 film epic—used in his desert campaigns. Lawrence was an indefatigable writer, and his Seven Pillars of Wisdom remains as interesting today as when he published it in 1922.

The forum discussion wasn’t really even about Lawrence’s pen but the ink he used; apparently, he preferred a special French-made ink, one that his pen could safely ingest and expel. India or carbon ink is fine for drawing but is usually too thick for use with conventional fountain pens, whose feeds or ink channels it will clog. A forum member (many thanks to “carlos.q” from Puerto Rico) had dug up a typewritten letter from Lawrence, who was back in Southampton, dated May 3, 1934 and addressed to a friend initialed “FV”. In it, he complains (note his curious abuse of the colon) that “I apologize for the ink. The only carbon ink that will run in a fountain pen is Bourgeois: and that is sold only by Reeve in the bottom of Charing Cross Road. I have emptied my bottle of all but the too-thick dregs: I cannot demand more by post: but as soon as the R.A.F. will pay my expenses to London for a working day I shall go to the shop and buy some, and again charge the excellent pen. Only carbon ink is ink—that I wholly agree. I badly want to reach London again, but cannot afford a private visit.” (It’s sad enough to see this proud man in such dire straits, but sadder still to know that he would be dead in a year, from a motorcycle spill.)

Lawrence’s pen—two of them, actually, a Swan and a Conway Stewart—would turn up in a Christie’s auction in 2007, realizing over $5,000. The pens were accompanied by a 1969 letter from a Lawrence associate establishing their provenance, which noted that they had both been “trodden on by a camel & broken,” although this likely applied only to the Swan, as the Conway Stewart pictured had been made much later than Lawrence’s camel-riding days. The letter does end, presciently: “They may be worth something one day.”

That’s something we all wish we could say for our possessions, hopefully without requiring the chunky foot of a roving dromedary to enhance their narrative value. Having just stepped into the gray zone of seniorhood, I often wonder what will become of my trove of mostly vintage Parkers, Sheaffers, Montblancs, Pelikans and what-not once I sign my last signature. They’ll be worth something, for sure, but all of them put together might not even be enough to trade up for a Rolex, so it isn’t their bankable value I’m thinking about, but the stories they carry, especially the dozen or so in my daily rotation: “This one I got from the Thistle Pen Shop in Edinburgh, and it led to a story that became a book; this one I found in the Greenhills tiangge, selling for a tiny fraction of its actual worth; this one was being sold by a shop in Auckland, but it was missing a tiny part, a tassie which I later found online at the Berliner shop in New York; this one I found in an antique shop on Morato, inscribed to a ‘Consuelo,’ who would have worn it as a pendant on a chain….” And so on.

Last year I told myself that I would try to unload about a third of the collection, thinking to keep just the best dozen or so by the time I turn 70, but turning 60 gave me an excuse to acquire even more ink-spitting baubles. How to say no to a half-priced Montblanc Oscar Wilde, the flamboyant companion to my black-and-formal Agatha Christie? Or the Onoto Magna Classic in mottled tortoiseshell, its golden tongue spinning tales in a summery green-gold (known to ink connoisseurs as Rohrer & Klingner Alt-Goldgrun)? Let me declare this here and now: camels are strictly forbidden from entering my barangay in UP Diliman; any large humpbacked mammal coming within a hundred meters of my house will be shot on sight (with liberal squirts of india ink). 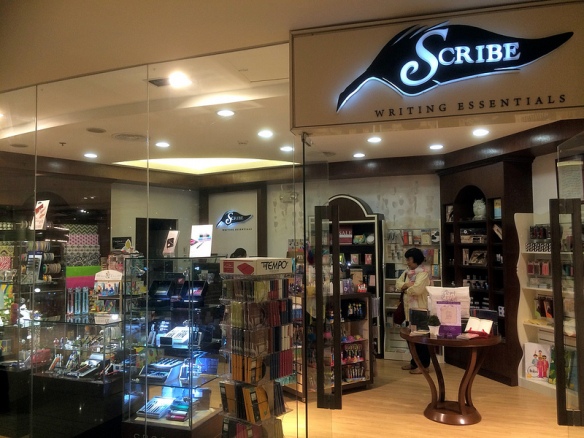 Now, if all this talk of bygone pen-mongering strikes a responsive chord in you—evoking the inner Lawrence or the inner Agatha (Christie tracked Lawrence’s footsteps in Syria, intrigued by his spying)—you might want to pay a visit to the newest pen palace in town, a veritable emporium of pens, papers, inks, and even wax seals.

The members of our local (and still growing on its sixth year!) pen club, the Fountain Pen Network-Philippines, were a captive crowd at the recent launch of Scribe’s new flagship store at the East Wing of Shangri-La Plaza Mall. Scribe’s owner, the lovely and gracious Marian Yu-Ong, recalled how the business began in 2002 as an importer of writing and reading products, before opening its first store in Eastwood Mall in 2009. Also featured at the launch were the works of three master calligraphers whom Scribe has designated its ambassadors: hand-lettering maven Fozzy Dayrit, advertising executive Leigh Reyes, and architect-conservator Mico Manalo.

Today, if you want to feast your eyes on the largest and most sumptuous range of quality pens, papers, and inks in Metro Manila, there’s really no other place to go but Scribe Writing Essentials—make that “places,” because aside from Shang and Eastwood, Scribe can also be found at Glorietta 5, SM Aura Premier, and SM Megamall Fashion Hall.

I paid a visit to Scribe’s new flagship store after the launch, and was impressed to find an assortment of quality pens that we used to have to order online or fly to Hong Kong, KL, or Singapore for, and at very competitive prices, brands like Pelikan, Sailor, Platinum, Kaweco, and TWSBI, as well as the more familiar Cross and Lamy.

Here’s my standing advice to fountain-pen newbies, faced with these choices: if you want one good, classic pen you can expect to use for the next ten years, invest in a Pelikan; if you want a good, well-designed pen with a great nib for a price that won’t break the bank, try the Taiwan-made TWSBI (twis-bee), a huge hit among pen aficionados. Then treat yourself to a bottle of J. Herbin ink and a Midori notebook, and before long you’ll be scanning the horizon for wayward camels.