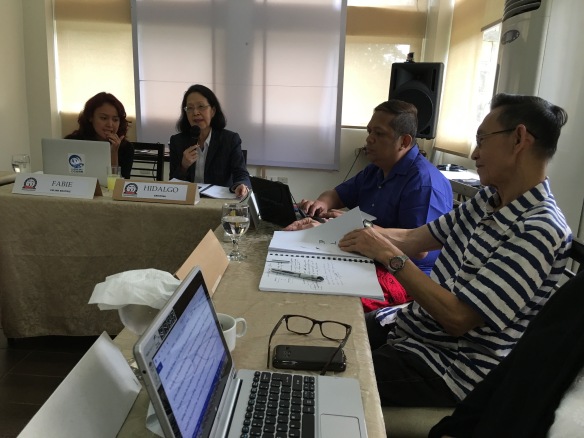 AS I noted last Monday, this year’s UP National Writers Workshop—which we held from May 22 to 29 on Mt. Makiling in Laguna—was one of our best in recent years, with a new batch of vibrant literary talents emerging to stake their claim on our attention.

Aside from the three women writers I mentioned last week—Elena Paulma, Mina Esguerra, and Celine Fabie—we had nine other fellows presenting fine, exciting work: new projects in various stages of completion, submitted for review and comment by their peers and seniors for possible improvements in both design and execution. These works were accompanied by a brief presentation of the writers’ “poetics”—their own appreciation of how and why they write what they write. While very few outside the workshop will ever get to read them, those poetics are often gems of creative insight, a rare look into the minds of writers trying to understand their own process of writing.

Poet Vijae Alquisola, for example, grounds his collection titled “Paglasa sa Pansamantala” (which I’ll loosely translate as “Savoring the Temporary”) on painful personal experience (and here again I’ll translate what he wrote, as I will other texts in Filipino): “Temporary was the answer my siblings and I held on to over the long stay overseas of our mother. Even if I didn’t know how many nights of sleep or days of waking temporary meant—and even if it was never clear what stretch of months or days it occupied on the calendar—we had no choice but to accept it. She had to go to Hong Kong to feed us. She had to leave so we could live, just for the time being.”

Novelist RM Topacio Aplaon (Topograpiya ng Lumbay, The Topography of Loneliness): “I feel liberated by the very act of writing because this is the only place where I can be true to myself, the only way I can freely say anything I want, can do anything I may have no right to do in real life, can chronicle moments I wish never to forget: place, feeling, image, sensibility.”

Poet Vincent A. Dioquino (“we never understood proximity”): “Language is that space where the imagined thrives, where the imagined is held closer to the body, saying what the body cannot speak of. It is that consciousness by which feeling and thought are evoked, a mediation from the abstract to the more concrete., or from a plurality of concrete and particular objects (that is to say: texts, or a set of inscriptions aspiring towards the textual). Language is being made immanent and tangible, threatened with decipherment. It is this specific occurrence of language that is rendered visible and visceral in poetry.”

Poet Francisco Arias Montesena (“Iluminado”): “I write poetry as a part of my being, as an attempt at things I cannot achieve in reality. Often I have to find time and space for poetry in the midst of my work as a teacher, but I have to do myself this favor, knowing that I have to share what I have, even if I have much to learn, despite my shortcomings. How can we begin to fill this need if we cannot mine words for love?”

Novelist Rolly Rude Ortega (Rajah Muda): “I write the stories that I want to read, and I want to read more stories about the Moros, specifically the Maguindanaos, and the lumads, specifically the Dulangan Manobos. The Ilonggos of Mindanao, the Maguindanaos, and the Dulangan Manobos are all significant to me because these people had been part of my life even before I decided to become a writer. Growing up in Kulaman Plateau, I saw firsthand that while the Ilonggos and other Christian tribes were poor, the Manobos were poorer still, which should not have been the case, for they had been living in the resource-rich land long before the migrants came.”

Writer for children Cheeno Marlo Sayuno (“Super Boyong Wears a Malong”): “I love writing for children and (writing about) culture. I would like to share with the children the beauty of our cultural heritage. While the advent of modernization is nothing but inevitable and even if cultures change and evolve, I want the children to still see the colorful costumes, dances, and songs from the past, hoping that it would help in developing a sense of nationalism and appreciation for Indigenous communities.”

Poet Melecio F. Turao (“The Antimodel”): “I have a soft spot for the outsider, for things on the periphery, the ignored, the unrecognized. In my silent heroic moments, I tell myself that I champion the cause of second fiddles. I remember that Cirilo Bautista gave up writing poetry in 2000, saying we live in a prosaic world. I tend to agree so far as our predictable lives go. But a poet should be able to see through appearances. So I pushed myself to try to understand what compels me to write. And it hit me that I would have been a good student of psychology or cognitive science because I amplify awkwardness, alienation, resentment, loathing, desire and failure. I trivialize the hypocritically serious and structured. Thus, The Antimodel.”

Playwright Visconde Carlo Vergara (“Hula Hoop”): “Since I work in comics and plays, writing description isn’t my strongest suit, but people have complimented me on how natural my dialogue sounds, or reads. This I credit to being used to listening and mirroring, ever since I was a kid, as well as having that stint as a theatre actor in the nineties. I would write my drafts purely in dialogue, and simply imagine what it would look like when played out. In acting out the play in my mind, I would also do the acting myself by reading the dialogue out loud in the personalities of every character, just to test if the words rolled off the tongue well enough, and if the sentences had good rhythm.”

Poet Enrique S. Villasis (“Manansala”): “A solution I saw (for the collection) was to bring the poems closer to the times when the paintings were executed. As historical artifacts, Manansala’s many-layered lights and colors could be seen as signifiers of the disturbances, dangers, sufferings, dreams, and desires of his age. This collection is my attempt as a poet to explore the relationship between an artwork and its period, as well as an attempt of the poet to assume the mask of a critic, historian, and curator.”

It was a pleasure and a challenge taking up these writers on their given premises and seeing how closely their grasp matched their reach. (And it was no huge problem if they didn’t: in a workshop, everything is negotiable, even one’s original design, although no one is under duress to accept alternative suggestions.)

I’d like to thank my fellow panelists—National Artists Bien Lumbera and Virgilio Almario, and fellow UP professors and faculty members Jimmy Abad, Jing Hidalgo, Neil Garcia, Vim Nadera, Jun Cruz Reyes, Luna Sicat, Eugene Evasco, Issy Reyes, and Vlad Gonzales—our hosts at UP Los Baños, the National Arts Center, and the BP International Hotel, and of course the UP Diliman and UP System administration for another worthwhile effort at enriching the future of Philippine literature.