WITH WORK piling up at the office, I’ve increasingly been looking forward to weekends, especially Saturdays, for some fun and leisure. Weeks ahead, I start scouting the cultural horizon for interesting things to do or shows to attend. A few Saturdays ago, for example, Beng and I drove out to Makati to explore the Istorya Vintage Fair at Warehouse Eight—a totally engrossing event that merits its own write-up, which I’ll do in a forthcoming column—before rushing back to Diliman to catch the Ihudyat! marching band competition at the UP Amphitheater.

It was the following Saturday that I’ll write about first, afraid that I might forget some important detail if I wait too long. Indeed, “forget” is the operative word here, because it describes what most people did to our destination: the Boix House (also known as the Teotico-Crespo House) on Ariston Bautista Street in Quiapo, Manila. I tagged along with a posse of UP Fine Arts alumni that included Romy Carlos, Boysie Villavicencio, Ernie Canlas, and Beng—a group that had heard about the house and were interested in seeing if and how they could help in its restoration, perhaps through a benefit art exhibit. (I was delighted to learn later that an old friend, the art dealer and patron Jack Teotico, is a direct descendant of the original house owner and will be pitching in.)

Located in what has become Quiapo’s Muslim quarter, the Boix House is so named because it was acquired by the Boix-Tarradellas family from the Crespos, who got it in turn from the Teoticos. Don Marciano Teotico had the Neo-Renaissance house built in 1895 on what was then Calle Barbosa, and it soon attracted student boarders like the young Manuel Luis Quezon, who reputedly went out partying next door. There, two decades after Don Marciano built his brood a home, would rise the better known and more fortunate Nakpil-Bautista House.

We don’t know what happened next, but at some point, the ownership of the house reportedly passed on to the Society of Jesus, and we lose track of the Boix connection except through the house and what’s been put on the Internet about it—if any reader knows any more, please do share. (I’ve also been wondering about how exactly “Boix” is pronounced; I initially defaulted to the French bwah, but online sources suggest a Spanish or Catalan origin, in which case it would be boish—but then again, what do I know?)

The sad part of this story is how decrepit the Boix House has become, despite the noble efforts of well-meaning organizations such as the Kapitbahayan sa Kalye Bautista to save the house through crowdfunding. Even the World Monuments Fund has taken note of and extended some assistance to the Boix House project (https://www.wmf.org/project/boix-house).

If you pay it a visit like we did, you’ll see why it could use all the help it can get. Just getting across the threshold to the stairs takes—almost literally—a leap of faith: two old doors now serve as creaky planks over which you cross a puddle of water. The wooden stairs and floor are thickly coated with dust and grime; a rat’s carcass molders away in a corner like a forgotten lab specimen. Framed panels provide a history of the house, and tattered flags and ribbons offer proof of some earlier appeals to patriotic fervor. Overall, one’s impression is a commingling of beauty and sadness, the passage not only of time but of care. 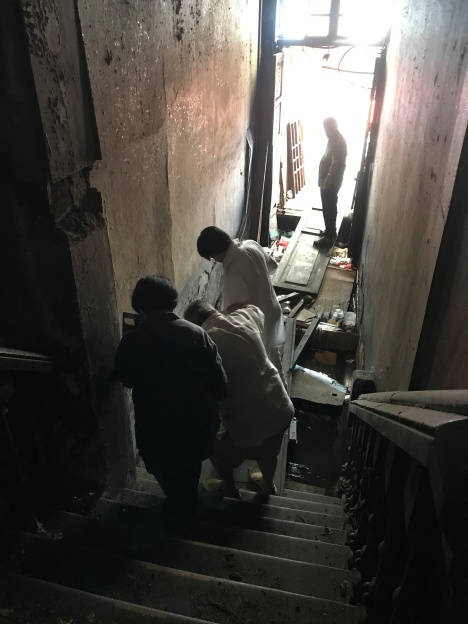 One thing you couldn’t avoid noticing was the fact that while the second floor seemed eerily vacant, it was an entirely different story belowdecks, with the visual evidence of many families crammed into every habitable inch. The undisturbed dust and the odd debris upstairs suggested that the people left that space alone, most of the time, despite the absence of any kind of barrier or restriction. Why? Ghosts? A deep-seated respect of the departed?

What’s clear is that no restoration project will succeed without taking the house’s present occupants—and indeed the whole neighborhood—into account. Even if you manage to raise the many millions required to return the house to its old glory, its antique opulence will stand in ironic contrast to the very present and very real poverty blighting its surroundings.

The well-preserved Nakpil-Bautista House next door might yield some clues—but not all—to what to do eventually. This ancestral home had seen generations of such notables as the composer Julio Nakpil and his wife Gregoria de Jesus, Andres Bonifacio’s widow. Still maintained by the family and open to public viewing, the house has also served as a home and studio for the past 38 years for master carver Ner Manlaqui, whose religious statues crowd the basement. Priests, churches, and other patrons keep Mang Ner busy, as the half-finished saints and virgins being worked on by his assistants attest to, employing trunks of pale yellow baticulin sourced from faraway Quezon.

So preserving or reviving the past might necessitate providing for the present, and the cultural activists behind the Boix House project will do well to temper their admirable passion with some dry-eyed pragmatism. Houses are always more than wood and stone, and bringing old ones back to life should also mean ensuring a sustainable future for the people who live in and around them.

I couldn’t have imagined a richer Saturday morning but yet also a more poignant one, spent in the crumbling heart of the city.