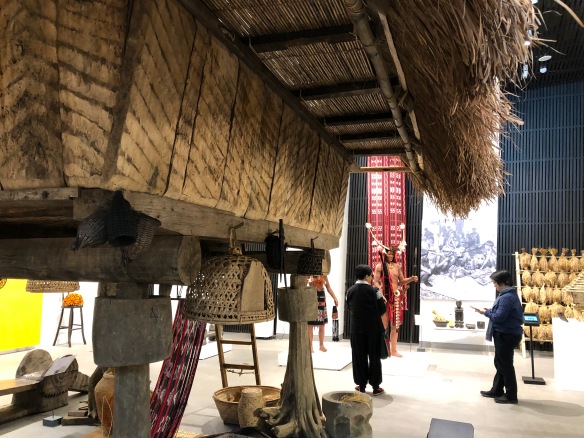 SOMETIME LAST year, I reported on the opening of the new Museo Kordilyera at the University of the Philippines Baguio (UPB), and predicted that it was going to become one of the new “must-sees” for the culturally savvy Baguio visitor, alongside such landmarks as the Bencab Museum. I was back there last week to help inaugurate a new theater and enjoy a concert—about which you’ll hear more in a bit—but what sealed UPB’s reputation for me as that region’s cultural beacon was its new exhibit titled “Feasts of Merit” which opened last month and which will run all year long.

As UPB Professor Emeritus Delfin Tolentino explains it, the title refers to the “prestige feasts” sponsored by the well-off families of traditional societies around Asia and in the Philippine north, such as by the Ifugao, Bontok, and Ibaloy. In these feasts—now long gone, for obvious reasons—hundreds of pigs and carabaos would be slaughtered in a show of affluence—indeed, in what could be seen as a deliberate exercise in excess, as Museo director Dr. Analyn “Ikin” Salvador-Amores acknowledges. But alongside this excess was the idea that wealth was meaningless if it could not be shared with others, so the point of the feast was to have the community partake of it, thereby strengthening the ties between and among the people. 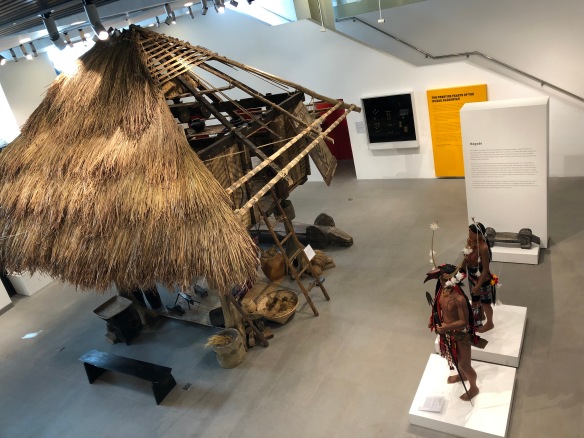 To liven up the scene, the Museo purchased (with sponsorships), dismantled, transported, and reassembled a complete traditional Ifugao house or baleh which now forms the centerpiece of the exhibit. The 50-year-old house took four days to put back together, says Ikin, employing no nails. Walking around and beneath it gives the visitor an intimate sense of family and village life—as well as of the ingenuity of the native architect, in such touches as the rat guards circling every post, preventing rodents and other pests from clambering up into the house proper.

The baleh may be the most arresting feature of the exhibit, but equally fascinating are the large-scale reproductions of vintage photographs lining the walls, chronicling a lost way of life in the highlands, from Bontok women threshing rice together to other women wearing golden mouth guards to display their wealth (or, as one of those women said, “to shut us up” because the men wore no such flashy encumbrances).

An especially fascinating corner of the museum houses its impressive collection of heirloom textiles, many sporting designs unseen and unwoven for many decades. As two of her assistants carefully folded and scanned some specimens to create digital files of their designs, Ikin unrolled a large swath of an indigo-dyed textile from the 1920s—still looking new and sharp—that she had found in Chicago, being sold by a Filipino, whom she had managed to persuade to sell the precious artifact.

Foreign sponsors and benefactors such as the Newberry Library in Chicago, the University of Michigan, and the Kunstkamera in St. Petersburg, Russia helped make the exhibit possible; local supporters like the National Artist Bencab have also generously lent or donated items from their extensive collections. Dr. Amores says the Museo would be very happy to receive more donations of choice items from private collections, and I can’t think of a more fitting recipient myself of such pieces than the Museo Kordilyera and its state-of-the-art facilities and curatorial services.

The Museo and its exhibits are part of a broader UPB program to revitalize its campus as a regional center for cultural awareness and research under Chancellor Ray Rovillos, who also happens to be a historian. With just a six-hectare footprint and a steeply sloping landscape to work with, Dr. Rovillos and his architect, the brilliantly adaptive Aris Go, have given UPB a smart new environment that goes beyond looks to include catchments for rainwater, among other innovations.

Thanks to the support of the cultural maven Sen. Loren Legarda, UPB also now has an impressive new theater, the Teatro Amianan, which was inaugurated last week with a concert, and the adjoining Darnay Demetillo Art Space.

The concert opened with some popular numbers by UPB’s homegrown Tinig Amianan, after which the audience was treated to a stellar performance by soprano Stephanie Quintin, a Baguio girl and UP graduate who has trained in Germany and Hong Kong. Stephanie presented a selection of vocal classics from Bach to Lizst and Gounod before wowing the crowd with Nicanor Abelardo’s “Bituing Marikit” and a rousing rendition of Jose Estella’s “Ang Maya.” She was very capably accompanied by the young pianist Gabriel Paguirigan, who’s still in school at the UP College of Music after graduating from the Philippine High School for the Arts, but who has already won a slew of awards.

It may be quite a stretch from Bach to the baleh, but it’s precisely the kind of imaginative leap from the tribal to the global that Baguio has always been known for, and as a UP official myself, I felt immensely proud to see UPB on top of the effort. Bravo!