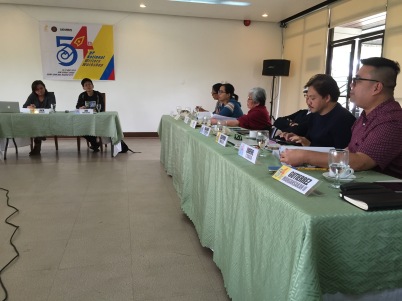 BECAUSE OF my trip to Canada, I was able to attend only one day of this year’s UP National Writers Workshop, which took place from May 10 to 17 in Baguio. I immediately went to work that morning leading a discussion of a biographical project submitted by one of the twelve fellows.

It was a topic I was keenly interested in, because of my own work in biographical writing. (Two of my biographies—A Man Called Tet: The Story of Enrique T. Garcia, Jr. and Edgardo J. Angara: In the Grand Manner—were published and launched recently by Anvil Publishing and the University of the Philippines Press, respectively.) I’m at work on a few more, and if it becomes my lot to be known primarily for my accounts of other people’s lives than for my own fiction, then I can’t complain, having assumed a rather unique responsibility and occupation, among a few others in our writing community.

As a grade-schooler, I devoured biographies in the library, finding that the lives of successful or significant people—whether here or in faraway lands—inspired me to try harder and do more in my own difficult existence. I especially enjoyed the life stories of scientists, explorers, soldiers, artists, and heroes. Of course, these elementary editions were highly simplified, and very likely glossed over the human imperfections—sometimes gross—that these characters possessed, which more mature biographies would reveal if not revel in. No matter; at that time, the overarching greatness of their deeds lent a luminous aura to these characters’ profiles, and I have to believe that I emerged all the richer for reading those books.

The idealization of a life was one issue we discussed at the workshop. There are many kinds of biographies, and I took the occasion to go over a simple classification of these kinds.

On one extreme would be hagiography—literally, writing about saints, and therefore the sunny sanctification of the subject as though everything that he or she did were beyond reproach. On the dark end would be the hostile or malicious biography, written for no other reason than to malign its subject as indelibly as possible, even at the expense of the truth. To its left would be the critical biography—a sober, perhaps scholarly, and more even-handed study of a life, sparing nothing and no one (least of all the subject) in pursuit of the presumptive truth, although these works could also carry their own agenda.

Farther on would come the kind of work that I and some others do on commission, for which I’ve coined the term “sympathetic biography,” a largely positive presentation of a subject’s life—without skirting, however, the major controversies and issues publicly known to involve the subject. Is it the whole truth and nothing but the truth? Realistically, I would expect not, and not because I think my subjects deliberately lie to me, but because it’s in human nature to present the best side of oneself. (I think Dolphy set the bar for searing candor and self-awareness in his autobiography, Hindi Ko Ito Narating Mag-Isa; I can’t imagine politicians or business figures being so open about their private lives.)

A sympathetic biography may be a half-filled glass to many, but it puts something on the table to be seen and seen through. I expect—I would hope—that whatever I write about my subject will be interrogated by more knowledgeable critics and scholars. This is why I urge my clients to be as forthright as possible and to deal with whatever issues they may have been embroiled in, because we live in a highly skeptical environment where questions never cease, especially online.

But to get back to the workshop, we were glad to succeed in our continuing quest for the discovery and encouragement of bright new writing talent across the archipelago. The UP Writers Workshop is different from most others in that it engages mid-career writers—people of proven ability with at least one published book, or major stage or film production to their name. We deal with them less as students than as younger brothers and sisters in the profession.

The critics of writing programs and workshops who think that all they produce are clones and sound-alikes of those teaching these courses should take a look at our roster of fellows and their work. These young writers sound nothing like us, and even after the workshop, they’ll continue working with their own material in their own styles, because we instructors do our best to recognize and preserve the originality of their voices.

The best help we can give them is to provide a response—whether it be a gut reaction or a learned reading that draws on a certain context—from our side of the generational divide, although they get responses as well from their peers, which might just be more useful and valuable to them, coming from people who share their vibe.

What many don’t realize is what a precious resource we have in these programs and workshops here in our part of the world. Our friends from the region have begun to notice what a liberal and nourishing environment we have for young writers. There’s still patronage and paternalism in the system to be sure—this is Asia, after all—but it’s much less pronounced and potentially stifling than elsewhere. Our tradition is for the younger ones to tell their elders “Up yours!”—until they start putting on the poundage and the gray hairs themselves.

Speaking of writing programs, it was with great alarm and dismay that I received news of the planned closure of one of Asia’s most unique and successful graduate writing programs—the low-residency Master of Fine Arts (MFA) program at the City University of Hong Kong.

The low-residency formula allows students from Hong Kong and around the region to enroll for an MFA and work online with mentors from all over the world, flying in to HK just once or twice a year for intensive workshops and face-to-face interaction. Some Filipinos have gone through the program, and I’ve had the privilege to lecture and to read at a couple of sessions over the years.

The City University administration says that the program costs too much to maintain, but ironically the program turned the corner this year financially, so it can’t be just the money. We wonder if someone up there sees creative writing as a threat to socialism with Chinese characteristics. City U ‘s mandarins should know that Hong Kong’s and China’s prestige and goodwill derive from programs like this—and not from building lighthouses and airstrips in the South China Sea.