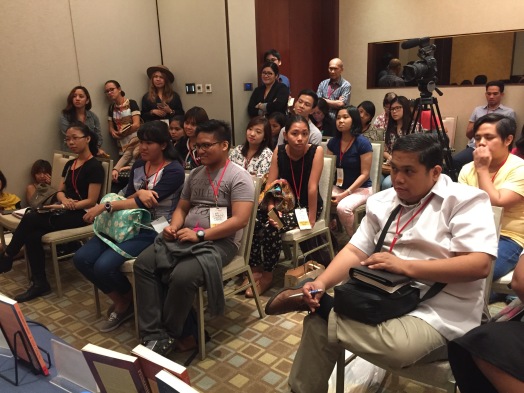 AUGUST AND SEPTEMBER are usually busy months in the cultural calendar, and this year’s been no exception. UMPIL—the Writers Union of the Philippines—held its annual conference toward the end of August, with the economist and columnist Solita “Winnie” Monsod delivering the customary Adrian Cristobal Lecture. On September 1st—perhaps the most important date on many a young Filipino writer’s calendar—the 65th Carlos Palanca Memorial Awards for Literature were given out, with poetry titan Gemino “Jimmy” Abad arguing eloquently for the power of literary language to create its own reality.

In that same week, National Book Store, among other sponsors, put on the Philippine Literary Festival at the Raffles Hotel in Makati, headlined by visiting authors Matthew Quick and Meg Wolitzer. I went on a panel at that festival with my friends Krip Yuson and Jing Hidalgo, with Marivi Soliven as moderator, to talk about writing the novel. I was surprised to walk into a packed room at the Raffles, despite the fact that Meg Wolitzer was holding forth in another session at the same time.

Now, I’ll admit that I’d never read Meg before, although I’d read about her recent novel Belzhar. She was advertised as a bestselling author, as was Matthew Quick, who wrote The Silver Linings Playbook.

I overheard a mild complaint in the hallway to the effect that the NBDB should have invited the powerhouse cast of Pulitzer prizewinners that Manila festivalgoers have been used to seeing (I remember hosting a chat with the wonderfully encouraging Junot Diaz a few years ago). I didn’t have the time to stop and respond to that comment, but I would’ve said, ”Hey, no problem! There’s a lot we can learn about producing bestsellers! And bestsellers can and should be well-written, too!”

Indeed, in our panel on the novel, one of the recurrent themes that came up was that we Filipinos don’t write enough novels (“We’re world-class sprinters,” I noted, “but not marathoners”), at a time when the only thing international publishers are looking for are novels, which can lead to fat Hollywood contracts and all kinds of other spin-offs.

Toward the end of that discussion, in the Q&A, a young lady in the audience asked about what we (presumably the literary Establishment, going by our senior-citizen cards) thought of newer and less traditional routes to literary fame like Wattpad. Thankfully, I’d heard of Wattpad, and had even actually registered on the site a few months earlier out of curiosity, so I could peek into what was going on there. I knew that Wattpad was generating stories that were already being adapted into commercial movies, so it was more than another digital pastime. (For my fellow 60-somethings, Wattpad’s a website where people—usually very young people—upload stories of all kinds, typically love stories, vampire stories, science fiction, and fantasy.)

I told the questioner that while it was likely that much of the material on Wattpad wouldn’t come up to conventional literary standards, I didn’t see that as a problem. What was important was that—at some level and with little or no intervention from their elders—young people were writing and reading, and that can’t ever be a bad thing. Tastes mature and change, and even within those young-adult genres, truly good work is bound to emerge and be recognized and rewarded. And even mainstream literature itself would ultimately benefit from the spillover; as Shakespeare put it, “When the tide comes in, all the ships in the harbor rise.”

But beyond supporting what younger writers were doing, I brought up another pet theme of mine, which is that we older writers write way too serious (if not sometimes inaccessible) stuff, and have thereby separated ourselves from our potential readers. Creative writing has become way too academicized—produced in, for, and by formal writing programs, with little regard for what ordinary readers are really concerned about in their daily lives. In other words, while we seek to develop our readership, or work on the demand side, we should also work on the supply side by writing material of more popular appeal, with little or no reduction in quality.

This train of conversation ran on a couple of nights later at the Palancas, where I had a chance to chat at the sidelines with Graphic fiction editor Alma Anonas-Carpio and essayist Ferdie Pisigan-Jarin. (I don’t smoke—and I would urge everyone not to—but I happen to find people who smoke usually more interesting to chat with than those who don’t, so I usually join the smokers out on the patio of the Rigodon Ballroom at these Palanca dinners, especially when the program—with my apologies to the gracious hosts and the contest winners—goes on for too long.)

I told Ferdie that I suspected that, outside of school, young readers these days didn’t really care much about author’s reputations, or about what critics or other old people say about a work. Ferdie agreed. “We undertook a survey,” he said, “and we found out that what makes young readers decide to buy a book is what they can get of the story from the back cover. They can’t even leaf through the pages, because most books these days are shrink-wrapped.”

From Alma came the astounding news that one young Filipino writer, Marian Tee, was making a regular six-figure income from the Amazon sales of her e-book novels. Though based here, Marian writes dreamy romantic comedies set in places like Greece, with titles like The Werewolf Prince and How Not to Be Seduced by Billionaires, and with covers displaying a surfeit of naked male muscle. The female protagonist may be blond, swears Alma, but she’s really Sarah Geronimo in disguise.

I’m not saying that we should all write like Marian, because we probably couldn’t even if we wanted to. But it’s good to know that there’s someone among us who knows the market and can play the global game, because there’s a lot we can learn from her—in adaptability, in audacity, in humility, and in plain hard work.

I don’t think that literature as a fine art will ever be threatened (any more than it already is); there will always be authors who won’t mind being read by a precious few, and thankfully so, because these are the writers who will keep pushing the envelope of language and exploring uncommon sensibilities. For most other writers, or most other times, it’s worth keeping in mind that “bestseller” isn’t necessarily a bad word.