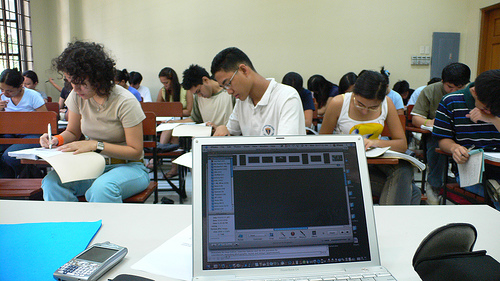 THE UNIVERSITY of the Philippines (UP) campus in Cebu City hosted the second presidential debate a couple of Sundays ago, and with education on the debate agenda, the setting couldn’t have been more appropriate. UP—so far, our only “national university” so designated—may be more than a hundred years old, but it continues to grow, particularly in places like the Visayas, Mindanao, and Central Luzon, where the demand for quality higher education is as great as ever.

Not too many people may have been aware of it, but in preparation for the debate—and indeed for the next national administration—UP President Alfredo E. Pascual commissioned a study by the university’s think tank, the Center for Integrative Development Studies (CIDS), to look into where we are in the regional scheme of things and how we can expect to catch up and compete with our more advanced neighbors.

Copies of the paper—titled “Knowledge-Based Development and Governance: Challenges and Recommendations to the 2016 Presidential Candidates”—were provided by UP to the staffs of the presidential candidates in advance of the Cebu debate. But knowing most politicians’ propensity to go for the sound bite and dwell on the personal, I tend to doubt if more than one or two of the candidates or their staffs found the time and the focus to read it.

It would be a pity if that indeed were the case, not only because of all the work that UP put into the paper (CIDS was backstopped by the offices of the President and the Vice President for Academic Affairs), but because of all the opportunities for development that we will likely miss, again, if our political leaders don’t heed what our top academic minds are saying.

The full text of the paper can be found here: http://www.up.edu.ph/wp-content/uploads/2016/03/20160315-UP-Knowledge-Paper-Final.pdf. For the benefit of our readers (and maybe the odd politician who will read this), I’ll unpack the technical jargon and get to the core of what the paper says and proposes.

It opens with an indisputable premise: Education is indispensable for economic development. More education means less poverty and income inequality, because it drives innovation and productivity, and helps people adjust to new challenges and opportunities.

But of course we already knew that. In a society like ours, we all look to education as the way out and the way forward, which is why our people slave for years overseas to put their kids through college. So sacred is education to the Filipino family that every candidate for public office, especially the Presidency, feels duty-bound to extol its virtues.

To be fair to the present administration, it’s put its money where its mouth is, for the most part. The study notes that “Since Benigno S. Aquino III assumed the presidency, government expenditure on public education has enjoyed annual increases. Out of the education sector‘s PHP364.9 billion budget for 2015, PHP43.3 billion was given to state universities and colleges—a 13.8 percent increase over the 2014 allotment…. Over PHP3 billion was made available for scholarships under SUCs and more than PHP2 billion for scholarships administered by the Commission on Higher Education. A total of PHP316 million (roughly 0.09 percent) was earmarked to fund research.”

That sounds good, but sadly it’s still not enough. The rest of our ASEAN neighbors spend an average of 5 to 6 percent of their GDP on education, but we try to make do with 3 percent. That’s why even our best universities lag behind their global and regional counterparts. The study notes that “In 2014, the University of the Philippines ranked only 8th out of the top 10 universities in ASEAN. In 2010, the Philippines ranked 89th in the global Knowledge Economy Index, far behind Singapore, which placed 19th.”

With all the new phones, computers, and call centers we see around us, we might be led to believe that the Philippines has become a high-tech haven, but that just isn’t so. (“We may be No. 1 in voice operations,” I once heard President Pascual say in relation to BPOs, “but were just around No. 9 in non-voice, which is where there’s more value-added. We need not just call center agents, but software engineers!”)

In its summary, the study observes that “Our level of technology remains low in quality and scale, and concentrated in low-productivity sectors. To catch up and move ahead faster, we need to raise our scientific and technological skills, which only better and more focused education can achieve.

“This calls for massive government investments in high-level knowledge capital—the so-called ‘suprastructure’ of economic growth. This human capital will create a knowledge-based economy driven not just by brawn but brains, tapping into one of our richest but least developed resources.”

In other words, and to put it plainly, we need more brainpower—more nerds, if you will—of the kind who can innovate, produce, do trailblazing research, and network with their global peers. That kind of knowledge can reap sizeable benefits for our economy, as it’s done for Singapore, China, Korea, and a host of other countries who’ve invested in their “suprastructure.”

But PhDs don’t come easy and don’t come cheap. UP argues that our government should have a plan to produce them systematically. The object of our educational system shouldn’t just be producing hordes of college graduates who can’t find good jobs, but graduates in fields and with skills that the economy actually needs. The best of them should be sent abroad for advanced degrees, and then brought home with sufficient incentives and an environment conducive to research. The UP paper goes even farther and recommends that in areas where we lack expertise, world-class professors and researchers should be enticed to teach here and work with their local counterparts, in the same way that Singapore was able to considerably shorten its learning curve.

While much of this will occur in science and technology, the paper wisely notes that “Because values are important in setting the right path to growth, the promotion of science and engineering should be closely integrated with the social sciences, the arts, and the humanities to ensure the holistic development of the Filipino.”

To spread the work and its benefits, the UP paper envisions a hubs-and-spokes model of development anchored on regional centers of excellence in certain fields—possibly even other national universities beyond UP.

There’s a lot more to be found in the study that was UP’s gift to the candidates—and thereby to the nation—but whether any practical good comes out of it will depend on the political leaders who govern our fortunes, and, ultimately, on us who vote them into office.

(Kindly note that as a “think paper” subject to further discussion, the study mentioned here does not necessarily reflect the position of the UP academic community as a whole, but rather of the researchers and offices involved.)