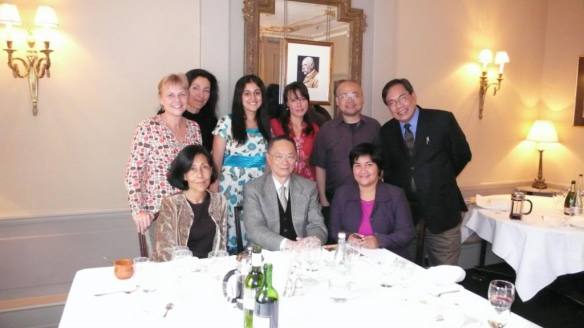 IT’S BEEN nearly 20 years since I received the news that I had won the biggest writing grant of my life. I was 45 and raring to work on my second novel, and had a germ of an idea, suggested by the sad parade of caskets that arrived almost daily at Manila’s international airport. I knew that our overseas workers and their experience was the big story of that period, but I needed time away from teaching to get started on the project, so I applied for a new grant that was being offered at the University of East Anglia in the UK for what was described then as “a novel of Asia.”

The UEA website describes that fellowship thus: “The David T. K. Wong Creative Writing Fellowship is a unique and generous annual award of £26,000 to enable a fiction writer who wants to write in English about the Far East to spend a year in the UK, at the University of East Anglia in Norwich. The Fellowship is named for its sponsor Mr. David Wong, a retired Hong Kong businessman who has also been a teacher, journalist and senior civil servant, and is a writer of fiction. The Fellowship was launched in 1997 and the first Fellow appointed from 1st October 1998.” (Collections of short stories are now accepted in lieu of the novel. The UEA and its writing program are acknowledged to be the leader in the field in the UK, with Booker Prize winners Kazuo Ishiguro, Ian McEwan, and Anne Enright among their distinguished alumni.)

I honestly can’t remember now how I chanced upon the Wong Fellowship—these were the early days of the Internet in the Philippines, when modems screeched like mating cats before connecting over phone lines—but Beng and I soon packed our bags for the privilege of a lifetime. It would take a few more years, but that idyllic journey eventually gave birth to Soledad’s Sister, which was shortlisted for the inaugural Man Asian Literary Prize in 2007 and published in 2008. I was only the second Wong Fellow, and after me, in 2003, another Filipino followed me to Norwich—Lakambini Sitoy, now based in Denmark, whose novel Sweet Haven also began taking shape in Norwich.

Last month came the terrific news that yet another Filipino, Nathaniel Go, had been named the new David T. K. Wong Fellow, besting dozens of other applicants from around the world. I was so elated by the news that I sought out Nathan, as he prefers to be called, by email, and got this story from him:

“I was born and grew up in Davao City. This is quite a statement to make nowadays as Davao has suddenly received a lot of attention. But back then, I remember a quiet and laid-back existence, highlighted every summer with the sickly sweet smell of mangoes, as our neighbor who owned a farm, would bring in basket after basket from their harvest. When it rained, water buffaloes would sometimes stop traffic outside our house by bathing in the large potholes filled with mud. The best thing to have come out of such a childhood, of course, is my love of books. Our bookshelf was quite small and included such juvenilia as the Bobbsey Twins, Hardy Boys, and Nancy Drew. Choose Your Own Adventure was also a hit back then. The Bible was a staple. Agatha Christie’s mysteries were the gold standard. Eventually, once I developed a taste for books I quickly sought new titles from our school library.”

Nathan was a voracious reader, so much so that his school librarian once dared him to bring a truck to borrow the whole collection. He left home at 16 and went to Ateneo de Manila, but moved to the US shortly after to join his siblings in California, where he finally got to study what he had always wanted—literature, linguistics, political science, and screenwriting. He worked briefly as a paralegal before giving in to his muse and studying fiction at the University of Michigan and at the Iowa Writers’ Workshop. A PEN Center USA Emerging Voices Fellow, Nathan has taught creative writing at the Braille Institute. He will be working on his first novel in Norwich. But as far as he’s come in the world, Nathan still writes about the Philippines and still considers it his home.

“I go back every now and then and I’m always surprised by how fast things are changing, but how—underneath the changes—the fundamental things remain the same,” he says. “These fundamental things are hard to articulate, but I guess that’s where my stories come in. As an author, I straddle an identity and the space between a true insider and outsider of the Philippines. I write about Davao and I write about the small Filipino Chinese community there that I belong to, because that’s the kind of stories I’d never read while growing up.”

Three Filipino fellows in 19 years is surely worth cheering about, but I can’t help thinking—having seen the talent out here—that we (and other homegrown Southeast Asians) could be sending more fictionists to Norwich, and Nathan’s triumph is a welcome reminder of that wonderful possibility. For more information about the David T. K. Wong Fellowship, look here: https://www.uea.ac.uk/literature/fellowships/david-tk-wong-fellowship.

(Pictured on top are the Wong Fellows at a reunion with David T. K. Wong in London, 2008. Image of Nathan Go courtesy of UEA.)