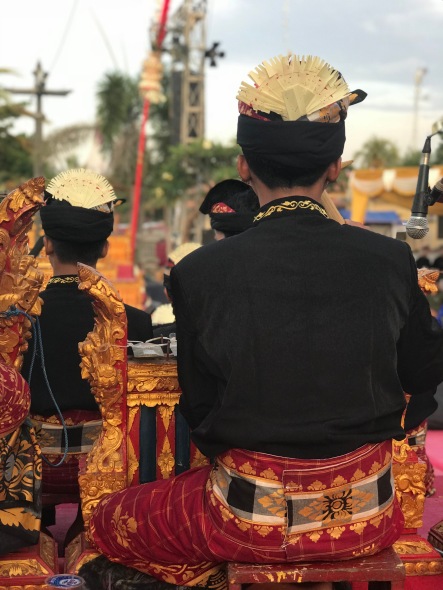 The first time I saw Bali was 34 years ago. I was a much younger man, then only 29, an eager participant in a writers’ conference organized by F. Sionil Jose, in the company of other Filipinos who included, as far as I can remember, the late Rey Duque, Marjorie Evasco, Charlson Ong, and Fanny Llego. We spent a week in a villa on the steamy banks of Lake Batur, far away from the tourist traps of Denpasar and Ubud, which we would visit only at the very end of our trip.

It was my first time to attend an international gathering of writers, and I was deeply impressed by all the big names I met, aside from Manong Frankie himself—our host, the scholar S. Takdir Alisjabanah, among the pillars of Bahasa Indonesia; the Singaporean poet and professor Edwin Thumboo; the Malaysian poet and lawyer Cecil Rajendra; and the Malaysian-American poet Shirley Geok-lin Lim. I can’t recall a thing I said in the impassioned discussions that took place; that first time, it was all about listening and imbibing the wisdom of the masters in an environment that could not have been more conducive to inspiration. 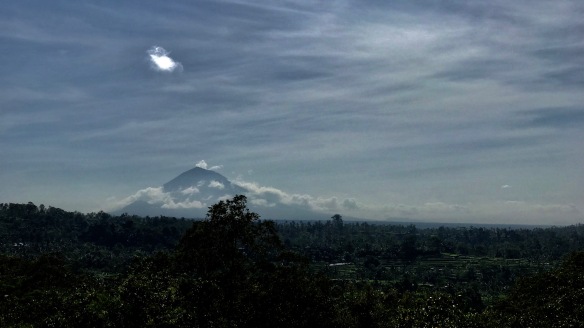 The lake was a caldera, which explained the hot springs simmering on its fringes, where we joined the unabashed Balinese in their early-morning ablutions; at night, we argued literature under the spell of the stars and the aptly named Bintang beer, to the faint accompaniment of a gamelan symphony. The one discordant note that I would later write about in a short story was an ill-advised sortie across the lake to a private graveyard, which the locals resented; but even that was a writerly touch, an almost obligatory twist to a near-perfect plot. And rightly so: back home, Ninoy and EDSA had yet to happen, and the country was seething in the darkness.

These memories swarmed through my senses last week when I returned to Bali for yet another literary conference, the tenth annual meeting of the Asia Pacific Writers and Translators (APWT), the region’s largest and most active literary network. Hosted by the Ganesha University of Education in the city of Singaraja in the northern part of the island, the conference brought together about a hundred delegates from all over, but mostly from Australia, Singapore, Malaysia, the US, and, of course, the Philippines, which has always figured prominently in this organization (I sit on its Advisory Board). With me were UPICW Director Roland Tolentino, the essayist and playwright Luna Sicat-Cleto, the poet and translator Randy Bustamante, and my wife the art restorer Beng, an avid observer and fully paid member of APWT.

Even the most jaded of writers can’t be faulted for flying into Bali and expecting a bit of paradise, and the island and its people can still deliver on that promise in spades. The manicured rice terraces, the monkeys lining the road, the meticulously patterned garlands, the whiskery banyan trees, the uncountable temples and altars—and let’s not forget the scenically smoldering Mount Agung on the horizon—all suggest transport to another realm of blissful serenity. That illusion, of course, was broken fifteen years ago by catastrophic terror bombings that took more than 200 lives, and in the course of our three-day conference, testimonials by our Balinese friends themselves would reveal certain painful realities behind the festive façade.

“It’s very difficult to be a Balinese woman,” more than one of them said (I’m pooling their voices together, as in a chorus). “People expect you just to be a pretty flower. I have a PhD and I make more than my husband, but I still have to appear subordinate to him and to his wishes, and I have to serve him at home, making his coffee and serving his clothes. When I received a fellowship abroad, people congratulated my husband, instantly assuming that it was his achievement and not mine—and I had to smile and say nothing about it. You know why I write in English? Because my husband can’t read English, so English liberates me, allows me to express my true feelings.” 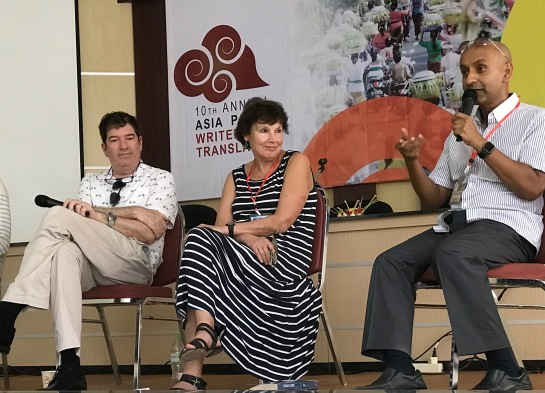 Another intriguing panel I attended took up “Nostalgia and the Asian City,” and the discussion dwelt on how cities like Hong Kong and Singapore had changed in the literary imagination. But, from the floor, I had to interject the Philippine experience and note how nostalgia in many other places like ours referred to a longing for an unspoiled rural Eden that no longer exists, an unrecoverable if not fact an imaginary past. Over lunch, I pursued the point: nostalgia is being used as a powerful political tool, such as in defense of a mythical “better time under martial law” to support a restoration of that regime.

I was assigned to a panel devoted to protest literature, and found myself grouped with three Australians who spoke on their respective struggles as immigrant, aborigine, and bohemian writers. I chose to speak about our history of protest literature and what a deadly business it was. So, our moderator asked in the end, what were we personally doing to upend the status quo? The status quo for me, I said, was darkness and despair, and it was winning out even in literature, so that there’s nothing easier to write these days than another sad and dismal story. Therefore, I would strive to write happy stories—stories with a believably, hard-won, happy ending—as my form of resistance. We have to fight for joy as much as justice; we have to keep fighting for happiness, hope, and beauty in this age of Trump and tokhang—what else were we persisting for?

As I said those words—which I had not expected to say, but had long been coming around to saying—I felt all of my 63 years, hoping perhaps that some young soul in that audience was truly listening.