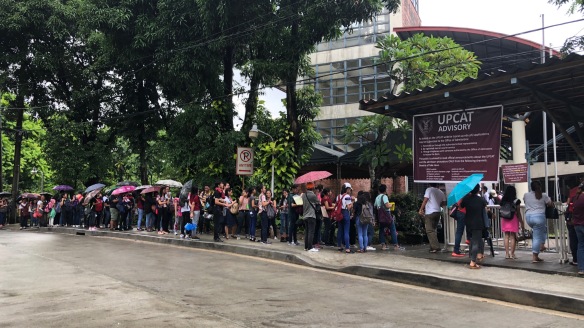 ART CRITICS often like to write about the Pinoy penchant to fill up vacant spaces—our horror vacui, evident in everything from our front yards to our jeepneys and desktops. And when there’s nothing to fill up a nice big void like an empty hall or open street with, heck, we fill them up with our own bodies, to form a healthy crowd.

We Pinoys usually don’t think too much about being caught in a crush at the LRT, the ballgame, or the rally. Indeed, students of crowd psychology will point out that while they may be uncomfortable, crowds can also generate positive synergies, and that even in the most seemingly unruly mob, an inner logic eventually emerges and prevails.

But we also know that crowds can turn ugly and deadly pretty quickly, as the stampedes that every and then convulse English football show. Even much less than that, there’s nothing funny about people fainting in a queue or in a surging mass of bodies desperate for one thing, whether it’s a glance from a rock star or a little slip of paper that could be a ticket to a first-rate college education.

All this was on my mind last Monday as I dealt with one of my busiest days as a school administrator at the University of the Philippines, where an estimated 40,000 people converged at the Office of Admissions in Diliman in one day to submit their applications to take the UPCAT, UP’s entrance exam, in mid-September. To wrap your head around that figure, Diliman has 25,000 students on a normal day. But my guess is that at least half of those 40,000 were anxious parents taking a day off from work to accompany their kids.

It was actually the extended deadline for students of private high schools in Metro Manila (not public as erroneously reported—a lot of fake or unverified news went out that day and after, and a woman presenting herself as a network news reporter even urged the crowd to chant for an extension as her camera rolled). As a torrent of tweets soon reported, the lines kept growing longer, tempers flared, and panic seized more than a few people in the area. The media calls came soon after, and—as UP’s equivalent of, uhm, Harry Roque—I spent the rest of the day and part of the evening fielding questions.

Did we expect the size of the crowd? Well, yes and no. The surge in applications was unprecedented—in years past, we’d get something like 80,000 applications; last year it was 103,000, and this year, our estimate runs to about 167,000. What accounted for the sudden bulge? Free tuition, for one, and K-12, for another. (The actual number of qualified exam takers could be about 20 percent less, and the admission rate—those who “pass,” although there’s no fixed passing grade—about 17 percent of all takers, which is a function of UP’s carrying capacity.)

We did see that coming, but I guess what we didn’t anticipate was how many students (and/or parents) would choose to appear and line up in person, rather than avail themselves of other less stressful options clearly stated on the application webpage—to submit applications online, or by mail or courier, or in bulk with the help of their school. (UP provided the extra option of a drop box when it saw how large the crowd was.) That was probably because queuing up guaranteed—if all your papers were in order—a test permit at the end of the line. But that also meant that the line could take all day.

So we Pinoys are seguristas, willing to sacrifice comfort for the certitude of paper in hand. We still mistrust electronic processing, and can’t wait a couple of weeks to know our fate. I went onsite to see for myself what was going on, and was told by one exasperated guard that “They won’t listen! There’s a drop box right there, and we’ve told them they can courier the forms, but they’d rather line up for hours!”

You’d also have to wonder why Pinoys like to wait for deadlines to do the inevitable; July 30 was already an extension from July 27, and applications had been open for three weeks. But to be fair to the students and their parents, it wasn’t entirely their fault to have waited so late in the day to submit their papers. Some told me that their high schools had held their papers up; some were charging rather stiff fees for handling UPCAT forms.

And was there a class factor at play? When the turn of the public high school applicants came, the huge crowds dwindled, and the lines got shorter—and far fewer parents appeared, because they probably couldn’t afford a day off, or trusted their children to fend for themselves. Things moved more smoothly.

There are lessons for everyone to be learned here—by the students, by the parents, and by us, most of all—and we’ll continue seeking ways to ease procedures for everyone in the years ahead. Eventually, I foresee a time when all submissions will be made online, like visa applications—something we can’t enforce until every Filipino has access to the Internet, and overcomes his or her mistrust of information technology. Until then, we’ll all have to learn better crowd management, provide lots of water and Portalets, exercise patience, take the media brickbats, and soldier on.

Maybe this was a crowd that didn’t really need to be there, but on the other hand, and to put it positively, it was a stark visual reminder of the intensity of our people’s aspirations for a good college education. The best way to disperse it long-term would be to meet those needs, in UP and beyond.