I’M ALWAYS intrigued—sometimes enthralled, sometimes amused, sometimes annoyed—by the descriptions I come across in my old books of Filipinos seen through the eyes of foreigners. Jose Rizal, of course, had the same interest, and painstakingly annotated Antonio Morga’s 1609 Sucesos de las Islas Filipinas, correcting what he thought Morga hadn’t quite understood. (There’s that famous reference to “stinking fish,” which Rizal points out is just bagoong.)

Thousands of books have since been written by visitors to the Philippines since Morga, and overwhelmingly they’ve been authored by white men. As the American period opens, we begin to see accounts such as those written by Mary Fee (A Woman’s Impressions of the Philippines, 1910). But by and large, we encounter what some might call the colonial male gaze, particularly as applied to Filipino women.

One of the earliest accounts I’ve come across in my library is that of Paul P. de la Gironiere, whose Twenty Years in the Philippines (1853) is a long (and some say fanciful) adventure story, with the author as hero, in the romantic mode of the period. His description of the mestiza is very finely detailed:

“In fine, if Binondoc be exclusively the city of pleasure, luxury, and activity, it is also that of amorous intrigues and gallant adventures. In the evening, Spaniards, English, and French, go to the promenades to ogle the beautiful and facile half-breed women, whose transparent robes reveal their splendid figures. That which distinguishes the female half-breeds (Spanish-Tagals, or Chinese-Tagals) is a singularly intelligent and expressive physiognomy. Their hair, drawn back from the face, and sustained by long golden pins, is of marvellous luxuriance. They wear upon the head a kerchief, transparent like a veil, made of the pine fibre, finer than our finest cambric; the neck is ornamented by a string of large coral beads, fastened by a gold medallion. A transparent chemisette, of the same stuff as the head-dress, descends as far as the waist, covering, but not concealing, a bosom that has never been imprisoned in stays. Below, and two or three inches from the edge of the chemisette, is attached a variously coloured petticoat of very bright hues. Over this garment, a large and costly silk sash closely encircles and shows its outline from the waist to the knee. The small and white feet, always naked, are thrust into embroidered slippers, which cover but the extremities. Nothing can be more charming, coquettish, and fascinating, than this costume, which excites in the highest degree the admiration of strangers. The half-breed and Chinese Tagals know so well the effect it produces on the Europeans, that nothing would induce them to alter it.”

Alfred Marche, whoseVoyage aux Philippines(1887) contains some of the loveliest engravings of local scenes, including one of an unmistakably Filipina beauty, observed (in French) that “The Bella Filipina is one of their favorite tunes, which celebrates the grace, the beauty of Filipina women, señoras  whose type is more or less vague and floating, because there has been a lot of mixing in this corner of the earth.”

Frank G. Carpenter was one of those globetrotters whose journalistic dispatches popularized geography, and he wrote this in his book Through the Philippines and Hawaii (1926) about an evening in a Manila theater, under the heading “The Fair Filipina”:

“All the seats are full, and there are perhaps five hundred dark-skinned people dressed in their best in the boxes and pit. On all sides of us there are Philippine girls and women of every condition and age. Look for an instant at this girl at my side. I pretend to take notes of the play as I write this description, and since it is safe to say that the little lady cannot read my scrawl, she will not object. What a pretty creature she is ! If she were white you would call her a daisy, but as she is brown the name “tiger lily” will fit her much better. She is a plump little thing, with liquid black eyes and a skin as soft and smooth as cream. Her luxuriant black hair is put up in a great knot just back of her crown, and held there by a comb of gold set with rhinestones. Sneak a look out of the tail of your eye at her small brown ears, with the big rings in their lobes, and at the same time notice that gold chain wound round her neck. Maybe you have thought of Filipinas as dirty, ragged, and poor. This one, at least, must be well-to-do, and there are scores just like her all over the house.

“How well the black gauzy dress shows off the beauty of her neck. Her costume consists of a low-cut jacket, with great bell-like elbow sleeves standing out from the arms. Her embroidered undergown also is cut low. About her bare shoulders is pinned a kind of kerchief. I say her shoulders are bare, for the kerchief and jacket are of such sheer stuff that through the meshes you can see the plump, dimpled shoulders and arms. I venture you never saw so many beautiful arms and necks at one time.”

Shall we be enthralled, amused, or annoyed? You be the judge. 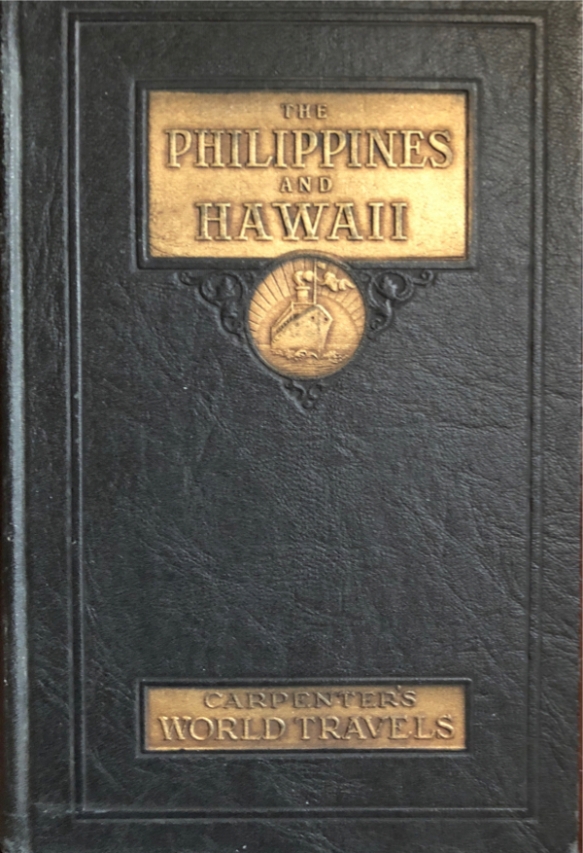