A FEW months ago, I wrote about picking up some wonderful books online that I plan to add to my retirement library—books that I’ll be poring over at leisure, for no more compelling or more urgent reason than enjoying the stories they contain, or even just the way they were printed, illustrated, and bound. I won’t be writing any papers about them (well, maybe a column or two), and I’ll leave myself the option of reselling some of them to share the fun and feel better about buying some more.

Most of these books come from the USA, chiefly from eBay, where I’ve been actively trading for more than 20 years. You’d be amazed by the Philippine treasures—not just books but paintings and other artifacts—that made their way overseas and eventually turn up on eBay. I’ve made it my personal mission (of course my wife Beng calls it my excuse) to recover these precious objects as much as I can afford on my professor’s salary—important or interesting Filipiniana, for example, such as the first US publications of Manuel Arguilla’s stories, and early editions of Carlos Bulosan’s books.

I’ve sourced books and paintings from as far away as France, Spain, and Portugal, and have successfully had them shipped to me in Manila by regular air mail. To save on shipping, however, I typically accumulate all my US purchases at our daughter Demi’s place in San Diego, California, and then have them couriered to me when they’re enough to fill a box, or wait for our next visit to Demi and her husband Jerry to cart them home.

That opportunity happened last week, on my annual vacation leave. We came too early for Comic Con this year, but I had stranger things than, well, Stranger Things in mind. I was eager to plow through and pack away about a hundred pounds of books and paintings that had been piling up at Demi’s over the past six months.

The paintings—which include a large and marvelous Gabriel Custodio seascape from 1966 that I found at a resale store in Spokane, Washington—will be worth another story, but for now, let me share some of the most interesting publications from the pile. 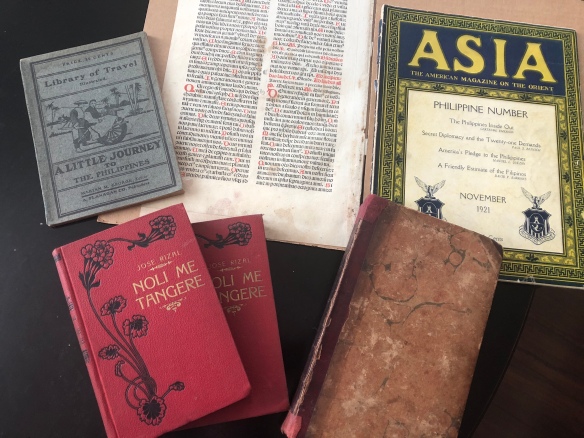 Old editions of the Noli and Fili are always desirable objects of study, and to complement the rather eccentric 1911 Fili I acquired last year, I received a two-volume 1909 Noli from Madrid (also published by Maucci in Barcelona), with annotations by Ramon Sempau. It’s interesting how, scarcely a decade after his execution, Rizal is hailed as a patriot by the Spaniards. This edition contains the Last Farewell and an account of his trial. (Another later edition in the pile, a Noli retitled and published by Norton in 11961 as The Lost Eden, is introduced by James Michener, who describes the novel as “a nineteenth-century Gothic melodrama, filled with eery churches, flashes of lightning, ominous strangers, premonitory whisperings, and almost unacceptable coincidences.”)

I try to collect old books that have something to do or say about the Philippines, but of course that becomes more difficult the farther back you go. In my office, I display a page from a German book on geography from 1578 that talks about “den Philippinischen Insuln,” and I’m sure other collectors have much earlier material. But sometimes I pick up antiquarian documents just to be able to show my students what truly old texts looked like, and in this batch is a page from a Latin breviary published in Augsburg in 1490—an example of true incunabula, or something printed roughly within 50 years of Gutenberg’s 1455 Bible.

There’s an extensive and rather grisly account of a “Massacre at Manilla” in my 1822 copy of Vol. X of The Atheneum, a Boston-based compilation of highlights from imported contemporary English magazines (the “magazine” as we know it today grew popular in England in the 1700s). The article is an unattributed eyewitness account, reported by a victim of a brutal massacre of foreigners—English French, Danish, Spanish, and Chinese, among others—following a false report that they were responsible for fomenting a cholera epidemic that had decimated the natives by giving out poisoned medicine (shades of today’s Dengvaxia hysteria). It occurred to me that I had read about this same massacre before from Paul P. de la Gironiere, who was serving as a doctor aboard a French ship in Cavite at the time, and who claims to have performed great deeds of daring in the emergency.

More congenial is A Little Journey to the Philippines (Chicago: A. Flanagan, 1900), edited by Marian M. George, filled with observations of a pleasant nature: “Our boat is anchored, and we start off with a guide for the Enchanted Lake. We pass ponds filled with fragrant pink pond lilies, and shortly begin to climb the crater of an extinct volcano.” It also remarks, perhaps presciently, that “There is no Philippine nation. Instead there are numerous governments; the people are divided into over eighty different tribes; and there are over seventy-five different languages spoken among them.”

If I had more space in my baggage and my house, I would buy tons more of these books, which remind me how we keep drifting back to the past, despite the GPS in our iPhones.