I’VE NEVER used PowerPoint in my life as much as I had to this past year, largely because I’ve been asked to do many presentations—briefings, TEDTalks, and such. For the longest time, I’d resisted using PowerPoint (and its Mac counterpart, Keynote), not because I dislike visual aids, but because I felt confident that I could get my message across just by having people listen to my words and my voice.

That works—sometimes. I feel that when I’m talking to persuade—like when I spoke at the annual conference of the Writers Union of the Philippines to argue for the need to give evil a human face, or when I exhorted young writers at the Palancas to remember to write for oneself after writing for others—then direct address works better, without props or pictures.

After more than 30 years of teaching, I’ve long lost whatever shyness I may have had about public speaking—a teacher has no better tool in a classroom than his or her voice—but that doesn’t mean talking comes naturally, especially if you have to make sense. In the ten minutes or so before every class, walking down the corridor or up to my floor, I rehearse the lines I’ll be opening with, the points I have to make. It does get easier with time and practice, but every class is a performance, every audience a fresh challenge.

Perhaps it helped that, in our elementary years, we had a subject called Declamation which forced us to memorize and recite long, elaborate poems and speeches like Edwin Markham’s “The Man with the Hoe” and Mark Antony’s lament at Caesar’s funeral. We may not have understood what we were emoting about with full juvenile fervor, but—at least for me—it got rid of the stage fright, and I marveled at the fact that, if you spoke well and clearly, people listened.

Of course that was something that politicians already knew. They could whip the masses up into a maniacal frenzy—just with words. No flash cards, no graphs and charts, and yes, no PowerPoint. Not for Hitler, not for Marcos, not for… well, most other demagogues you can think of, some orange-haired presidents included. They knew that nothing could mobilize people better than fear, and nothing could stoke fear better than the imagination, such as of alien hordes and drug-crazed zombies streaming over the border. (On the other hand, the good guys could raise the dead as well with eloquently simple but moving oratory—think of Churchill’s “blood, toil, tears, and sweat” speech of 1940, which drew on similar remarks made much earlier by Theodore Roosevelt, not always a good guy.)

It’s tempting to suggest that if Churchill et al. had to use PowerPoint to rally the troops, the Battle of Britain would have been lost as he fidgeted, as presenters often do, with the controls and clicked back and forth between slides of Spitfires, Hurricanes, Heinkels, and Dorniers and rattled off their ranges and payloads. If Genghis Khan had to sit for a PowerPoint presentation on the economic and tourism potentials of every new territory over the horizon before he actually shouted “Advance! Kill! Plunder!”, he would never have gone past the Yellow River.

But of course today very little can happen without someone first having to plunk down a laptop, connect a medley of cables and wires, tinker with screen and clicker, and run through a cascade of slides in a coma-inducing monotone.

But I’ll admit it: there’s nothing like PowerPoint when people need to see what you’re talking about, whether it’s the tomb of Tamerlane in Samarkand, a genetically modified eggplant, or a fountain pen Jose Rizal would have written with. It’s most useful in speeches and lectures meant to inform, providing visual reinforcement for such abstract (and, these days, politically unfashionable) concepts as “human rights,” “freedom of the press,” and “territorial integrity.”

I remember being fascinated by scenes from the Bible that our Religion teacher in grade school flipped through in a roll of posters, and I’m sure we’ll all agree that the impact images produce is visceral.

That said, let me rattle off some of my pet peeves when it comes to PowerPoint presentations: 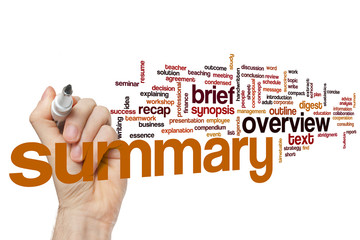 IN DEALING with communications and reports drafted by my office staff and by my students, one problem I often encounter is the writer’s inability or reluctance to summarize needlessly long passages.

Some of that happens simply because the writer doesn’t know how to digest material, which further means that he or she can’t distinguish between the relative levels of importance of different statements. Another reason is sheer fear, especially in authoritarian or sensitive environments where messing with someone else’s text could land you in major trouble.

But we all need summaries, good ones, of everything out there. We simply don’t have the time to slog through every document that comes our way in this information-saturated age.

Good summarizing takes sharpness of mind and boldness of spirit. It means you know which parts you can cut without doing damage to the heart of the piece and that you can stitch the snippets together to form a new whole. You’d be surprised by the compelling clarity that shines through a properly summarized paper, by how much latent energy pulses in tautened prose.

I had an interesting conversation last year with a Filipino graduate student in Seoul. I was recalling the time more than 40 years ago when, as a junior writer-editor employed by the National Economic and Development Authority, I wondered why the current Five-Year Development Plan I was editing was as fat as a phone book, while the South Korean plan I had as a reference was no thicker than a Perry Mason paperback. And look, I told the student, where Korea had gone, minus the verbosity.

And then the student told me something that explained away the mystery of that anorexic document. In Korea, he said, managers and CEOs put a premium on brevity; the higher up the ladder your document went, the more condensed it was expected to be, to spare the bosses the chore of plowing through pages of data. Recommendations were to be brief and to the point.

It’s surprising because it seems so counterintuitive. For most of us, less is simply less and more is surely more. Our normal tendency is to add, to elaborate, to complicate until we can barely remember what our original thought was. We Pinoys especially have a tradition of rhetorical bombast that employs big words without meaning much, and we’ve mastered the art of filling dead air with, well, dead sounds.

This is why speakers in school programs (and the people who introduce them) take forever to say the most prosaic things; people walk up to the mike in the open forum and feel compelled to tell their life story before finally asking a question, if they do at all. We love to talk for the sake of talking, cluttering our prose with the same verbal indiscipline.

For me, a good summary begins, first of all, with the writer’s grasp of the main ideas running through the piece he or she is summarizing. This requires a thorough read-through of the original and an understanding of its basic argument. Without this sympathetic comprehension, attempts at trimming it down to size are bound to fail or to at least be misdirected. The best book reviewers are great at being able to reduce a thick volume to its thesis. That’s because they’re not just idle English majors like you and me, but are very likely experts in the field who may know more about the writers and their subjects than the writers themselves.

Since most of us aren’t such experts, the next best thing would be to take careful notes of what’s being said—identifying (and even physically highlighting) main points in the text and understanding why they’re being made. These points can then be paraphrased, condensed, and sequentially presented.

A good summary is also mindful and possibly reflective of the tone of the original—whether businesslike, contemplative, combative, or comic, for example. Nowhere should the summarizer’s own opinions or biases intrude, unless one is summarizing one’s own material.

This leads me to one of my pet peeves, the abuse of PowerPoint by speakers who don’t know the difference between a talk and an AV script. These are the people who will turn their whole speech into slides that are little more than blocks of text and unreadable graphs, and who will do little more than read everything that’s being flashed onscreen.

We might not mind this practice too much if these speakers were audibly engaging, knowing which phrases to emphasize or when to pause for dramatic effect. In many cases, however, this ritual is performed by zombie-like drones who seem to have no inkling that they actually have an audience behind them (behind, because they’re reading off the screen)—and an audience that can read as well as, if not faster than, them. PowerPoint presentations are meant to be verbal and visual summaries of whatever is being pitched.

There’s little excuse for a long paragraph to be splashed across the screen where a picture and four or five memorable words will do. That paragraph will be forgotten as soon as the slide vanishes, but the image will linger long afterwards.

Of course you’ll always lose a little something even in the best summary, but let’s put it this way: the best summaries will make the reader want to read the rest of the material, which is what you probably wanted to happen in the first place.