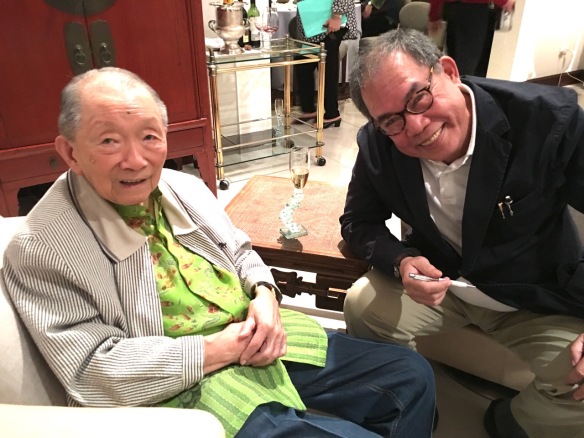 THE LAST time I saw Wash SyCip was from a far distance. It was his 95th birthday on June 30, 2016, and a long line of well-wishers—businessmen, politicians, and other celebrities—had queued up at the ballroom of the Shangri-La Makati to greet him and have their pictures taken with the icon. I thought for a second about falling in line, just to say hello, but then decided against it, already having spent more time with Wash than most people except his closest associates. He looked more frail than I had ever seen him, even as he kept up a cordial countenance seated in his chair on a raised dais, and I felt content to remember the sprightlier octogenarian I had first met a decade earlier.

Of course I knew who Washington SyCip was well before then; my wife Beng worked as an artist in the communications department of SGV in the 1980s, but I had never met the man himself—not until an opportunity arose to bid for and to write his biography in early 2006, when he was turning 85. I felt very fortunate to have been chosen for the job—and that’s what it was to me then, a job, albeit one involving an illustrious subject. I had no inkling that I was about to enter into a privileged friendship, something that would extend well beyond the writing of a book.

I had already done books for and about other personages in politics and business, and would do many more after Wash. But none of them—meaning no disrespect to or disregard for my other clients—would come close to the biography I would write for Wash, and it had everything to do with the uniqueness of the man, who lived not only an extraordinarily long life but also one far more colorful than you would credit an accountant for.

For months, we met Saturday mornings in his seventh-floor SGV office, and chatted for a couple of hours about phases of his life, proceeding chronologically from his childhood to the key decision to open his own accounting firm, a moment that I would later decide to open the book with. (Wash: Only a Bookkeeper was published in 2009 by the SGV Foundation and the Asian Institute of Management, and won the National Book Award for Nonfiction in 2010.) Immediately I felt at ease with his polite formality; no artificial chumminess there or dramatic flourish, just a quiet consistency of well-remembered detail, everything from trying to learn the foxtrot for a graduation dance and breaking Japanese codes in Calcutta to carrying a cold, dressed duck under his arm on the New York subway to bring to a lady friend.

Most readers, I’m sure, were looking for the grand contours, the big business decisions—and there’s all that in the book—but I tried to keep things homely, and was glad that Wash was game for it. He liked to play “Lara’s Theme” from Dr. Zhivago on his iPod—but not being a techie, often forgot to recharge it.

When he learned that I collected pens, he sent a bunch of them over to my house; I opened the box and saw that he had gifted me with some very nice ballpoints, which I thanked him for. When a perceptive associate gently reminded him that I collected not ball pens but fountain pens, he sent another box of the correct writing instruments—CEOs like him typically received scores of these as gifts and stored them away in drawers—with an apologetic note, even more graciously acknowledged by the ecstatic recipient. And every Christmas we would receive a box filled with some lovely piece of décor handcrafted by a microenterprise he supported in Cebu.

He had a soft spot for Filipino talent of all kinds. He once hosted a party at his home for President Cory Aquino, some ambassadors, and similarly lofty people. After dinner, he sprung a surprise on them. “Just get into your cars and follow me!” he announced with a twinkle in his eye. He led the convoy to a dimly downscale stretch of Boni Avenue, down into the happy maw of Club Mwah, the gay musical revue. Cory had a blast, and I had fun watching Wash garlanded by that feathery parade.

Sometimes I dropped by his office or chatted with him in the corner of a soirée to hear him share his views on current goings-on, both of us probably thinking that they would be useful inputs to the centennial update of his biography, but really just to catch up. It was these unscripted asides, his inviting trust, that I felt most privileged by. I suppose biographers come in through some special door, and with Wash, that door always seemed open.

Last July I received an envelope from Wash, and even without opening it I could feel that it contained a pen inside. “Dear Butch,” said the accompanying note, “This is the only pen that I have come across which may be new to your library. Just note the owl at the head of the pen. Sincerely, Wash.” It was a ballpoint, but I didn’t mind—owls (and turtles) were his trademark avatars.

His generosity was well known, but it was never the showy or sentimental kind. He believed above all in the capability of the poor to learn and to lift themselves up with a little help. Despite the American citizenship he had to accept in a time of war, he thought and acted as a true global Filipino.

When he passed away last week on a plane above the Pacific—bridging the two shores he knew best, and still on the job at 96—I was requested to draft an obituary, and I replied, choking, that it was going to be my honor. It was the first—and, almost certainly, the only—time I would shed a tear for someone I wrote about.

OUR THREE-MONTH American sojourn has come to a close, and by the time you read this we should be back in Manila, a bit wobbly in the knees but glad to be home. I’ve gained back too much weight—the price to pay for all that scrumptiously greasy diner food and the cold spells that excused me from my daily walks—and I’ve begun to miss my morning tinapa and my suppertime tinola. But I’ve hit my research targets and more, and am eager to hunker down to writing the book that should come out of all this. I know that in a couple of weeks this vacation will be another happy memory, and I’ll be stuck in Christmas traffic on EDSA, sweltering and muttering why the heck I didn’t stay out there for another month or two.

Before that happens, let me thank some very fine people we met during this visit, which apart from the work was marked by new friendships made, existing friendships strengthened, and old friendships revived. I’ve already thanked my interview subjects in a previous piece, but there were others behind the scenes who made this particular journey pleasant and memorable. They include Sonny and Ceres Busa, Nomer and Camille Obnamia, Erwin and Titchie Tiongson, and Jun and Myrna Medina.

They may just be names to those who’ve never met them, and indeed they’re not the kind of A-listers you’d find in the glossy magazines that make virtual libraries of Metro Manila’s beauty salons. Even among Filipino-Americans, just a few names keep recurring in the social registers, either titans of industry or doyennes of fashion—leading one to wonder, where’s everybody else and what are they doing? Surely the rich and famous have no monopoly on everything that’s interesting and important? So let me introduce these friends to the world at large, by way of celebrating the non-celebrity whose quiet deeds lend substance to the sparkle of those better known. 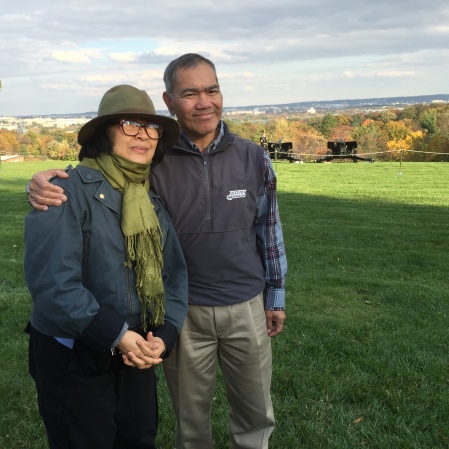 Sonny and Ceres hosted us twice at their postcard-pretty home in Annandale, Virginia and introduced us to the satisfying simplicity of Ethiopian food. The Waray-born Sonny had been a US consul in Addis Ababa, among other places, and his hilarious but spot-on insights into the American mind enlivened our every conversation. Ceres helps oversee a caregiving company for seniors in Virginia, a job eased by her patience and cheerful disposition, of which Sonny is luckily the prime beneficiary.

Nomer had been born in Sampaloc, Quezon and joined the Navy, where he met Camille in Hawaii; they’ve settled down in Columbus, Ohio, and our friendship began in the most unlikely circumstances. A committed conservative, Nomer had responded sharply to a column I wrote here years ago on artistic license, and our email conversation turned into a more gentle exchange of ideas and gestures. An expert in government procurement, Nomer had freely offered his counsel to our agencies and opinion-makers many times on ways of curbing corruption, but much to his dismay, his letters didn’t even merit the courtesy of a reply; I sadly felt obliged to tell him why. He and Camille took us into their home in the American heartland, where again I was reminded of the complexity and yet also the civility of much of American society, the challenges of Ferguson notwithstanding. 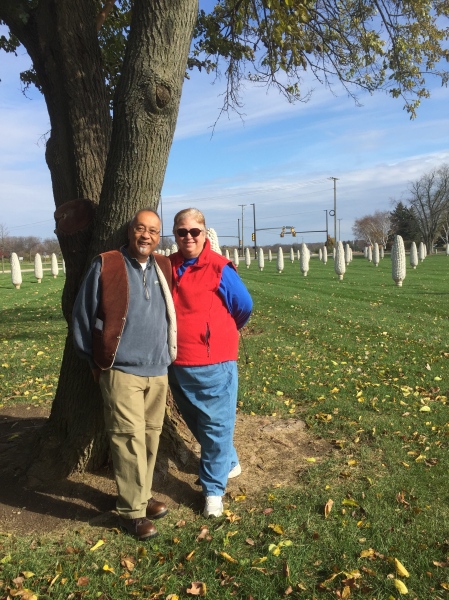 As I wrote in this column two weeks ago, Eric and Titchie showed us, through their documentation of the Filipino presence in the capital area, that remembering the past need not be the preoccupation of the old, but has to be a continuing project for future generations to appreciate. A freelance journalist who’s been recognized for her work, Titchie wrote a fascinating article (http://www.oovrag.com/essays/essay2013b-3.shtml) about how a pretty stretch along the Potomac River was inspired by the Luneta, thanks to First Lady Helen Taft, who wanted the new park to mimic what she had seen in Manila, where her husband had served as Governor-General.

Jun and Myrna Medina are old friends from the early 1970s, married four days after Beng and I got hitched. When I met Jun after being released from martial-law prison, he literally emptied his wallet for me, and later helped me get a job, a favor that in turn allowed me to propose marriage to Beng. Jun had also been a newspaperman and a fellow activist before martial law, but what many of his friends didn’t know was that he had eagerly volunteered to join a group of cadres bound for the Visayas, only to be turned down because his Capampangan origins would have marked him instantly as an outsider and gotten him killed (as, tragically, would befall everyone else in that posse). Another spin of the wheel of life took Jun to America, where he and Myrna have devoted themselves to their charismatic ministry. I hadn’t seen Jun in at least 20 years—only to discover that the Medinas had been living barely ten minutes away from my sister’s place in Centreville, Virginia, my virtual second home.

Of course, let me add our family—Elaine and Eddie Sudeikis in Virginia, Jana and Senen Ricasio in New York, and Demi and Jerry Ricario in San Diego—to our list of hosts and sponsors (led primarily by the Philippine American Educational Foundation, the Fulbright folks). Other friends new and old like Mitzi Pickard, Reme Grefalda, Susan Brooks, and Moira Madrid-Spahr also contributed their time and attention to my visit. 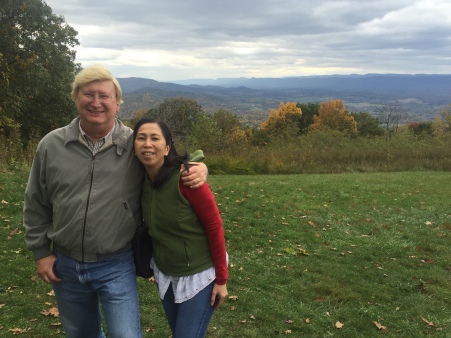 I was hosted by the George Washington University, and from GWU I have to thank English Department chairman Robert McRuer, creative writing program head Lisa Page, and old Manila hand and law professor Ralph Steinhardt. Ralph helped prosecute the Marcoses in Hawaii for human rights abuses when he was a young lawyer, and I’ll always remember his story about the response of a plaintiff whom he warned against the rigors and the costs of fighting the Marcoses: “I just want to be believed.”

In the end, that’s all we can hope for, and may my forthcoming book be worthy of all these good people’s graciousness and generosity.