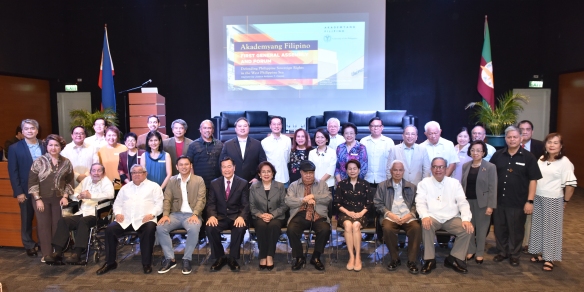 EXACTLY A month ago, in the auditorium of the newest campus of the University of the Philippines at Bonifacio Global City, an event of great historical significance took place—the first general assembly and forum of the newly organized Akademyang Filipino, the first Philippine academy of arts, sciences, and the professions.

Conceived together by National Artist F. Sionil Jose and the late Sen. Edgardo J. Angara, the independent and non-partisan Akademyang Filipino was set up for three main goals:

“To recognize and bring together, in one chamber, the best of Filipino minds and spirits, accomplished representatives of the Filipino arts, sciences, and professions, imbued with love of country and the spirit of service to the nation;

“To uplift the material and moral lot of the Filipino people, to define, promote and defend the best interests of the Filipino nation, and to find and nurture new sources of hope and inspiration for the Filipino youth; and

“To provide a forum for the rational discussion of pressing issues and the exploration of pathways to a better future.”

In other places, such academies have had somewhat more focused roles. The venerable Academie française is devoted to being the authority on the French language; the Taiwan-based Academia Sinica covers a broad range of disciplines but supports advanced research.

In the United States, the National Academies of Sciences, Engineering, and Medicine is the collective name of the three honorific academies in those disciplines. Since its founding in 1863, these national academies have pledged “to marshal the energy and intellect of the nation’s critical thinkers to respond to policy challenges…. When faced with a complex question, we bring together experts from across disciplines to look at the evidence with fresh eyes and openness to insights from other fields. These study committees survey the landscape of relevant research, hold public meetings to gather information, and deliberate to reach consensus, which results in a shared understanding of what the evidence reveals and the best path forward.” Studies and advice by the National Academies have covered such diverse topics as fixing the Hubble telescope, preventing wrongful convictions, and preparing young Americans for careers in science and engineering.

This is probably closer to what the Akademyang Filipino aims for—to repeat, “a shared understanding of what the evidence reveals and the best path forward.”

In our first forum, Justice Carpio gave a masterful presentation of the history of China’s claims to Philippine territories in the West Philippine Sea, using ancient maps to prove—as a good lawyer might be expected to do—the paucity of those claims. A panel of Akademya members and West Philippine Sea experts—De La Salle University’s Renato Cruz de Castro, UP’s Jay Batongbacal, and author and columnist Richard Heydarian—discussed the current Philippine government stand on the disputes was and warned against a policy of appeasement and surrender.(The DFA was invited but apparently declined to send a representative to the forum.)

A smaller group had met less formally for the first time in February last year, when Sen. Ed Angara was still around and very much involved in getting the academy off the ground alongside NA Frankie Jose. It still called itself the “Academia Filipina” then, but later changed its name in deference to an existing Academia Filipina de la Lengua Española. 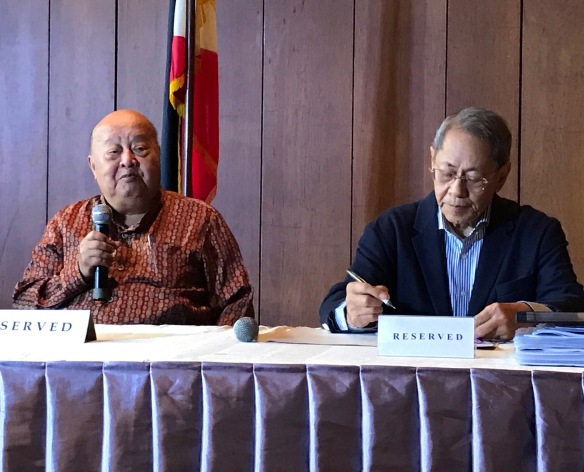 This was the first but certainly not the last of our forums, and we intend to have several of these large assembly-type meetings every year for issues of great and general significance, concerning not just politics and business but also science and the arts. We need to create new interdisciplinary points of intersection and interaction. Our artists and scientists hardly ever get heard by our policy makers. With all due respect to the lawyers and the businessmen, they too might benefit from the insights of these other disciplines, so that we do not get mired in the kind of cynical pragmatism that drives too many of our decisions today, and remember to value such abstractions as beauty and logic.

The dues we collect will help support a very small back room and also our future activities. Sponsorships are of course needed and welcome, for so long as they do not compromise the independence of our association.

On that note I would like to thank, once again, aside from our speakers, our sponsors for the Akademyang Filipino event, including the UP College of Law, whose Dean, Fides Cordero-Tan, also happens to be the Executive Director of UP-BGC. I’d also like to thank the National Commission for Culture and the Arts, Sen. Jun Magsaysay, and other donors who prefer to remain anonymous for their assistance. My special thanks go to our Executive Director, Ms. Jette Jose Bergkamp, and my UP team from the Padayon Public Service Office and the Media and Public Relations Office. 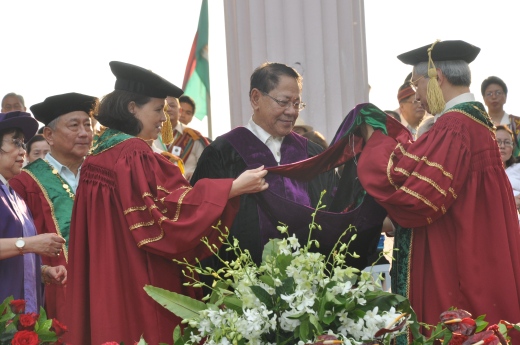 I’VE BEEN privileged to work with some of the most accomplished and interesting personalities in Philippine politics and business on their biographies—the accounting pioneer Washington SyCip, the brilliantly rebellious Lava brothers, the Marcos-era tycoon Rudy Cuenca, and the political maverick Tet Garcia, among others. This Wednesday, April 29, another biography I wrote—Edgardo J. Angara: In the Grand Manner, published by the University of the Philippines Press—will be launched at the Manila Polo Club, from 3 to 6 pm, and it’s focused on a man who will be remembered for many things in many ways, whose impact on our political, economic, and social life has been far greater than the headlines alone would suggest.

The man now known by many as SEJA (for Senator Edgardo J. Angara) courted consternation and even disdain from many people, including some old friends, when he stood by the embattled Erap Estrada into the last days of the latter’s doomed Presidency. He also confounded many of his own followers when, after leading the opposition, he signed up with Gloria Macapagal Arroyo’s senatorial ticket in 2007. The biography addresses those issues, and more—the Apeco issue in his home province of Aurora, for example, involving the conversion of land claimed to have been the ancestral domain of the Dumagats into an economic zone.

It also sheds light on some little-known but key moments in our political history, such as the peace agreement that Angara was able to negotiate, when he was Agriculture Secretary, with communist rebels in Negros. “That agreement continues to hold,” Ed told me. “It’s the longest-lasting agreement the Philippine government has achieved with insurgents.” The biography also narrates how Angara, still as Agriculture Secretary, was just about to conclude a rehabilitation plan for Camp Abubakar, in close consultation with the MILF leadership. “It would have been a historic breakthrough,” said Angara, “but it was opposed by the military, and ultimately dropped by President Estrada.”

My favorite portions of the biography have to do with his days as UP President, when he threw that famously independent and historically dissident institution into a tizzy by coming in from the cold and applying corporate governance to the academe.

Rumored to have been President Marcos’ choice for the UP job—something Angara strongly denies, attributing his selection to the support of the late Onofre D. Corpuz—Angara stepped into Quezon Hall from out of the blue, “the blue” being ACCRA, the law firm he had set up with some of the brightest young lawyers of his time. Angara would recall that “OD asked me to meet with him in the coffeeshop of the Mandarin. He brought up the UP presidency with me, and I told him that while it was certainly a great honor to be considered for such a lofty academic position, I simply wasn’t prepared for it. My only teaching experience was as a lecturer for two semesters, right after I had returned from Michigan. The School of Business Administration was looking for someone to teach corporation law, and I drove my Beetle from Makati to Diliman to teach my classes.”

In the end, the BOR elected the 46-year-old lawyer, and he lost no time wielding the broom—reorganizing and trimming down UP’s tangled and bloated bureaucracy, revamping its academic programs, and securing fiscal autonomy for the university. Some of these measures inevitably made him enemies, but also unlikely allies, such as the staunchly leftist professors Francisco Nemenzo and Roger Posadas.

Known to his colleagues as an irrepressible jokester, University Secretary Mart Gregorio probably wasn’t joking when he recalled a moment when he entered the campus with Angara, who observed a virtual menagerie of farm animals along University Avenue. “He asked me, ‘Why are there so many animals at the university entrance?’ I told him, ‘Ah, Mr. President, that’s the College of Veterinary Medicine. In other universities abroad, you might be welcomed by a beautiful arch or statue. Here we have cows, chickens, and goats.’ And then he asked, ‘What’s that other college there?’ I said, ‘That’s the College of Fisheries, sir.’ He said, ‘Fisheries—but we don’t even have an aquarium here!’ And right there, he said, ‘I think that should be transferred to UP Visayas.’ And it was. ‘Vet Med should be transferred to UP Los Baños.’ And it also was.”

I’m biased, of course, being a UP professor and former university administrator myself, but that’s the kind of anecdote that made this book a pleasure to write. It was also the realization that I was talking to the man responsible for many landmark bills that made a key difference in my own life, among many other millions of Filipinos—the Senior Citizens Act, PhilHealth, the Generics Act, and the creation of the Commission on Higher Education and the National Commission for Culture and the Arts, aside from laws on Agricultural and Fisheries Modernization, the Free High School Act, the creation of TESDA and of a host of financial and educational reforms.

He has been a strong supporter of culture and the arts, and lately has been an avid Hispanist, but Ed’s emergence as a cultural champion came as a surprise to many people—even to Ed himself, who acknowledges that “I don’t even sing or dance, much to the frustration of my wife. I don’t do any artistic work.”

From Con-Con delegate, corporate lawyer, and UP President to senator, Senate President, Agriculture and Executive Secretary, SEJA’s life has certainly been one of the most storied hereabouts. “I will be the first to say that it has been a far from perfect life, fraught with challenge and accident,” he says in his foreword, “but in my 80th year I can only still feel privileged to have lived it the way I did. The title of this book may sound rather immodest—it draws on Justice Holmes’ admonition for the law to be taught and therefore practiced in the grand manner—but I would like to believe that in the end, this is the only standard we can be measured by, as we seek to reshape society itself and our nation’s future.”

See you, I hope, at the book launch.