IN MY fiction writing classes, until I recently retired, I often began the semester with what I thought was a generous offer, or actually a challenge: I would give flat 1.0 to anyone who could submit a well-written story with a happy ending—not some contrived finale with God scooping the hero out of harm’s way on the last page, but something the reader could believe in, something that would give reason for hope in the human condition, or at least the human future.

How many students, do you imagine, found their way to that happy ending and to that glittering 1.0 all these years? None, not a single one. It wasn’t for lack of talent—I did hand out a few 1.0’s for other reasons—but it seems that a believably happy story has become the hardest thing to write in these times in which the political has compounded the personal. As my students’ stories keep repeating, people feel trapped in situations and relationships that diminish their self-worth. In the age of the Internet, which is supposed to connect strangers instantaneously across the planet, many feel lonelier than ever, unable to keep up or blend in with the crowd, which always seems made up of happier, smarter, and richer people.

Everyone says they want the truth, which others—including governments and peddlers of this and that—are laboring to obscure, but when they do find it, they can’t deal with the consequences. The only ones smiling are those in power, who feel they can get away with murder, because no one else is strong and whole enough to stand up to them. As someone else sagely noted, despots feed on people’s despair.

In recent conversations over coffee with friends—chats overcast by a spate of deaths in the literary family and by a growing despondency over our political situation—the question was inevitably asked: so what can we do? How can we recover and offer hope, and find some happiness amidst hardship and despair?

To cut a long and complicated discussion short, I’ve resolved that, at the minimum, my aim will simply be to survive all the bad people and the bad stuff. I shall keep myself healthy and sane, and do things that not only give me personal pleasure—an admittedly selfish but vital element of happiness and well-being—but also help others, which can yield even greater satisfaction, as you find meaning in the many.

I know that that’s easier for me to say and to execute, as a 65-year-old retiree who’s been through enough, has hit most of his life goals, and could croak tomorrow without too much commotion. Easier, that is, than a 22-year-old with a troubled home life, a shaky job that barely pays for gas and fares, and the crushing pressure to conform and be another nobody.

But it’s certainly true that for my generation, we were ever aware that the world was larger than ourselves, and that it didn’t owe us a living, so we had work and fight for everything, and while we bitched like hell about the general crappiness of life, we were thankful for every scrap that fell our way, and prepared to fight and bitch some more the next day. We sought out kindred spirits and sang songs together, finding solace in community and in the sobering realization that many others had it worse. We found relief from our personal troubles by relieving the greater needs of others.

That may all sound peachy and preachy, platitudes that roll smoothly off the tongue forty or thirty years after one’s last rolled papaya-leaf cigarette or shot of watery gin. But it’s true: we tried to be as strong and as tough as we could, individually, but didn’t mind admitting to a soft spot here and there, maybe even turning that into an affectation (dare we say an art) like poetry, or music, or, for others, activism and public service. Whatever we had, we shared with an audience. And if sometimes we didn’t even get so much as a thank-you or a polite couple of claps, well, we could always say we belonged to a cool and tight fraternity of the underappreciated, like Poe and Baudelaire. Misery loves company, but we didn’t just stay miserable—we made something out of it, something even approaching bliss.

So in line with my new mantra of starting local and starting small, Beng and I will devote ourselves to family and community, beginning with our apu-apuhan Buboy, who’ll turn three this month, working with his parents to ensure that he’ll get a good and sensible education while we can help it—not just in school, but around the house and at the dinner table. I’ll be telling him things like “Respect food, and finish what’s on your plate. Eat fish and vegetables. Love cars—toys or real ones—but respect pedestrians. Respect working people, your parents most of all. Do things yourself. Do the right thing even when no one’s looking, and even when everyone else is doing wrong.”

There’s reason for hope if we each do the right thing in our own lives, and not yield too easily and too soon to the clamors of submission and self-annihilation.(There’s always somebody else who deserves to go before we do.) We are not alone. 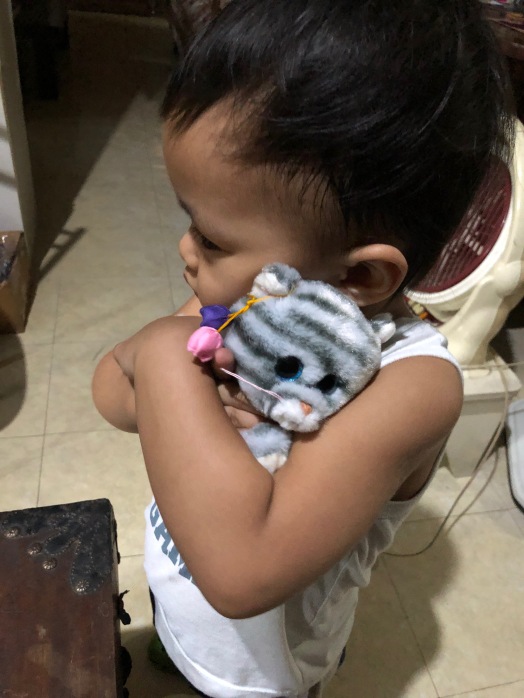 FOR REASONS still not too clear to me, since I had a great relationship with my late Dad, I never really wanted a son, and heaved a huge sigh of relief when Beng popped out a baby girl named Demi 44 years ago. Demi turned out to be everything we could wish for—bright, caring, and generous, an exemplar at her job in a major hotel in California, where she lives with her husband Jerry, another proud addition to our small family.

I may not have minded a grandson, but The One Who Knows Better decided that we were all going to be happier by ourselves, so Beng and I and Demi and Jerry have enjoyed our foursome, traveling together whenever possible and achieving what we could in this life without worrying too much about the future.

We couldn’t have imagined that in our later 60s, Beng and I would have to learn grandparenting a boy—a two-year-old named Buboy, the son and second child of our faithful housekeeper Jenny and her husband Sonny, who have been living with us for many years in our campus home. Beng and I thought that everyone could work better if we kept the family together instead of stranding half of it in faraway Bicol. So Buboy was born here, and has known nothing but our large yard and the falling mangoes, treating our noisy guard dogs as his friends.

Buboy wakes us up in the morning by banging his tiny fists on the door, and when no one opens it, he turns the knob himself and barges in with a ta-da smile. He likes to climb up our bed, which he thinks is his playground—and a trampoline.

We speak to him in Filipino, just like we did with Demi—we’ve never believed in raising a kid in a foreign language, which school and society will take care of at some point—but he’s picked up a few favorite English words on his own: “no” (often used as in “Nononono!”), “fish” (“pish,” the Pinoy way), and “shoes” (which he can get picky about). He has his own plastic glass, and we make a toast and gulp our water down together, like drinking buddies.

Breakfast is followed by half an hour of cartoons, but what he really wants is for Beng to open his favorite book—one about a forest whose creatures are endangered by bad people.

I’m Tatay and Beng is Nanay. All dogs are Wowwow. All cats are Mingming. All cars and trucks are Peepeep (and he knows how to run back to his Mama when he hears a Peepeep rumbling down our street). When I’m away on a trip, he points to planes when they fly overhead, although I don’t know where or how he made the connection. A true tyke of his generation, he’s pretty good at figuring out how knobs and buttons work—twist this, press that.

When you ask him how old he is, he raises his two pointy fingers—he can’t make the V sign yet. What happens when he turns three? We’ll cross that bridge when we get there. He likes to swipe three colored poker chips from my bedside, and we’re using those to get him to count to three. Some folks expect their toddlers to do calculus, speak French, and play the piano; this boy will not be rushed by us into any prodigious feats, although we see him absorbing knowledge like a sponge. It’s enough that he knows how to do the manowith every elder he meets, to pick up things that fall on the floor and put them in the wastebasket, and to return objects where he got them from. He’ll soon learn “po” and “opo.”

His Ate Jilliane is a special child, years older but just as innocent as he is, and he seems to sense her specialness. They fight, of course, like anything over anything, but he can be sweet and gentle, offering her a share of such goodies as he can finagle from us. He probably doesn’t yet understand what we keep whispering in his ear, trusting in subliminal suggestion to work its magic: “Buboy, be good, be smart and study hard, so you can take care of Ate when you grow up.”

As empty nesters and with our own dear daughter well cared for, Beng and I have pledged to see to it that Buboy gets a proper education, in school and at home, for as long as we can help his family help themselves. Other retirees adopt causes and NGOs; he will be our mission, of course with his parents’ cooperation and support.

When our friend Julie visited recently from the States and had a few pesos left over, she bought a stuffed cat to give to Buboy, which he promptly embraced and named, of course, Mingming. It does take a village to raise a child, but it doesn’t take too much to make one happy.