IT WAS a millennial geek’s fantasy come true, except that it happened to a doddering senior with the good luck to be in the right place at the right time. As I reported last week, Beng and I were in the US last month to attend the launch of the foundation behind the prospective American Museum of Philippine Art (AMPA) in Los Angeles, and also to visit our unica hija Demi in nearby San Diego, where she’s been living and working with her husband Jerry for the past nine years.

We save up for these visits, which usually take place every year sometime in October during what used to be our semestral breaks. But with the shift in our academic calendar to the international (okay, the US) model, we timed this year’s trip for July in conjunction with the AMPA event, the sum of which was that we found ourselves in Southern California during the third week of July.

And what’s so special about that week—one marked by 90-degree-plus temperatures, water shortages, and brush fires in California’s sunbaked hinterlands? Well, as every pop-culture-savvy 30-year-old from Pandacan to Pasadena knows, it’s the time when Comics Convention International—better known as Comic-Con—takes place in San Diego, where it began 46 years ago.

So what exactly is Comic-Con, and what’s all the fuss about this annual pilgrimage attended by hordes of Earthlings, as well as presumptive superheroes and extraterrestials? It’s an exhibition, a convention, an academic conference, a parade, a pageant, a marketplace, and a film festival all at once—the world’s largest and best-known pop-cultural mecca.

You might say that at 62, I had no right to be there at all, and I wouldn’t have argued, even if I’d been a staunch DC Comics fan in the ’60s who battled the Marvel masses in lunchtime chalk fights. I could easily think of half a dozen people just in my department in UP who would’ve given their right arms to be in my place, having followed every twist and turn of “Game of Thrones” and having memorized the names of every Jedi Master and Sith Lord in the Star Wars universes (the official and the expanded). These guys (and gals) take their fantasy seriously, and some of them go on from buying every issue of Batman to writing ponderous academic essays for such tomes as It Happens at Comic-Con: Ethnographic Essays on a Pop Culture Phenomenon, edited by Ben Bolling and Matthew J. Smith (Jefferson, NC: McFarland & Co., 2014).

In his foreword to that book, Matthew Pustz would recall that “When I got off the trolley in downtown San Diego, I knew just how to find it: follow the guy in the Green Lantern t-shirt. After a short walk, there it was—Comic-Con International, with the huge convention center sitting in the sun. Waiting to enter were tens of thousands of fans—all with their own strategies for making the most of what has become one of the largest popular culture events in the world. This was the summer of 2007, and I had traveled to San Diego all the way from Boston to attend something that I had dreamed about for a long time. I had attended comic book conventions before, in Chicago, Columbus, Ohio, and St. Louis. But San Diego was different, bigger, more important. This was San Diego—the Super Bowl of comic book conventions—and I was on the comic book fan’s holy pilgrimage, the trip that all fans must make at least once in their lives. This was the Gathering of the Nerd Tribes, Fanboy Woodstock.”

“Comic-Con is a fan event, but it is also a money-making extravaganza where all manner of creators, artists, and corporate owners of media products can sell and promote them to their exact target market. And this target market is one that can be virtually guaranteed to take the ‘buzz’ of Comic-Con back with them to to Iowa or Boston or Tokyo so they can ‘sell’ those products to their friends back home. Comic-Con is the ultimate merging of culture and commerce, and that makes it the perfect place to study how popular culture works in the twenty-first century.” 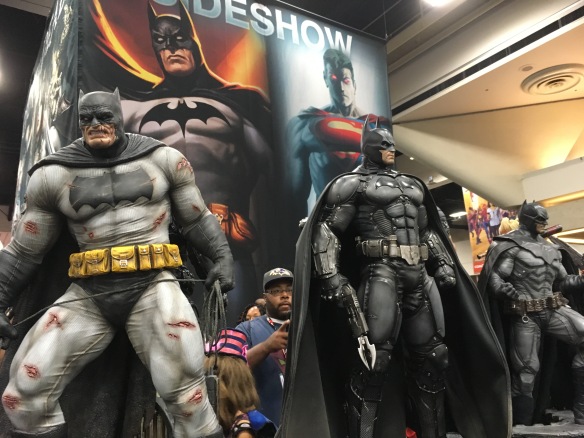 While there are many other fantasy and pop-culture conventions—Dragon Con, for example, is a big cosplay event that takes place every year in Atlanta, Georgia on Labor Day weekend—Comic-Con is a San Diego original, run by “a nonprofit educational corporation dedicated to creating awareness of, and appreciation for, comics and related popular artforms, primarily through the presentation of conventions and events that celebrate the historic and ongoing contribution of comics to art and culture.” WonderCon, a comic-book-focused event, is held in Los Angeles.

The first Comic-Con—then known as the Golden State Comic Book Convention—was held in August 1970 at the US Grant Hotel (the grande dame of San Diego hotels, where our daughter Demi works), but it’s since moved on to the sprawling San Diego Convention Center (where Hall H alone, reserved for the biggest events, fills up its 6,000 seats) and to nearby hotels. 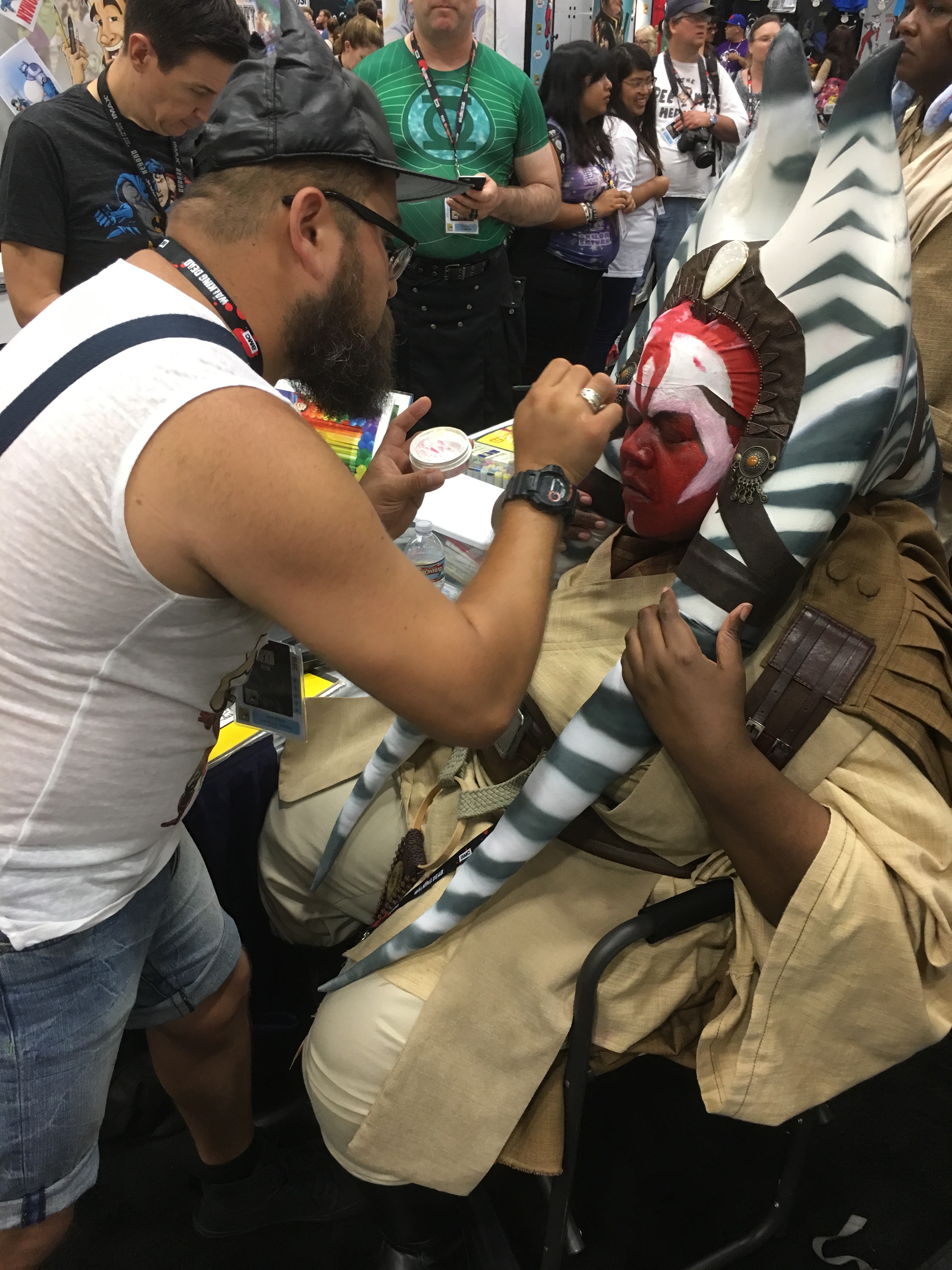 Over its four-day run, Comic-Con 2016 was projected to draw 130,000 attendees from all over the world (and the galaxy), each of whom was also likely to spend at least $1,000 in San Diego, making it the city’s top annual grosser. Movie stars fly in to promote their projects and some celebrities like Conan O’Brien have made Comic-Con a regular item on their calendar.

Getting into Comic-Con used to be a matter of flying into San Diego and walking in through the convention door, but not anymore. According to the organizers, “Although we strive to make attending our show as easy as possible, obtaining a Comic-Con badge can require the persistence of Superman, the patience of a Watcher, the ingenuity of Tony Stark, and the readiness of Batman.” It’s hard to think of any other conference where the rules include the following:

Tickets to Comic-Con were sold out months ago, as were all hotel rooms in San Diego, at peak prices (“Comic-Con attendees book their rooms for next year before they leave,” Demi told us.) You don’t really buy a Comic-Con ticket but a “badge,” and to get a badge you have to pre-register online for a membership ID, with which you can then apply for a badge using a code that entitles you to a slot—well, you get the idea.

So how exactly did we get in? All I’ll say is, it pays to have a daughter in a hotel in San Diego in July. It wasn’t really in our vacation plans, but Demi decided to give a pair of seniors a special treat one morning by announcing that she could get the three of us into Comic-Con. Were we interested? You bet we were!