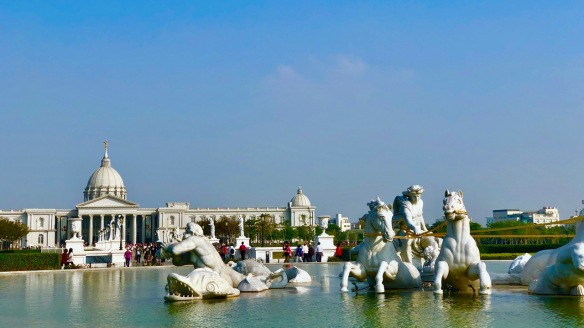 MY RECENT forays to southern Taiwan—the first to Tainan, and the second to Kaohsiung—reminded me that while we Pinoys love to chuckle and even snicker at how the Chinese (among others) mangle English, the economic and technological leaps they’ve made (using their own language, let’s not forget) are no laughing matter, unless you’re a Chinese entrepreneur or engineer on his or her way to the bank.

This occurred to me as I was flipping through the local travel and leisure magazines in my hotel room in Tainan between sessions of the academic conference I was attending. Typical of the prose was this advertisement for a resort on the island: “Join the exclusive equestrian sports of the aristocrats, so that parents can easily experience the price of the people, the wonderful and rich itinerary, you can easily lick the children without going far! Let you play and don’t want to go home anymore.”

I could imagine some snooty Filipinos, more English than the English, rolling on the floor and thinking that people who write that way can’t possibly go anywhere, but I would’ve liked to bring those people to the exhibits downstairs showcasing Taiwan’s state-of-the-art research in biomedical engineering, solar power, and materials science, including an interesting project aimed at improving your basketball skills through “a virtual reality basketball tactic training system.”

I don’t know how close that project will bring Taiwan to a world basketball championship, but I could see, from the presentations I was listening to, that they were going all out to become world-class champions in research and development. Our host, the National Cheng Kung University, had almost US$145 million to spend on R&D in 2017, mostly from the government. (That’s about half of the University of the Philippines’ budget for everything.)

Thankfully, we did have a break from all the S&T reports on the last day of our Tainan conference, and we were given a choice of tours between visiting a museum or an aquaculture farm. Now, I love fish as much as you do—it’s often the first thing I eat in the morning—but I wanted to have a closer look at Taiwan’s culture and history, so I hopped on the museum bus. What we saw was, well, anything but Taiwanese—unless you take the act of presenting the thing itself as an expression of Taiwan’s place in the world today.

Our destination was the Chimei Museum, named after the company that’s now the world’s largest maker of ABS resin, which goes into the making of popular plastics such as computer keyboards, auto body parts, and bicycle helmets.

The Chimei Museum is an imposing if rather odd homage to Western art and artisanship. Located on the outskirts of Tainan, it was built in 1992 by the billionaire industrialist Shi Wen-long. Now 90, Shi never got a college degree. But he’s also a passionate amateur violinist who’s played with Yo-yo Ma. That, plus his personal fortune, has allowed him to put together a stunning collection of vintage musical instruments—including priceless violins by Stradivari, Guarneri, and Amati—that are now on display at the museum, in an exhibition that recreates the workshop of a master luthier or violin maker.

The Chimei’s other showstopper—aside from the Rodin gallery and some masterpieces of French realism—is its exhibit of ancient arms and armor, from the time of the Greek hoplites and medieval knights to the Japanese samurai and English crossbowmen. I have to admit to a boy’s fascination with weaponry, and having visited many of the world’s best museums, I’d have to say that the Chimei’s collection was comprehensively fearsome. These were the real things, folks, not cheap or 3-D printed replicas.

Indeed, there’s hardly anything Chinese in the design of the Chimei or in its exhibits. The large, neoclassical, Corinthian-columned museum—set off from the street by a long walkway flanked by tall statues of the Greek gods and goddesses—could have stood anywhere in Europe or the US, and comes off as a statement, as if to say, “We could have given you the chinoiserie you expect, but we chose to acquire and to present the best of the West.”

And I can’t let this column end without mentioning the other surprise I came across in southern Taiwan, in the port city of Kaohsiung, where I also attended a conference on distance education. Our host, Dr. Eing-Ming Wu, made use of a free afternoon to introduce us to the city in a most unconventional way—by giving us tickets to take the I-Ride, Kaohsiung’s so-called “flying theater”—kind of like a rollercoaster in an Imax—powered by the homegrown Brogent Group’s 3D technology, which it has exported to Hollywood and other amusement capitals worldwide. If I needed to be impressed by Taiwan’s engineers, this was the best way to do it, screaming my head off, feet dangling in the air, as we swooped over a Buddhist temple then plunged into the ocean.

While travel to Taiwan remains visa-free for Pinoys, I’m definitely returning as a tourist to Kaohsiung with my wife Beng, if only to have her  experience the exhilaration of the I-Ride and maybe take her on a cruise on the Love River, feasting on the sweet giant atisuntil our eyes bulge. As they say, in Taiwan, “you can easily lick the children without going far”—whatever that means, it sounds like fun!