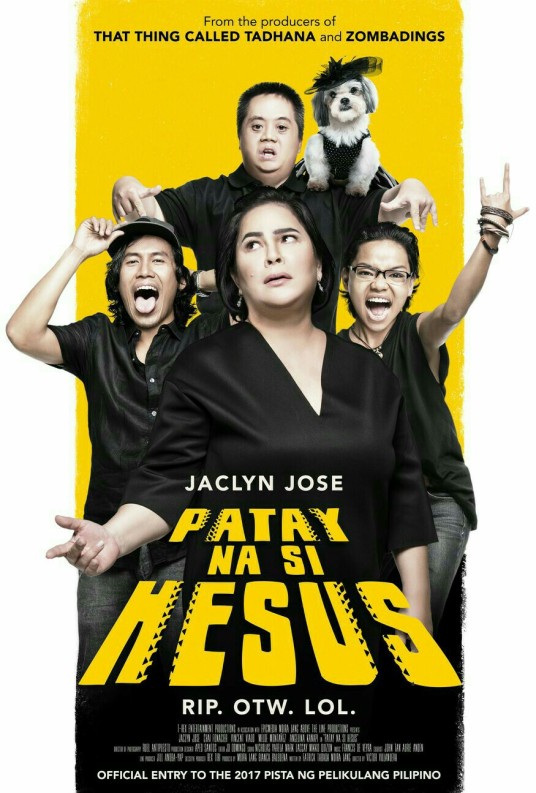 LIKE MANY Filipinos, I really should see more locally made movies than the Hollywood and Netflix confections that have become our staple entertainment. That statement’s even more ironic in my case, having scripted about two dozen movies, mostly for the late Lino Brocka, between 1978 and 2003.

I missed out totally on this year’s Cinemalaya offerings because of a toxic schedule at work—I tried to catch Respeto on its last day only to find all the tickets sold out—so I made sure to make time for the Pista ng Pelikulang Pilipino the following week. I suppose I more than made up by managing to see four of the PPP entries over as many days: Patay Na si Hesus, Pauwi Na, Birdshot, and Hamog, in that order.

I might have chosen these movies because I’d heard good things about them, but I also wanted to see how they represented the Filipino family—for me an eternally fascinating subject, even from the days when Lino and I explored its complexity in such films as Tahan Na, Empoy and Inay. Filipino society (and politics, for that matter) is nothing if not about family, which seems inextricably connected to our struggles for survival—we survive for family, and also because of it.

Directed by Victor Villanueva, Patay Na si Hesus has a long-estranged wife and now a widow, Iyay (Jaclyn Jose), drive her ragtag family in a minicab from Cebu to Dumaguete to attend the wake of her husband Hesus. Along the way and at the wake itself all manner of misadventure happens: a nun liberates herself, a lesbian relationship crumbles, a boy with Down Syndrome seems to get lost but actually finds his way, a coffin collapses, and a dog dies (curiously—and sorry for the spoiler—the three dogs in three of these movies all die). The dog’s demise has all the characters wailing and shedding the tears they couldn’t muster for the absent dad.

Pauwi Na is another family-on-the-road movie, with Mang Pepe (Bembol Roco) and his wife Remy (Cherry Pie Picache)—crushed by eking out an existence in the slums—transporting their brood back to the Pinoy fantasy of a paradaisical province, not by train or bus but by pedicab. Director Paolo Villaluna’s project is a long and laborious journey that ends in tragic loss, but the family’s dogged faith in a better life elsewhere infuses the film with both power and poignance. Mang Pepe is every Filipino tatay who’s gone the extra mile—many miles—to put food on the table and bring a smile to his family’s faces. (I’ll admit to having teared up remembering my own father, a highly intelligent man who wanted to become a lawyer but never quite got the right breaks, and who at one point had to work as a jeepney barker just to tide us over.)

Directed by Mikhail Red, Birdshot juxtaposes the coming-of-age of young Maya (Mary Joy Apostol) with the brutishness and brutality of political power in the rural hinterlands. The endangered eagle that she shoots dead is precious, but it’s hardly the most grievous loss the place suffers, although there’s little official interest in investigating the bigger crimes.

Hamog is set in another jungle—the bowels beneath and around Guadalupe Bridge, in the city’s slums and tenements where street urchins become almost feral in their predation. The movie is actually a diptych, an exploration of two lives—Rashid’s and Jinky’s—and it opens doors to what to most Filipino viewers would be unusual relationships (a Muslim man with several wives, a woman with a husband and a lover under one roof). While doubtlessly powerful, the narrative needed, I felt, a bit of rounding out, even assuming that its director Ralston Jover precisely wanted to make a point of leaving ends loose, as life often happens.

I’ve already mentioned the 100% mortality rate for canines in these scripts; another interesting parallel was the appearance of phantoms—Jesus Christ, a shadowy forest figure, Supergirl—in three of the films, which seemed more organic and necessary in Pauwi Na but too deliberately cinematic a touch in Birdshot and Hamog.

Their minor flaws aside, all four movies were well worth my time and money, and I was glad to see full houses for a couple of them, and appreciative audiences who clapped as the credits rolled. For someone who’s been out of the film industry for a while, it was heartening to witness such a wealth of new young talent—both on the directorial and acting sides (Chai Fonacier, who appears in the two road movies, has a great future ahead of her)—emerging to take over from the likes of Brocka, Bernal, de Leon, and the other masters of that generation. If I were to hand out my own awards just among these four, I’d give the top prize to Patay Na si Hesus, for its refreshing quirkiness and dark comedy.

What struck and impressed me from a writer’s perspective was the non-linearity of the plots and the moral ambiguity of the characters and situations—a far cry from, say, Brocka, in whose movies it was always clear who the villain was, and why.

Most important, of course, was to see how the Pinoy nuclear family had morphed in response to changing times—to nontraditional sexuality, to absentee parents, to the pressure to survive—and yet also to see the love and affection in it undiminished and even intensified by need. Bravo!