I’M GOING to turn over most of my column this week to a colleague at the UP Institute of Creative Writing, the playwright and essayist Luna Sicat Cleto, whom I commissioned (badgered is the more appropriate word, since I’m not paying her anything more than my deepest thanks) to do a report on a recent mission that she and a group of Filipino writers undertook in Hyderabad, India.

The original invitation to attend the Hyderabad International Literary Festival and organize a delegation as a “guest nation” had been sent to me, but since I couldn’t work it into my schedule, I asked performance poet and Philippine High School for the Arts director Vim Nadera to put together and lead a troupe of Filipino writers and artists. And what a delegation it turned out to be. With Vim went fellow writers Jun Cruz Reyes, Victor Sugbo, Luna Sicat Cleto, Jeena Rani Marquez, Christine Godinez Ortega, Hope Sabanpan-Yu, and Neila Balgoa. Spoken word poet Kooky Tuason also came along, as did Ifugao poet Dumay Solinggay. Dance and music were represented by Cecilia Artates and Marty Tengco. Let’s hear the rest from Luna:

“According to Dr. T. Vijay Kumar, Professor of English at Osmania University in Hyderabad, the Philippine delegation was the biggest group they had received so far, having hosted five nations since it began in 2010. The other four were Germany, France, Ireland, Poland, and Singapore.

“Dr. Kumar, alongside the novelist Pranesh Prasad, had encouraged the attendance of the Filipino writers. Prasad graced the Iligan workshop in 2013 as guest writer and also attended the Asia Pacific Writers and Translators Conference in Manila in 2015.

Since then he has felt a strong affinity with Filipinos. Prasad was happy with the performance of the delegation, saying that ‘I think we achieved our goal of creating awareness about Philippines in India, given the number of newspapers that covered your participation and all the people contact that has resulted. It bodes well for India-Philippines cultural relations.’

“Prasad’s observation was echoed by Jun Cruz Reyes, who felt that it was refreshing to read about the convergence of so many talents and minds in the festival, which was not limited to the literary field alone. Topics as diverse as politics, history, sports, and popular culture were taken up in parallel sessions. While some German industrial designers discussed the sustainable technology of chai shops, a Mumbai-based young entrepreneur talked about Instagram ruminations, while another focused on the Indian graphic novel. There were talks given by poet laureates Ashok Payjevi alongside investigative journalists like Josy Joseph and Harsh Mander, and discussions of translations of the Bhagavad Gita and Tamil stories alongside debates about the effects of the partition and human trafficking. Particiapns got to see martial-arts demonstrations of the shilambam as well as India’s latest art films. The plurality of HILF is based on its inclusive ethos: it is multilingual and multidisciplinary, and the multiple speakers—writers, artists, scholars, filmmakers, journalists, publishers—represent a wide range of creative fields. Hyderabad has been described as a ‘teeming urban masala of color and commerce,’ and indeed the city evokes the ancient prosperity of its Mughal past, alongside its twin reputation as a Silicon Valley of India.”

Luna adds that “Indeed, it is fortuitous that the Philippines was invited now, while both countries are assessing their relative positions in the global literary and cultural scene. It also became a chance to rediscover the bonds between India and the Philippines, evident in the many words from Sanskrit that are in the Filipino’s vocabulary: budhi, guro, and diwata, among others. While India has a strong tradition of writing in English because of the colonial legacy of British education, the Philippines also has a strong contingent of Filipino writers in English. India’s raucous democratic plurality in religion and politics is echoed in the Philippines’ plurality of religion, politics, cultural traditions and languages. The many languages of India are celebrated in the Hyderabad International Literary Festival, and for this year, its focus was on the Tamil language. One artist, the great Indian dancer Leela Samson, who performed in ‘Past Forward,’ said that it is about time that India listened to its many voices, and let the major languages of India be the conduits of thoughts and ideas.

“Samson’s sentiments were echoed in the Philippine delegation’s performance, aptly titled ‘Philippine Pangalay: Karmic Harvest.’ Vim Nadera strutted onstage, dressed in an all-white suit complete with an American flag tie. Channeling Donald Trump and the doomsday rhetoric of born-again speakers, he pronounced that he was dedicating his performance to the memory of National Artist Francisco Arcellana. ‘Close all open things, Lord/Open all closed things,’ Nadera intoned, appropriating Elvis’ crotch choreos with riffs from the musical Hair. The crowd was energized. He then introduced Jeena Marquez, who performed a powerful dramatic monologue based on Rizal’s epilogue in El Filibusterismo, a re-enactment of Maria Clara’s leap to death as witnessed by two civilians. Romancing Venus was the next act, which featured Tuason’s slapshock verbal performance, enhanced by Tengco’s drumming and Artate’s pangalay. But the real star of the delegation was Dumay Solinggay, who channeled the anguish of epic chanters with her poignant chorus of  ‘We must remember, we must remember…’ Solinggay did not only echo the trauma of the postcolonial subject, who may feel trapped in identities and names arbitrarily assigned, in specific situations like the call-center agents or the inevitable loss of memory in the fast pace of urban life. When she danced at the last part of her ensemble, her body resembled the paroxysm of the chanters in a trance.”

What can I say? I wish I’d been there with them in Hyderabad. The name alone sounds like magic, and I’m sure the place and the experience were every bit just that. 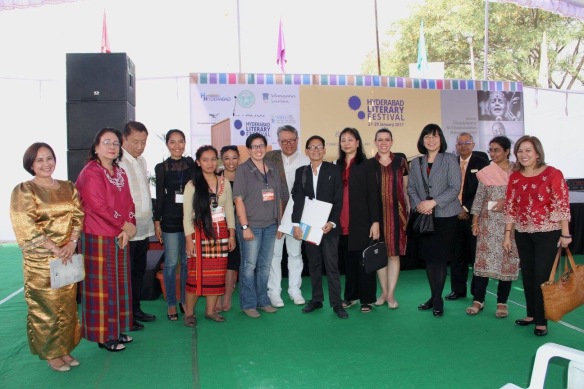