I TRY to give my wife Beng a birthday treat abroad every year—a small price to pay for her manifold acts of kindness and generosity, not to mention her 44 years of patience in sharing a bed with a snorer—so early this June, we flew out to Luang Prabang in Laos. Why Luang Prabang? Because I couldn’t think of a place with a more musical name, and because we’d never been to Laos, and because it had come highly recommended by a dear friend Julie Hill, who’s been all over the planet but who considers Luang Prabang one of her favorite haunts.

With atypical optimism, I’d booked our trip eight months earlier. There are no straight flights from Manila to Luang Prabang, so we spent a night in Kuala Lumpur before making the short hop to LP. 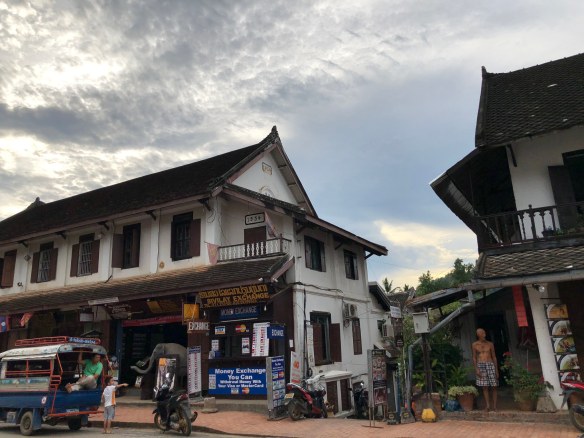 As in much of Southeast Asia, things were cheap, easy, and infinitely interesting the moment we landed. The local currency is the kip, of which you’ll need about 8,400 to buy one US dollar, but for the princely sum of 50,000 kip or $6, we were brought by an airconditioned van to our digs, the comfortable, two-story Villay Vanh Guest House about 15 minutes away. Like many lodging houses in LP, the Villay Vanh was a largely wooden house—shoes off, please—that had been converted into a hotel, and it maintained that homey ambience without sacrificing modern necessities like airconditioning, hot water, and wi-fi.

Of course, you don’t really go to Luang Prabang for the airconditioning, the hot water, and the wi-fi. As it happened, our hotel was a few steps away from a large Buddhist temple on the left, and a river on the right. And should I say that our four-night stay, including breakfast with about a dozen choices from pancakes to beef fried rice, cost all of $52 (that’s for all four nights)? 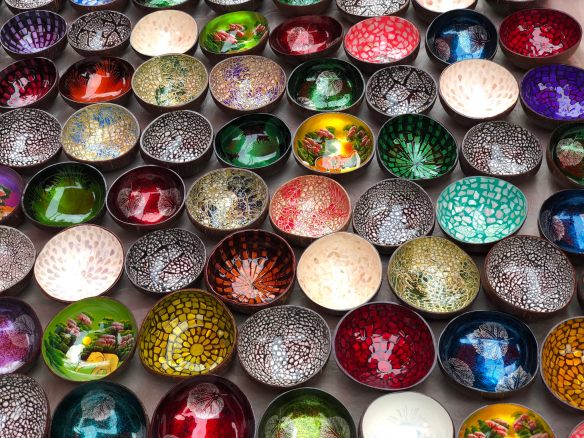 Beng, of course, made a beeline for the night market, which was also just a short walk away, but not before we made the obligatory climb up nearby Phousi Hill, which offered a 360-degree view of the city, the Mekong River, and the misty mountains in the distance. We love to travel around Asia for the markets, the museums, and the food, and LP delivered wonderfully on all accounts.

The night market, where lavishly woven textiles abound, stands right in front of the museum, which is also right next to the food stalls in the public market. I know that many travelers are queasy about eating with the locals, but that’s what Beng and I did, stuffing ourselves on broiled chicken, mudfish, and the sticky rice that’s a staple in Laos, for another 50,000 kip (that’s 300 pesos to us, including a soft drink). Over the next few days, we would discover that Laos has some of the sweetest and smoothest mangoes, which could well put ours to shame. (As well as Laos’ worst-kept secret: all wi-fi passwords are the same anywhere you go.)

The National Museum used to be the palace of the Laotian kings, the last one of whom was deposed in a communist takeover in the mid-1970s. Amid the slightly musty regalia hangs an unspoken horror, that the king and his family, much like the Russian Romanovs, were murdered a few years after they gave up power.

More uplifting was the tour I truly wanted to take—a day trip involving cruising down the Mekong, visiting a Buddhist shrine up a mountainside, having lunch at an elephant sanctuary, then taking in the fabulous Kuang Si waterfalls. At just $40 per person, including a nourishing lunch, it was a bargain.

The Mekong in Laos is the same immutable, undulating, coffee brown that it is in Thailand and Cambodia, but the boats are long and narrow, often painted in pink and blue, somewhat echoing the Laotian flag. Stately villas and temples overlook the river, and now and then elephants peek through the bushes along the banks.

Luang Prabang stands at the confluence of two rivers, one that started out in China and the other in Vietnam. So far from the ocean, it thrives on water—and tourists like us, willing to go the extra mile from Bangkok and KL.

Speaking of China, my wife Beng and I were having lunch at a Megamall restaurant a week ago when we suddenly heard mellifluous operatic voices singing in the lobby nearby. I took a peek and discovered that it was a mall tour to preview Binondo, a Tsinoy musical that’s opening on June 29, Friday, and July 1, Sunday, 8 pm at the Theatre in Solaire.

I got curious enough to seek out its publicist, Toots Tolentino, who told me that this was a love story, set in Manila’s Chinatown ca. 1971, involving a love triangle consisting of Lily, a night club singer and hopeless romantic; Ah Tiong, a scholarly cynic; and Carlos, a childhood friend. With book and lyrics by Ricky Lee and directed by Joel Lamangan, I can predict only good things for this musical, which is being produced by Synergy 88 Digital and Rebecca Chuaunsu Film Production. Rebecca, a theater artist in her own right, also wrote the original story.