THE FIRST and last time I saw a show at the Manila Metropolitan Theater must have been in the 1990s, for a production of Nick Joaquin’s “Portrait of the Artist as Filipino.” The theater was in fine shape then, and I recall being as enthralled by the place itself as by the spectacle onstage.

As a young boy in the early ‘60s, my father had worked at the old Department of Public Works building across Plaza Lawton (before they became the Post Office and Liwasang Bonifacio), and I had often tagged along to play with his red-and-blue pencils and his swivel chair. The most entrancing element in that locale, truth to tell, was the giant pot above the old Insular Ice Plant that spewed what seemed to be a steady stream of boiling water into a waiting coffee cup; but my eyes would stray to the strange pinkish building in the distance and I would wonder what went on there and what it held.

I got my answer, thanks to Nick Joaquin, but a few Sundays ago, I had an even more amazing opportunity to know the Met more intimately than I would ever have imagined. Sadly the intimacy was that which might exist between a doctor and a patient, like a probe of cold steel into some tubercular organ.

My wife Beng belongs to Kasibulan, a group of women artists, and they had been invited to do a sketching session at the old theater that Sunday morning, alongside a cleanup operation to be undertaken by volunteers. Did I want to come along, perhaps to take pictures, or at least hold bags and run errands for the ladies as they drew arches and vanishing points? Of course I did.

But before I go any further, especially for the benefit of our millennial readers, let me give a backgrounder on the Met and its sorry fate.

When the Manila Metropolitan Theater opened on December 10, 1931, it was an architectural wonder to behold and to step into—an Oriental palace in pink coral, crowned by exquisite minarets, statues, sculpture, and tilework. The overall style was Art Deco, the rage at the time, spilling over from the West but adapted to its new setting in the East. It could seat almost 1,700 people, and it had been put together and adorned by some of Manila’s finest architectural and artistic talents—designed by Juan Marcos Arellano, built by Pedro Siochi and Co., and decorated by the Italian sculptor Francesco Riccardo Monti, the sculptor Isabelo Tampinco, the future National Artist Fernando Amorsolo, and by Juan Arellano’s brother Arcadio.

Erected near the site of its predecessor, the Teatro del Principe Alfonso XII which burned down in 1867, the Metropolitan was meant to be the city’s premier cultural venue, a showcase of the Filipino artistic genius. In its heyday, it hosted celebrated singers such as Jovita Fuentes and Atang de la Rama; from highbrow opera to the more popular zarzuela and vaudeville, the Met had the best to offer. Though damaged during the war, it was rebuilt and continued to be a haven for artists and entertainers until it began to decline in the 1960s, as other venues—and the growth of moviehouses in such places as Avenida Rizal, Escolta, and Cubao, followed by the establishment of the posh and modern Cultural Center—gained primacy among audiences.

At one point or other in its slide to abject decrepitude, the Met became a boxing arena, a movie set, a martial arts studio, a gay bar, an ice cream parlor, a TV stage, and a refuge for the homeless, among other incarnations. In 1978, Imelda Marcos took an interest and had the theater restored to its old glory, but then it fell again into disrepair, and was shut down in 1996 in a wrangle over ownership between the city government and the GSIS. Gloria Macapagal Arroyo and Mayor Fred Lim renovated and reopened it in 2010, when it was declared a “National Treasure” by the National Museum, but yet again it succumbed to politics, bureaucracy, and benign neglect; after a concert by the rock band Wolfgang in mid-2011, it was locked up by the GSIS.

In July last year, the ownership question was finally settled with the GSIS selling the property off to the National Commission for Culture and the Arts (NCCA), and shortly after the NCCA received P270 million from the Department of Budget and Management (DBM) for a fourth and hopefully final restoration, which the NCCA expects to complete by 2017.

It was this Met that we entered that Sunday. We were greeted by my UP colleague and one of the restoration project’s consultant-architects, Gerard Lico, who assigned two young but very capable juniors to guide our group on an all-access tour of the building. The lobby was buzzing with the enthusiasm of student volunteers from National University who, after an orientation and a safety briefing, filed into the structure behind their team leaders.

We followed them into a dark and cavernous hulk (the electricity had yet to be brought back), and encountered a touching mix of fragility and resilience. The Met had to be cleaned prior to restoration, and thus we were being privileged to see it at its most hapless state. There was dust and rust everywhere, and the wooden floorboards, reduced to a pulp, were crumbling beneath our feet.

Even so it demanded attention and respect, and we trod slowly, reverentially. Through the squalor emanated a lingering magnificence—the echoes of long-stilled operas, the footfalls of performers scurrying down the corridors. In one room was a tangled mass of costumes—a sailor outfit unmistakably from The Sound of Music—and when we stepped out onto the broad stage, you almost expected the spotlights to burst into life and the phantom audience to roar in approval. There was a hole in the stage floor and water in the orchestra pit, but nothing, it seemed, beyond repair, beyond human care.

Out on the roofdeck, beneath the Moorish spires and the batik-inspired tiles, a small tree had sunk its rope-like roots into the masonry. I found myself hoping that it would be spared the restorer’s saw. Reprieves beget reprieves, and it would provide a fine organic testament to the Metropolitan’s endurance. (See more pics from our walking tour here.) 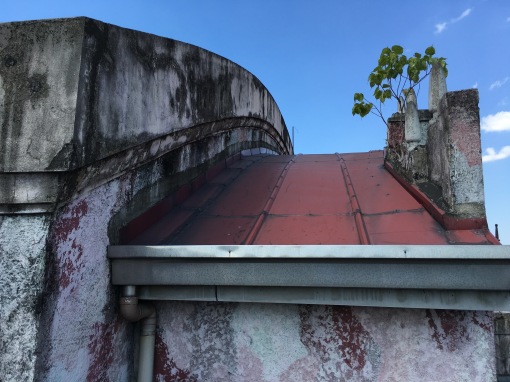