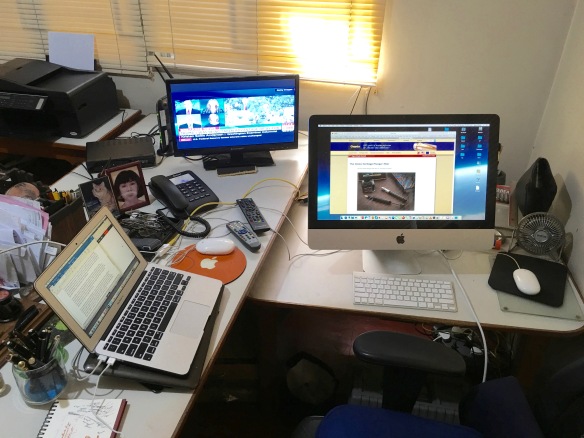 SOME INTERESTING changes took place in my home-office environment over the recent Christmas break. First, as a gift to the household, especially my movie-loving mom, I got a multi-user subscription to Netflix. Second, because of Netflix, I signed up with a lifetime Virtual Private Network (VPN) service, which, among other benefits, allows users to watch US-based offerings (like Netflix, which very recently opened a limited Philippine operation, largely dispensing with the need for VPN). Third and perhaps most importantly for the long run, I ramped up our Internet connection, from the old 5 Mbps to a whopping 100 Mbps fiber-optic line that had just become available in our Diliman neighborhood. The setup then prompted me to acquire an Apple TV unit, which streams Netflix shows, among others, from the Internet to your HDTV set, completing the home-movie experience (well, throw in some popcorn and Coke for the full effect).

If you’re not too tech-savvy and if I’ve left you hopelessly confused by that exasperatingly jargon-laden paragraph, let me unpack it for you, as I’d explain it to someone like my mom. (I should add that my mother is unlike most 87-year-olds. She doesn’t have a computer, but she’s otherwise glued to four devices—her TV, her iPhone, her iPad, and her Android tablet. She loves playing vocabulary and bubble-type games, which keep her brain cells humming, on top of the 20-minute walk she takes every afternoon.)

“Home office” refers to the fact that over the past three decades, with the rise of the Internet and indeed its indispensability to modern living, more people have been able to work at home, or to bring much of their work home. I teach at the university, but most of my writing is done at home. My wife Beng also has her art-restoration studio at home. This means that we have to invest in equipment and technology that will allow us to get our work done, and done well, right where we are.

For me, that means several computers—I use a small MacBook Air as my main workhorse, portable but powerful, with a very fast processor and a large hard drive; for a backup, I have an older, larger MacBook Air, a bit slower, but good to have around just in case the main machine falters or is in repair; I also keep an iMac on another desk for when I need to see larger images, or to have fun surfing (or playing online poker) while I work. Yet another screen is almost always open at my desk: a tabletop TV, on which I keep up with the news.

All that hardware would be of little use without a fast and reliable Internet connection, and here I was lucky to be living in an area now covered by PLDTFibr, which ran a promo over the Christmas break offering a 100 Mbps service for six months (it’ll slide back down to 50 after six months, but you can’t sneeze at 50 Mbps either—and no, I’m not getting anything from the company for this plug, not even a coffee mug).

What does “100 Mbps” mean for the consumer? Webpages load in a snap, instead of crawling down the screen as some circular icon keeps spinning; you can download a 1-gigabyte software update in minutes rather than hours or overnight, as I used to be resigned to; and you can upload large files, say to DropBox or YouTube, without having to knit a doily while it loads. Is it expensive? It cost me only P500 more to level up from my old 5 Mbps service from another provider, which I had been a faithful client of for over ten years.

The best beneficiary of a fast Internet connection, however, is streaming, which is the way those who sell movies and music, like the iTunes Store and Netflix send you their material over the air—in one continuous flow, like you were watching a movie at the theater. But that’s more hopeful than achieved for most Pinoy consumers, because, as of a year ago, the Philippines had the third-slowest average Internet speed, at about 2.8 Mbps, in Asia, according to the folks at Akamai, who keep tabs on these things (No. 1 Korea averages 23.6 Mbps).

That means that your screen will very likely freeze just when things get really interesting in the movie, as your provider struggles to bring up the rest, like those guys who ran reels between theaters in the old days. (Lilia Ramos Shahani wrote a great piece on this for the Star, “Why Is Our Internet So Slow?” last August.)

And there’s nothing better to do with streaming than watch movies and TV shows from where they’re stored—the servers of US-based Netflix, for example, which we used to be able to access only through VPN. (Netflix didn’t want people in countries it didn’t serve—like the Philippines, until recently—to see Netflix shows. The Internet being what it is, some smart folks found a workaround, VPN, which tricks the Internet into thinking that you’re in Tampa, Florida instead of Tuguegarao, Cagayan.) There’s been a lot of argument over whether VPN-enabled Netflix is illegal, but it isn’t piracy—you still pay for Netflix, but are simply diverting its stream to your barong-barong. (I pay about $12 or less than P600 a month for a four-user license.)

That argument is now moot, as Netflix has officially added the Philippines to its serviced countries, albeit with a thinner menu; you’d still need to turn on your VPN to get the full US package (Netflix, however, has rethought its toleration of VPN, so that option might not last. I’m not too bothered, as I value VPN more for the PBS documentaries I like to watch on my iPhone in some traffic jam or over long, boring meetings. VPN is also good for your digital security, masking your real IP address from snoopers.)

The piece de resistance in this upgraded setup is the Apple TV, a small black box that uses wi-fi and your TV’s HDMI port to let you enjoy Netflix, YouTube, and other Internet video—even your own library of movies, music, and photos—on your big TV, instead of squinting at them on your phone or laptop. It isn’t cheap—the gadget costs a bit less than P9,000 for the basic fourth-generation model—but there are alternatives. Chromecast, a thumb-sized thingy made by Google and marketed by Globe for about P2,000, will hook you up to Google Play Movies, YouTube, Spotify, and other entertainment fare.

I’ll admit, it’s hard to think of work when you’re this wired for fun, but you can also say that this what makes all that work worth it—digital Disneyland at the click of a remote-control button.