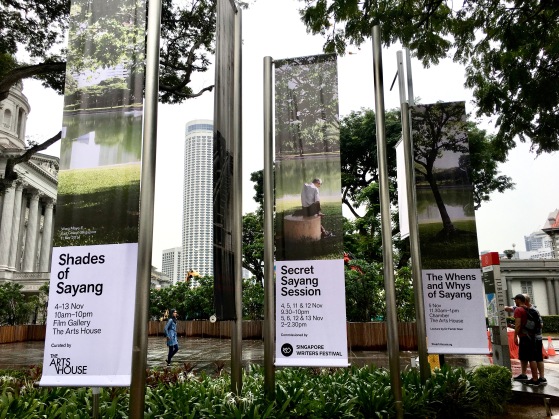 DURING THE Singapore Writers Festival last month, I had the opportunity to chat with two prominent poets from that city-state, Aaron Lee and Eric Tinsay Valles, and I’m sharing the highlights of our conversations to give my readers some idea of what Singaporean poets are writing about. Interestingly, both poets, now just in their 40s, were born outside of Singapore, but now feel very much embedded in that ethnic and cultural melting pot.

Malaysian-born Aaron Lee works as a corporate lawyer in the area of regulatory governance and ethics. “I was born in Malaysia to immigrant Chinese,” Aaron told me. “My father worked for Singapore Airlines so he commuted daily from Johor Baru. It was typical of people at the time to send their children to Singaporean schools if they could afford it. I commuted daily for many years with my passport in my pocket, between the ages of about seven to fifteen. My brother and sister did the same. In our mid-teens we moved to Singapore. After five years my parents moved back but the children stayed behind.

“I feel myself to be 100% Singaporean, but I do have a lot of affection for Malaysia, especially its natural environment, carried over from my childhood. The city can be a soul-crushing place, and this came out in my second collection, where the metropolis looms over you. In my third collection, I rediscover the renewing force of nature. This was also helped by frequent visits to Hawaii, where my wife studies Hawaiian culture. In my 20s, I met senior writers like Prof. Edwin Thumboo who were dealing with the postcolonial condition. I was a law student in college but I had a couple of English literature modules in which Prof. Thumboo lectured. Discovering this whole shared past of English-language literature between Singapore and Malaysia past gave me an intellectual and emotional hinterland, raising my consciousness of Malayan-ness, which is lost on the present generation.

“I began to take my creative writing seriously in my mid-teens, and I was fortunate to have high-school classmates like Alvin Pang who were just as serious about it. I found a community of people who were interested in literature and this was very important to my formation as a writer. After high school I even applied to several universities overseas to study literature and one of them accepted me but it didn’t come with a scholarship, so I decided to take up law instead here in Singapore, which was much cheaper.

“I’m not really conversant in Bahasa except for the kind of colloquial Bahasa you hear in markets. I’ve done some reading in Chinese but can’t write in Chinese. Our bilingual policy has deep flaws that prevent many Singaporeans from acquiring first-language facility with either English or their mother tongue. Many Singaporeans my age will speak English better than their mother tongue.

“My generation came into its own in the 1990s, and there are about a dozen of us poets who have been categorized as third-generation poets in English. Ours was the first generation of non-academic poets. We were lay people, so to speak, professionals engaged in business, journalism, and law. Our poetry is more down to earth. The earlier generations were more concerned with nation-building. We tend to be more personal.

“I’m essentially a lyric poet and I love the way words sound when they’re well put together. I’m concerned with the inner music of words in sentences and lines. As a student, I looked up to poets like Seamus Heaney and Philip Larkin. I’m also concerned with common humanity. My first collection was very personal, poetry about being a poet, but my later collections cast their eye on a wider world, even to current affairs in society and on the international stage. I observe that when people come together in the city, they become anonymized, dehumanized, and alienated from one another. I try to resist that by looking for what we have in common as people, for empathy, compassion, and love. My work might be political in a roundabout way, but at the end of it I always move back from the grand narrative to the person. My Christianity is a big part of my identity, my values, my world view. I see myself as a work of art being fashioned by my Maker. I don’t just want to be a poet, but the poem, a work in progress, a song coming out of the mouth of God.”

Philippine-born Eric Tinsay Valles teaches at the National University of Singapore High School of Math and Science. In 2013, he won a Goh Sin Tub Competition prize, which offers the biggest cash reward for creative writing in the region. Eric was working on his PhD in literature in NUS in 2000, and decided to stay on.

“I was a journalist in Taiwan for six years, and a teacher in Manila before that,” recalled Eric. “It was through Prof. Thumboo that I began to be published in Singapore, through an anthology that focused on the merlion, the very symbol of Singapore. It’s like a rite of passage for Singaporean poets to write about the merlion. Prof. Thumboo has mentored many of those young poets, and he has always been for inclusiveness and for the development of literary traditions in all the languages used here. That’s why the Singapore Writers Festival and the National Poetry Festivals are probably unique in that we have sessions in four languages. Young poets email him, and he responds to them.

“I just feel very fortunate to have met him in NUS. I invited him to speak before some students, and he invited me to attend some poetry sessions, and that was the beginning of a long association and friendship.

“I’m a permanent resident here, but am still a Filipino citizen. I’m the director of the National Poetry Festival here in Singapore and I’m now finishing my PhD in Creative Writing at Nanyang Technological University, working on trauma poetry and on a novella in verse set during the Japanese occupation.

“As a former journalist I got exposed to many human experiences, and some of that has been reflected in my work in terms of empathy for the downtrodden and the marginalized, and faith. My faith is part of my being Pinoy. My second collection is titled After the Fall, and that could allude to the biblical fall and also to the trauma we experience in everyday life. For Singaporean poets, trauma is more domestic, more felt in estrangement from other people such as family. Contentment and complacency lead to boredom, the desire for more wealth brings more tensions, and young Singaporeans grapple with modernity. Much of Singaporean literature deals with this conflict between modernity and tradition.

“I started writing poetry in primary school in Manila. There have been many influences on my work—Elizabeth Bishop, Thom Gunn, Neruda, Lorca, Heaney—but I’ve become very familiar with Singaporean poetry, especially since it’s a very small community.

“There’s about a dozen Pinoy writers working here in Singapore. We even have a couple of Pinoy domestic helpers who participated in the National Poetry Festival, and they read their poems in Filipino. I look forward to my visits home, where I sometimes hold writing workshops.”