BARELY HAD Beng and I returned from VIVA Excon in Iloilo when we found ourselves jetting off again, this time to Guangzhou, China, to attend this year’s gathering of the Asia Pacific Writers and Translators (APWT), which has become one of the highlights of the literary year in the region. APWT has indeed grown into the Asia-Pacific’s premier literary network, drawing its strength from the fact that it comprises and is led by practicing writers and translators rather than by academics, critics or publishers, although many members perform those functions as well.

For the past several years, APWT has held its annual meetings in various cities around the region—I’ve been privileged to attend recent ones in Hong Kong, Bangkok, and Perth, among others—and last year Manila was honored to host the event, led by the University of the Philippines with the assistance of De La Salle University and the University of Sto. Tomas, with support from the National Commission for Culture and the Arts.

Accompanying me in the Philippine delegation were Cristina Pantoja-Hidalgo and Ralph Semino Galan of the University of Sto. Tomas; Jun Cruz Reyes, Charlson Ong, Jeena Marquez, Randy Bustamante, and Mabek Kawsek from the University of the Philippines; and Hope Sabanpan-Yu from the University of San Carlos. (I happily paid Beng’s conference fee so she could attend all the sessions, given her personal interest in translation.) It was also good to see old Manila hands like the Singapore-based Robin Hemley, the Hong Kong-based Kawika Guillermo, and New Yorkers Tim Tomlinson and his wife Deedle Rodriguez-Tomlinson, who’ll be visiting Manila again soon.

This year, our conference host was Sun Yat Sen University in Guangzhou, under the stewardship of the very gracious and capable Dr. Dai Fan, a professor of linguistics and the director of the Center for Creative Writing at the School of Foreign Languages at SYSU. Her university is one of the very few places in China where creative writing courses are taught in English, so it was a perfect venue for APWT, not to mention Guangzhou’s attractions and congeniality, about which I’ll say more in a minute.

Revolving around the theme of “Ideas & Realities: Creative Writing in Asia Today,” this year’s sessions took on such practical concerns as teaching creative writing in English as a second language and networking from Asia to the rest of the world. At the same time, there was always more room for collaboration within the region. As the Australian author Nicholas Jose observed in his keynote, “Writing is a conversation that often begins with the writer’s own community, including editors, publishers, reviewers, critics and other writers. For Asian and Pacific writers, this can be complicated, with borders of language and culture to be crossed, and barriers to the way work becomes available. We need to expand the conversational community. We are our own best advocates and provocateurs. We can create our own audience.”

The keynotes were especially provocative and informative. Flying in from London, Qaisra Sharaz shared her writing life as a woman with multiple identities living in the West in the age of ISIS and battling Islamphobia. A crowd favorite was the US-born Australian Linda Jaivin’s talk on her becoming “The Accidental Translator,” a remarkable life complete with an amazing chance encounter on a Hong Kong subway train that would eventually lead her to subtitle modern Chinese classics such as Farewell My Concubine and Hero.

I was glad to moderate a session on “Creative Writing in the Academy,” where panelists from Australia, the US, China, and the Philippines thankfully no longer had to deal with the age-old (and frankly stupid and annoying) question of “Can creative writing be taught?”, but rather discussed the material and moral support (or the lack thereof) that writing programs received in various universities. In this context, it deserves to be noted—especially given how we Filipinos often tend to put ourselves down—that the Philippines clearly leads the region in the field, with full-blown academic programs, writing centers, and writers’ workshops that go back more than half a century.

Aside from the keynotes and the sessions, the APWT meeting also featured special workshops led by experts in the field, such as Robin Hemley who guided both novices and experienced writers on an exploration of “Travel Writing in the 21st Century.” Robin challenged his workshoppers thus: “How do you write about place in a way that makes the place new? How do you write about a place that’s been written about many times before, Venice, for instance, or Paris? In the 21st century, who is the travel writer’s audience and what are the ethical responsibilities of the travel writer? After all, writing about the most unspoiled beach in the world will surely spoil it. Travel literature is not necessarily for the leisure class but for those who wish to have a better perspective on their own sense of the world and place.” 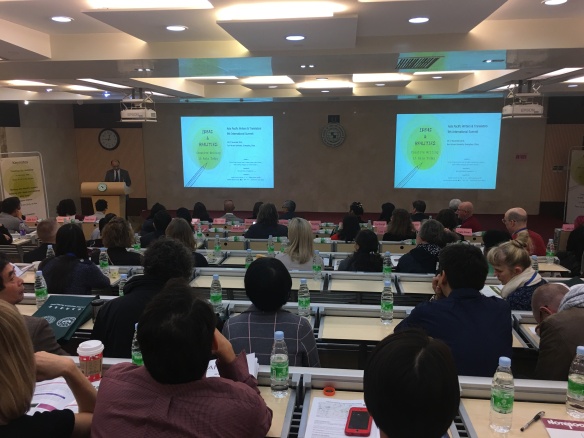 Revisiting Guangzhou was something of a sentimental journey for me, as it was here, almost 30 years ago, that I went with a posse of then-young writers that included Krip Yuson, Ricky de Ungria, Eric Gamalinda, and Timmy Lim. It was our first trip to China, and we had already visited Beijing and Shanghai before stopping by Guangzhou on our way to Hong Kong and Macau. We had stayed in what was the new White Swan Hotel along the Pearl River, and last week I took Beng there on a stroll down the length of picturesque Shamian Island (actually a sandbar on the river, with colonial buildings favored by wedding photographers).

We were told that first time that “You go to Beijing for sightseeing, to Shanghai for shopping, and to Guangzhou for eating,” and that still seemed to be true—the best meal we had all week, aside from the closing Yunnan dinner, was an 11-yuan breakfast of dimsum, xiao long bao, and ma chang in a hole-in-the-wall—but it wasn’t as if Guangzhou was lacking in sites worth visiting—starting with the stately, tree-lined campus of Sun Yat Sen University itself.

On our last day in the city, with our flight not leaving until 10 pm, Beng and I took off for Yuexiu Park, a public park sprawling over seven hills and three small lakes. Within this neighborhood, we explored the subterranean chambers of the mausoleum of the jade-shrouded Nanyue King, then climbed the five storeys of the centuries-old Zhenhai Tower for a marvelous view of the landscape. From that vantage point, one could think only of great literature and great art, capturing for posterity the inexorable passage of time.

Next year, APWT will move to Bali; I can hear the gamelan tinkling.