It’ll only be around for a few days more, but painter Rock Drilon’s latest exhibit at Galleria Duemila on Loring Street in Pasay City is worth looking into, if only to see how a master abstractionist is inspired by the idea and the experience of home. Titled “Homecoming: Works from Dumangas,” the show is the culmination of the past five years that he’s been staying at the Drilons’ ancestral home in Dumangas, Iloilo, after decades of living and working in the big city up north. He’d originally returned to his roots just to help out his aging mother, but the pull of the province proved too strong, and Rock found himself staying on for good.

This is the 61-year-old’s 50th-plus show, and if you’ve followed his career you’ll see familiar figures in his latest work—the loopy lines and amoeba-like shapes—suffused with color, predominantly pastel but pockmarked with black, like life itself. Of course, the wonder of—and, for many, the problem with—abstract expressionism is that a work can seem to mean anything and everything that the viewer brings to the picture.

Drilon cites Chabet, Dubuffet, and Basquiat among his major influences, aside from his mentor Joya, and it helps to appreciate their art as a whole to see a pattern among the patterns. One manifesto seeking to explain the school famously defined it as “violently opposed to common sense,” and you can see that in Drilon’s creations, whose subjects defy categorization but provoke intense examination. No soul-comforting churches, no sunsets, no ricefields here, only squiggles that could be both microbes and galaxies, as minute or as massive as our imaginations will make them. “Homecoming” is on until September 30. 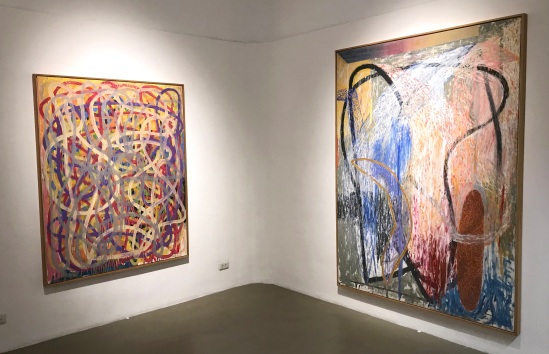 AN INVESTITURE, we’re told, is a “formal ceremony conferring the authority and symbols of high office, held during the new president’s first year in office,” and is a high point in the life of every university. Aside from the annual graduation, few opportunities exist for shows of pomp and circumstance—where the professors and administrators parade in full academic regalia—in universities like UP where egalitarianism is religion and simplicity of dress and manner are seen to complement sharpness of mind.

We had one at the University of the Philippines last Wednesday, in honor of our new president Atty. Danilo “Danicon” L. Concepcion, UP’s 21st, and it occurred to me that in all my 33 years in UP, I had somehow never been to one, although it’s taken place every six years in UP’s modern history. As one of his VPs, I had the honor of marching onstage, and so had a very special view of things.

The experience led me to dig into UP’s history of investitures, where I discovered more than few interesting factoids.

Our very first president, for example, wasn’t only a foreigner—an American—but also a clergyman, an Episcopalian pastor. His name was Dr. Murray Bartlett, and his investiture was held on December 20, 1911—three years after UP opened. About 2,000 students, teachers, and guests trooped to Padre Faura for the afternoon ceremony where—against the expectations of many—Bartlett argued in his speech for a “University for Filipinos” that would not merely copy US universities.

UP’s third president (after the Filipino jurist Ignacio Villamor) was again an American, and a Methodist minister—Guy Potter Benton—and his investiture in December 1921 was memorable not only for its lavish budget of P10,000 and a star-studded guest list that included Governor General Leonard Wood, Senate President Manuel Quezon, and Speaker Sergio Osmeña, but because of a feature that would never be seen again: the UP faculty wore all-white togas, which someone had thought more appropriate for the tropics. (It would be voted out the next year.)

Benton’s illustrious successor, Rafael Palma, had an investiture described as “austere,” but the word clearly did not apply to Don Rafael’s prolific pen, whose 8,000-word speech I clocked at about an hour and a half.

Flashing forward, Onofre D. Corpuz seemed to have spoken in the spirit of martial law when, in 1975, he scorned the notion of the university as a “battleground of ideas,” calling it “a romantic stereotype” which the people could ill afford to support with their taxes.

Edgardo J. Angara’s investiture in 1982 was besieged by a hostile crowd declaiming a litany of complaints—he had dared to start reforming UP’s ancient academic programs, and he would later reconfigure UP into constituent universities—but if anything, his raucous investiture would prove that you can get someone dead wrong, because Angara would go on to become one of UP’s best chief executives.

These precedents were on my mind last week as I sat in my chair behind our new president, who made an impassioned appeal for the university’s constituents to find common ground, favoring “consensus over conflict, civility over calumny, and collaboration over confrontation.” UP, he said, should be “a clearing—a safe, free, and congenial space” within which its people could undertake “cutting-edge research, timely policy studies, exciting new exhibits and productions, and provocative art and literature.” (You can find the full text of his speech on www.up.edu.ph.)

We all cheered him on and wished him well—governing UP can sometimes be as difficult as governing the archipelago—and as we marched down the stage I felt more than a witness to history unfolding.