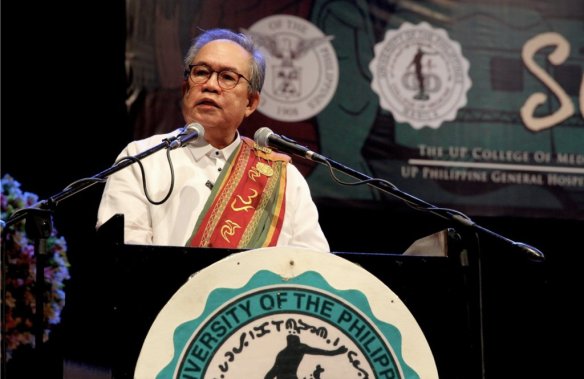 TWO SUNDAYS ago, I had the privilege of serving as commencement speaker before the 2018 graduating class of the University of the Philippines College of Medicine. You’d have to ask them why they chose to invite a writer and professor of English to speak to a corps of medical professionals, but I was happy to accept. It was likely the last time I would wear my sablay as a UP official, as I will be retiring six months hence after 35 years of service to the university. So this, too, was my valedictory, my final opportunity to share with the audience some insights gleaned from my life in UP as student, teacher, and administrator.

Here’s a brief excerpt, about a third, from that talk. Email me if you want a copy of the full text.

Thirty-six years ago, as a young and aspiring writer, I wrote a story about a doctor. The story was set in the Philippine Revolutionary War, and it dealt with an old, cynical doctor named Ferrariz who had made a mess of his life and, seeing few other options, had signed up to become a doctor with the Spanish army, fighting the Filipino insurgents up in the mountains. His unit is taking heavy losses, but one day they capture a rebel—a fifteen-year-old boy named Makaraig, who is badly wounded. Ferrariz’s superior, a major, orders Ferrariz to save the boy’s life.

Let me quote briefly from the story:

… For three days he worked like a driven man, cleaning out and dressing the boy’s wounds, setting the arm, packing cold compresses upon the swellings. He felt godlike in that mission. He unpacked his books from their mildewed boxes, brushed off the fungi and reviewed and relived the passion of the way of healing. He watched miracles work themselves upon the boy and stood back amazed at his own handiwork. When he was through, when he faced nothing more than that penance of waiting for the boy to revive, Ferrariz realized that his eyes were wet. Not since he stepped into the University, knowing nothing, had he felt as much of an honest man.

In other words, this doctor, who had lost faith in his talents and in his hands, suddenly finds himself revived and redeemed by his mission of curing a battered boy. By saving Makaraig, he saves himself.

But the story doesn’t end there. The major has his own reasons for bringing a rebel back to life—to torture and interrogate him, and eventually to kill him, and that’s where the story closes, in a long scream that pierces the doctor’s newly awakened soul.

The story behind the story was that while I was only 28, I felt like Ferrariz, an old man who had gone adrift and who was just going from job to job with mechanical indifference. It was martial law, and despite the fact that I became a political prisoner at 18 and spent seven months in a camp in what we now call Bonifacio Global City, I had been working as a government propagandist for the past eight years, churning out press releases, speeches for President Marcos, and glowing articles about his New Society.

I needed to remind myself that I could write good fiction (what I was writing for work was bad fiction), that somewhere in me was truth waiting to be said.

… For the past 110 years, that has been part of the mission of the University of the Philippines, our national university, the bearer and champion of our people’s hopes. Through our general education program, we try to produce graduates who can be as conversant about Greek tragedy as about the Law of the Sea and thermodynamics. The premise is that a well-rounded, well-educated student will elevate not only himself or herself but also his or her community and society, bringing people together in common cause.

In other words—and it saddens me as a UP professor to say this—intelligence never guaranteed moral discernment or rectitude, and as proud as we may be of our nationalist traditions and contributions to national leadership, much remains to be done to ensure that we imbue our students not only with skills but with principles. In other words, just as we ask physicians to heal themselves, we educators first have to teach ourselves.

This is why I began this talk with my story about Dr. Ferrariz and his seemingly futile gesture. What that story really wants to ask is: What is life without freedom? What is knowledge without values?

There is, indeed, no more life-affirming mission or profession than yours, and in a season of slaughter, to affirm life can be a radical and even dangerous proposition.